Adoption of the WILPF Manifesto: renewing a centennial commitment to peacemaking

Adoption of the WILPF Manifesto: renewing a centennial commitment to peacemaking

Today, 23 April 2015, marks an historic moment for WILPF, as we celebrate the founding of the organisation 100 years ago and renew our commitment to peacemaking by adopting the WILPF 2015 Manifesto.

ABOUT 300 WILPF WOMEN GET TOGETHER TO DISCUSS THE MANIFESTO 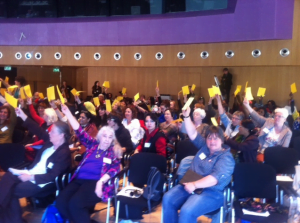 The WILPF 2015 Manifesto, the official declaration of our organisation’s intentions, views and work, has just been adopted by an overwhelming majority here in The Hague, the Netherlands, where WILPF was founded 100 years ago.

The adoption of the document was the culmination of a passionate and enriching discussion during which almost 300 WILPF members from all over the world contributed with their ideas and points of view. Members attending the Centennial Congress, the highest decision making body of WILPF, discussed in particular the potential of the Manifesto as a roadmap to sustainable peace at the grassroots, local and international level.

The Manifesto is the result of a long collaborative drafting and revising process, which included all of our Sections, the Executive Committee, International Board and Anniversary Political Working Group.

“The Manifesto as it appears on the Agenda of Congress has been considered and shaped by many members, so it should be seen in some sense as a collective project” affirms Cynthia Cockburn, main author of the document.

Cynthia Cockburn is a feminist researcher and writer, honorary professor at the Department of Sociology at City University London and at the Centre for the Study of Women and Gender at Warwick University.

COMMEMORATING THE PAST AND LOOKING AT FUTURE CHALLENGES 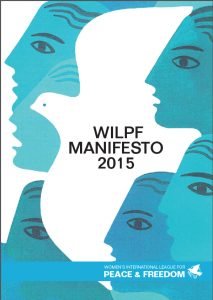 “Reading back carefully into our past renewed my confidence in what WILPF has always stood for,” continues Cockburn. ”I thought recalling those guiding principles, while simultaneously imagining the challenges ahead, might help us reinvest our energies in our beliefs.”

“We are face to face with a hard truth. International mechanisms we’ve trusted, and indeed put a lot of our own effort into creating, are proving unable to end injustice and stop war. So we remember the ones in WILPF who never gave up on the word ‘revolution’,” explains Cockburn.

“We see that only radically transformative movements, inspired by feminist principles and led by the most excluded of women, are likely to bring equality, justice, love and non-violence” she concludes.

Read here the final version of the WILPF 2015 Manifesto.