It has been a decade since the financial crisis of 2008 left millions across the world unemployed, underemployed, unable to access healthcare and education, and facing a generally lower quality of life (and of hope for the future) than their parents’ generation. Now we are yet again facing a serious financial crisis that only begins to reveal how the structural injustices of the financial sector have worsened since 2008. These injustices are deeply gendered in nature as the financial markets value riskier, more “masculine”, and often more harmful goods, services, and characteristics as higher than all the rest.

This is what we see in the expanding corporate debt bubble, which despite being highly risky and harmful, was allowed to grow rampantly. The current crisis is revealing to us the deep cracks in the financial system, which requires deep rethinking and restructuring in order to include those who are impacted by this very system.

A fundamental issue underlying the present and upcoming economic recession across countries is the debt bubble that preceded the COVID-19 crisis. Debt needs to be seriously considered and understood, because a high level of debt has always preceded a major financial crisis. Debt exposes large numbers of people to extreme risk in the face of market fluctuations. Ever since 2008, there has been a steep surge in corporate debt, both in developed and emerging markets. Governments pushed down interest rates in (and since) 2008 in order to bring down the price of borrowing, so as to induce more people to borrow and encourage spending. This resulted in a spike in the purchase of corporate bonds—people started buying more bonds in firms because the (potential) interest they would receive on these would be higher than the (very low) interest they would receive from government bonds or by just depositing their money in banks. This has resulted in a substantial expansion of corporate debt with non-financial corporate bonds alone at $13.5 trillion in 2019, which is twice as high as what it was in 2008.

This expansion of debt also means that a large portion of the new debt is of very poor quality. About 65% of total nonfinancial corporate debt is at the highest risk of default as per credit ratings. About 33% of corporate debt (which amounts to $4.4 trillion) will have to be paid within the next two years as the bonds are reaching their maturity dates. This essentially means that in case of a recession or drastic changes, as we are witnessing now with COVID-19, this debt might not be repaid. This will have very serious consequences for the investors who lent money in bonds, employees of the firms (and those dependent on them), and all the networks to which these firms are linked in a large financial chain.

What happened to the suggested reforms from 2008?

The amassing debt bubble shows how the reforms suggested by financial experts, academics, policy makers and activists were almost entirely ignored in the aftermath of 2008. One suggested reform was to split up financial institutions and financial markets into smaller manageable units, which can be regulated, monitored, and studied more carefully throughout the financial cycle both by industry insiders and government bodies. When this is not done, the financial network becomes enormous, or as was said in 2008, “too big to fail”. However, as Luyendijk and many others have voiced, if an institution is too big to fail, then perhaps it is too big to exist in the first place. Moreover, debt remained unregulated and actually expanded further as shown above; moreover, shadow banking and other unregulated financial activities also increased exponentially.

Another trend was that the largest increase in poor-quality corporate debt occurred in emerging markets in the Global South. If firms in emerging economies default on their debt, this will not only impact the investors but can spiral to cause an outward flow of foreign investors who would move their investments away. This can cause long-term damage by impacting infrastructural capacity building and long-term job creation, making them even more vulnerable to defaulting on debt. This falls within a larger, historical trend ever since decolonisation in which emerging economies are often seen as key sights for international financial investments by high risk-taking investors, who exit these economies in times of crisis, further exacerbating the economic harm caused by the crisis. The lack of regulation on these counts is often justified in the name of having enhanced liquidity, but this ignores the question: liquidity for whom? Corporate debt expands simultaneous to large segments of civil society facing austerity cuts and irreparable decline in their own and their children’s quality of living. And the very groups that are extremely vulnerable to volatility in financial markets do not have a say in the decision-making processes that impact their lives.

Who is going to bear the brunt this time? 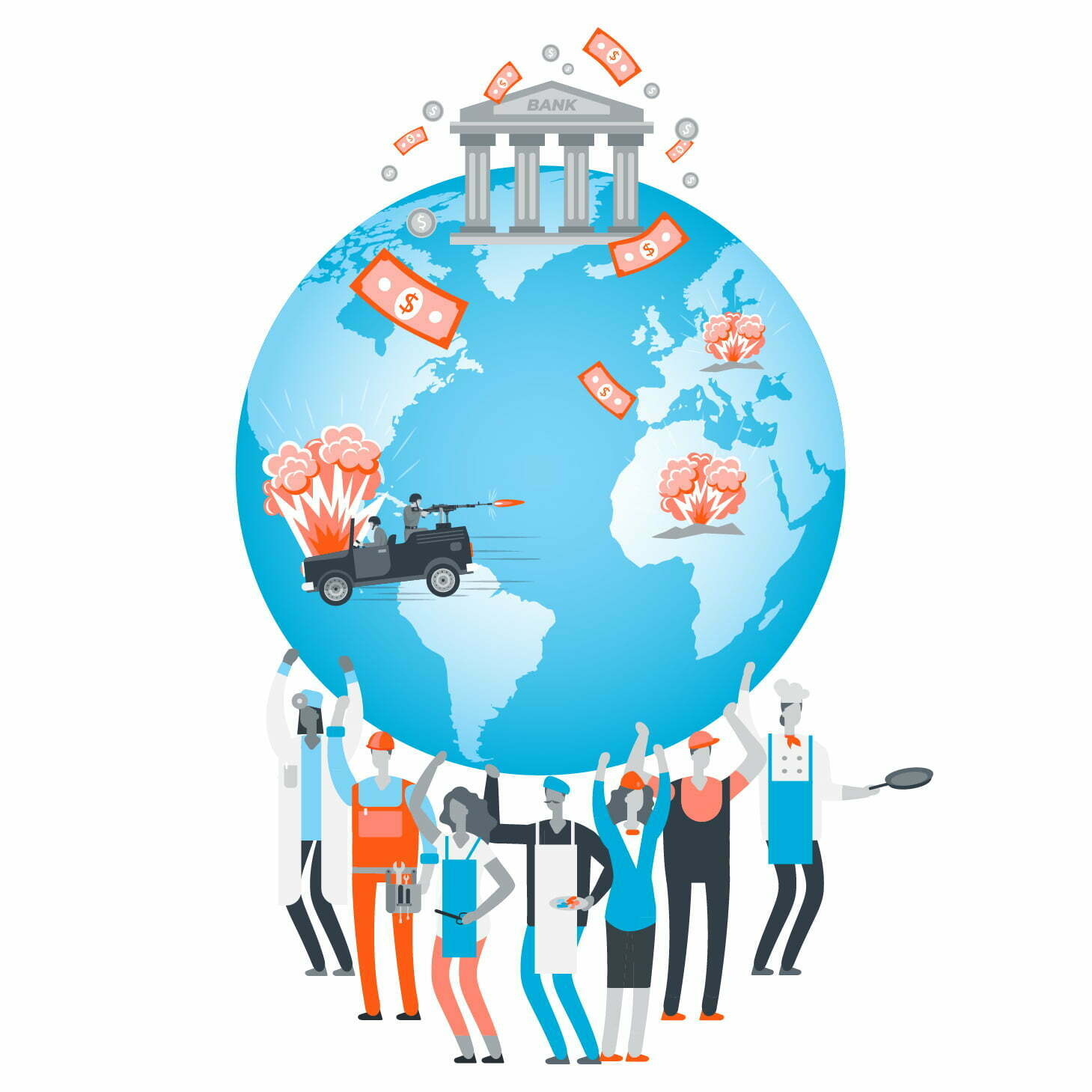 While the financial crisis in relation to the pandemic is truly global, the distribution of harm and risks is not equal. Groups that are going to be, and already are, seriously impacted are middle-class and lower-class citizens, those who are part of informal economies in the global south, temporary migrant labourers, and those employed in service industries. This is being reflected already in the steadily-rising unemployment rates across the world.

This rising unemployment is deeply gendered in its nature. It is becoming evident that over 60% of those losing jobs are women, despite the fact that women usually form a much smaller portion of the labour force due to several persistent barriers in the formal economy. In addition, the sectors that are hit hardest are those generally considered “feminine,” such as, healthcare (including those not directly employed in addressing the current crisis but with expertise in other healthcare issues), education, caregiving, and leisure and hospitality. Even at a time when the relevance and necessity of healthcare, caregiving, and community-building is more evident than ever, those employed in these very sectors are most vulnerable to being laid off. This underscores the larger problem with markets: that the value of services and goods is not determined in an imaginary “free market” but is a deeply gendered exercise in which “masculine” traits (such as brash risk-taking by corporations) is valued as higher than “feminine” traits (such as caregiving), despite the former resulting in harm to large segments of society.

What is a feminist understanding of financial reform?

The ensuing financial turmoil, while exacerbated by the pandemic is not caused by the pandemic. It is taking shape amidst pre-existing structural inequalities and lack of regulation or rule of law compliant with human right obligations over the functioning of financial markets. The absence of regulation is often justified in the name of “freedom,” especially freedom from government interventions. Yet this is an insufficient argument as these financial markets and firms exist because they are provided with enormous support from governments through legal provisions and tax breaks, allowing capital flows. They are hardly “free” from government intervention. What we actually need, though, are interventions that serve those groups of people that are impacted by these markets and not just financial industry insiders.

To include gender in this discussion is not a matter of merely hiring more women on financial boards. What we need is a careful assessment of the interconnected systems and structures that result in large job losses. What are the gendered notions through which value is generated? What is seen to be of greater value and how can this be transformed to result in societies that limit the harm their financial sectors do upon others? How can women truly be included into the discussion at each level without paying mere lip service to their concerns and their communities? It is high time these questions begin to be asked and to be addressed by representative governments, regulatory bodies and financial institutions for markets to have any sort of legitimacy within democracies that make claims to political equality.