“Oh! It is a very delicious product, it has been made with lots of love!” is what Mrs. Fulbia says regarding the coffee she harvests. “Colombian coffee is the best coffee, it tastes of caramel, of fruit!” says Mrs. Luz.

Fulbia and Luz, along with 300 women partners, are a part of the seven women associations that are subscribed to the project “Women coffee farmers build peace in three regions affected by conflict in Colombia.” This is an initiative from the Colombian Section of the Women’s International League for Peace and Freedom (LIMPAL Colombia), an organization that promotes and defends women’s human rights, primarily those of women who have been victims of armed conflict. Thus, LIMPAL Colombia contributes to the building of a society based on peace, freedom, equality, and social justice. 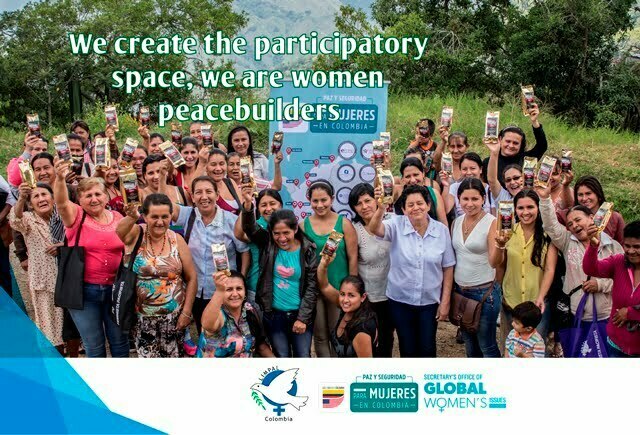 As a country, Colombia is the third biggest producer of coffee in the world and the biggest producer of Soft Arabica Washed, one of the most appreciated beans worldwide. Just alone in 2015, exports of raw, unroasted beans added up to a total of 12.7 million sacks, with 60 kg each. Colombian coffee, like that being cultivated by these women, is appreciated worldwide for its attributes: mild, crisp cup, relative high acidity, aromatic, and has a sensorial profile of high quality.

The labor of these brave women contributes also to building and promoting peace with a gendered perspective in three coffee-growing regions in Colombia: Huila, Tolima and Caquetá. These seven associations of women coffee farmers and their 300 women partners are a part of the 2.7 million people who depend directly or indirectly from coffee cultivation; that is, 33% of rural population in Colombia, according to official numbers. Currently, 726 million jobs derive directly from coffee cultivation, 32% of agricultural employment in Colombia.

There is a great deal of customs, beliefs, tastes for flavors and aromas that surround coffee; there is moreover a grand tradition that has made women coffee farmers’ hard labor visible over time in this important line of work. Either through family tradition or through their spouses, these women work the production line of coffee and throughout empower themselves, reduce gender-based violence, and learn to defend and exercise their rights as women as well as coffee farmers.

While holding a hot cup of coffee in her hard-working hands and with a contagious smile on her face, Mrs. Nelcy says: “I want all the world to try this coffee, that everybody knows that this coffee is Colombia’s gold.”

Empowerment is the key word

This initiative by LIMPAL Colombia is supported by the United States Department of State (USDS); by subscribing to it, these women are being trained to certify themselves as Fair Tradeâ producers and their product according to the requirements of the Organic Seal of the United States Department of Agriculture (USDA). Thus, they are strengthening their capacities as produces and receiving support in order to obtain a better retribution for their product. Within this process, they are also learning about Colombian legislation regarding women’s human rights issues such as prevention and sanctions against forms of violence and discrimination against women (Law 1257 of 2008), measures of access to justice for victims of conflict-related sexual violence (Law 1719 of 2014), and women’s participation in peacebuilding (UN Security Council Resolution 1325 of 2000 on “Women, Peace and Security”).

Thus, the project “Women coffee farmers build peace in three regions affected by conflict in Colombia” begets a wager upon the construction of a sustainable, lasting peace; one that is inclusive and comprehensive of women’s experiences and needs. Hence, the economic empowerment of women gives them the opportunity to advance innovation in coffee cultivation and show to the world their capacities and their vision for the future. They open pathways and widen their participation in a sector that has been mainly dominated by men. And not only that, but they garner tools and strategies to prevent and report violence against women.

With this experience, they have achieved expanding their opportunities to other women, so that they can also provide a dignified life free of violence for themselves and their families. “By cultivating coffee I could afford education for my children and, now that they are all grown up, I can live from my earnings” states Mrs. Nelcy, beaming proud of the fact that she has made her dreams come true. Throughout their different activities in diverse settings, women coffee farmers mention their ambition to expand the opportunities they could generate to further countrywomen: on one hand, coffee cultivation as a response to new peace stages; and on the other hand, the possibility of finding new pathways toward economic independence, as well as empower their roles in zones once reigned by conflict. 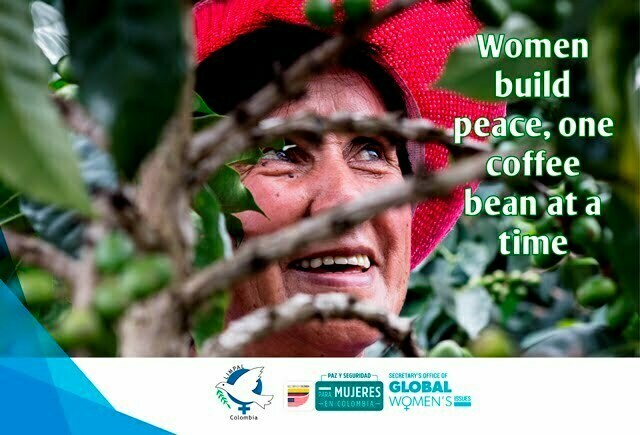 “In order for my children and myself to get by, I used to grow poppy” commented one of these women, and continued “now I am happier growing coffee because we even get financial support and education. Now we are entrepreneurs and can reach many different countries.”

So, this intervention generates a solidarity network among women participants. Many of them have been direct victims of armed conflict, or have been indeed combatants in it during the 1980’s and 1990’s.

Even though this project, by women and for women, is only in its initial phase, it has already achieved offering a line of work that is empowering, both economically and in their rights. In this way they are able to develop their life projects in freedom and building peace one coffee bean at a time.

“Being a woman coffee farmer means being an entrepreneur,” says Mrs. Luz. The livelihood attained through coffee cultivation has made it possible for them to harness a home, stability and education for their children and themselves.

There can always be more participative spaces in these regions. This group of women continues its process, growing and engaging more women. Many of them work to widen their productive capacity and participate in further stages of coffee production, “I would like to invest in my own coffee dryer” says Mrs. Olivia.

An important part of this project -one our readers can actively contribute to- is helping these women coffee farmers achieve the opportunity to participate in the 5th International Women’s Coffee Alliance (IWCA) in Mexico. The objective of this annual convention is building the capacities of women as part of the international coffee community in order to achieve significant and sustainable lives, thus fostering women’s participation in all aspects of the coffee industry. This convention will take place from the 3rd until the 5th of August 2017 in Puebla, Mexico. Please check out our crowdfunding campaign and help them go there!

Finally, Colombian coffee is recognized worldwide for its taste and aroma, but also for the hard labor of men and women who, with love and devotion, specialize in every link along the production chain of coffee beans. Today, this project exposes to the world the capacity of these women, who were once victims of armed conflict in three regions of Colombia. Their labor and zest for coffee has made it possible for them to recuperate their lives, have hope and contribute to peace. As women coffee growers, they are empowered to uphold their rights. 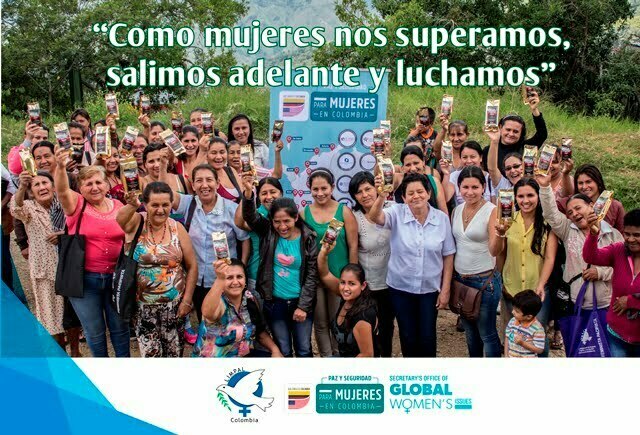