58th Session of the Committee on Economic, Social and Cultural Rights (CESCR) is Coming Up

58th Session of the Committee on Economic, Social and Cultural Rights (CESCR) is Coming Up

The International Covenant on Economic, Social and Cultural Rights will from the 6-24 June 2016 be reviewing the following countries: Angola, Burkina Faso, France, Honduras, Sweden, The former Yugoslav Republic of Macedonia, and United Kingdom of Great Britain and Northern Ireland. 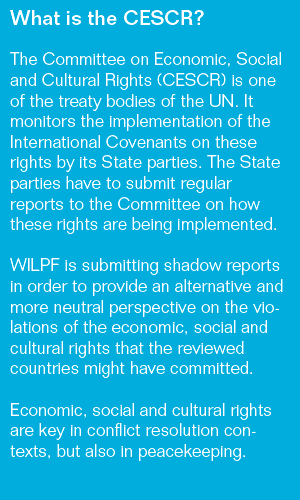 WILPF has handed in shadow reports on France, Sweden, and United Kingdom of Great Britain and Northern Ireland. These three reports focus on explosive weapons and the right to health, education and adequate housing and the extraterritorial obligations of these three European countries.

WILPF has focused particularly on the export of arms to Saudi Arabia. If we take the case of the United Kingdom, it was found that the government had not rejected a single export license request since March 2015 on the basis that it might be used to repress internal human rights.

Regarding France, it is no better, as the country is the biggest European Union exporter of arms to Saudi Arabia, and has continued to sign arms agreements since it began its military intervention in Yemen.

Finally, concerning Sweden, even thought the state did not renew its military cooperation agreement with Saudi Arabia, this did not imply the end of arms sales.

In the reports, WILPF is denouncing the violation of the rights to adequate housing, health and education outside of European territories. The export of arms to Saudi Arabia is violating the rights of Yemenis because of the conflict situation and the use of these weapons from Saudi Arabia to Yemen. Such exports do not comply with the CESCR and neither with the ATT.

The reports are now sent to the CESCR Committee and the review will happen on 6-24 June. WILPF will continue to monitor the process and keep you updated on the CESCR outcome.

Watch this webinar to learn more about UN treaty bodies.