WILPF has been extremely busy at the Global Summit to End Sexual Violence in Conflict hosted by the UK Foreign and Commonwealth Office in London this week.

Apart to catching sneaky selfies with Angelina Jolie, WILPF has hosted three side events with a delegation of over 30. One of the volunteers, a law student in the UK, Chiara Cordone has written about her time with the WILPF delegation and the summit.

As your average undergraduate student, it will come as a surprise to no one that I do not like early mornings. However I found myself awake and on the train at an ungodly hour (7:00 am) for once without the slightest shred of resentment.

The subject matter of the Global Summit to End Sexual Violence in Conflict is hardly a topic for joy but I fear I cannot keep the glee from my voice when describing my first day there with Women’s International League for Peace and Freedom (WILPF).

I have a particular interest in international humanitarian law (IHL), and intend to hone my studies to its application in conflict with a gender perspective. The summit could be phrased as a once in a life time experience. It is, it would be even if I were simply attending as a member of the public, but I am lucky enough to be here with WILPF which has made it all the more fascinating. Perhaps this will explain my contentment and even excitement at being up in the early hours. 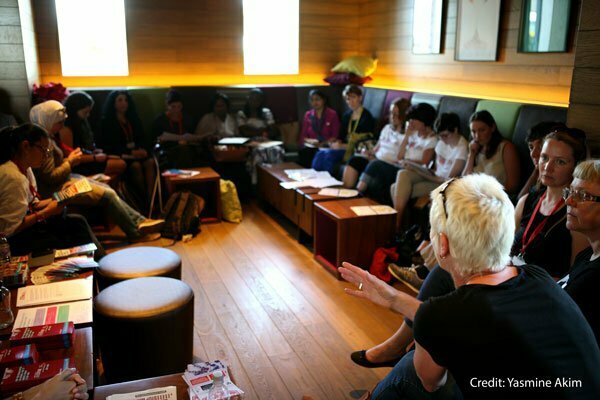 Listening to their orientation meeting gave me a small glimpse of the colossal work that has been done, in terms of sheer organisational power to get women from all over the world to come as delegates, along with the masses of work being done on the ground.

As I watched in awe, I couldn’t help feeling similarly to when I was a small child and would wish to be a grown up so I could do things like stay up past bed time and watch TV after 9pm. I wished to be done with school and be a member of such organisations like WILPF. I’m hoping this will be the first step.

The most striking thing for me, has been working with a group that is all women. It surprisingly refreshing. Perhaps the highlight of Tuesday was WILPF’s panel discussion on the violence in Syria. I have attended various events through my university about conflicts, where the gendered aspect of the violence is often ignored, or given a cursory mention by usually a male academic.

This is not to say that these people have nothing of value to say, but at the summit and being able to see experts, who are Syrian women, working in Syria (or on Syria in neighbouring Lebanon) is quite something else. Testimony, analysis, and discussion, all done by Syrian women speaking on behalf of themselves was more compelling than anything else I have heard or seen on the subject.

The discussion went deeper than merely the fact of violence, into the way it impacts women who are not direct victims as well, that such pervasive violence has a profound effect upon everyone.

The event discussed women’s roles in preventing and ending violence in their own communities, which I had not yet heard commented upon in any formal forum. The work that WILPF and it’s partners have been doing in this area is clearly singular and invaluable.

Another event I attended at the ‘Fringe’ section of the summit was the first part of a mock trial of UN Security Council Resolution1325, tone of the first that established the Women, Peace, and Security agenda.

Aside from the official events, watching WILPF backstage as it we’re has so far been fascinating. Seeing the inner workings of an organisation like WILPF, from how it’s members from all over the world coordinate and relate to each other, the logistics of organising 30 delegates, down to making tuna and mayo wraps with them for lunch, has been eye-opening and enjoyable.

I hope that I can help in at least a small way for the WILPF members during the summit, but one cannot help but feel humbled when watching them work, they truly are an incredible organisation. I return excited to continue working with WILPF at the summit, to learn and see more about a subject that is not only dear to my heart but of immense importance to the global community. And I am still delighted to be getting up so early.