As September draws closer, we are coming to the final stages of negotiations over the Post2015 Sustainable Development Goals (SDGs) and Financing for Development, which will guide the next fifteen years of development planning.

Next week, on 22-25 June, governments will begin to negotiate the Zero Draft of the Outcome Document for the Post-2015 Development Agenda, which was released on 2 June. The final framework – including a declaration, goals, and follow up and review framework – will be adopted in final form in New York in at a General Assembly high level summit 25-27 September.

As this process continues, WILPF continues our call to promote a conflict prevention approach to development and to remind states that integrating women’s human rights and disarmament into the final framework and financing will be critical for sustainable development and peace. 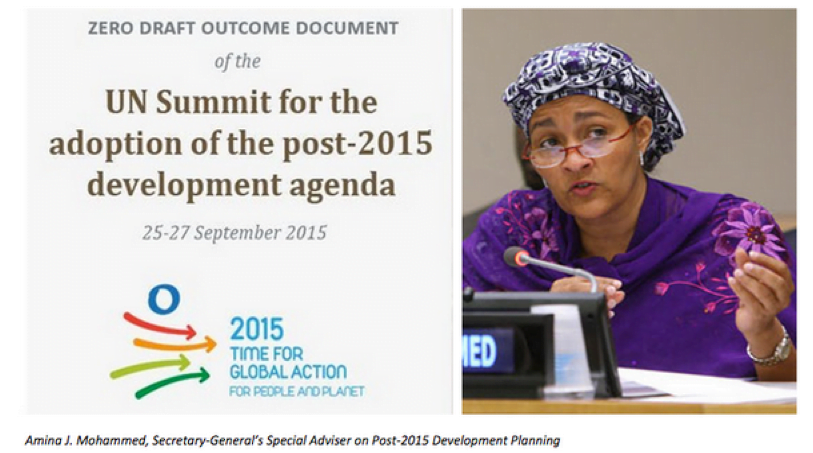 WILPF is joining our coalitions, the Post-2015 Women’s Coalition and the Women’s Major Group, in welcoming the attention to gender equality and peace in the Zero Draft but bringing attention to outstanding gaps which must be addressed in the final framework and financing mechanism to ensure women’s rights, sustainable development and peace.

While the draft framework continues to include a stand-alone goal on gender equality (goal 5) and on stable and peaceful societies (goal 16), its voluntary follow up mechanisms, disconnect from existing human rights monitoring mechanisms, and restricted targets and indicators fail to capture the ambition needed for transformative change. A key gap is its failure to build in the 1995 Beijing Declaration and Platform for Action in demanding a reduction and redirection of military spending into gender equitable social development.

WILPF is supporting a campaign led by the World Future Council/International Peace Bureau that demands a reduction in military spending to free up resources for sustainable development. The campaign specifically recommends that the final outcome document of the Financing for Development Conference in Addis Ababa include language on reducing and reallocating military budgets to fund the SDGs. It also recommends the establishment of an expert inter-agency working group, within the context of the UN High-Level Political Forum, to develop a roadmap to realise such a reduction.

The next few months provide several critical opportunities for NGOs and civil society to engage in crafting the Post-2015 Agenda.

The Intergovernmental Negotiations on the Outcome Document 22-25 June and the High Level Political Forum 26 June – 8 July are the final stages of the SDG drafting process before they are adopted in September. The 3rd Conference on Financing for Development in Addis Ababa, 13-16 July will also be critical in crafting a financing agenda for implementation.

Raise your voice! Join the campaign.

Push your governments to commit to reducing military spending and redirecting those resources to gender equitable social development. Join other civil society partners in financing discussions and bring attention to disarmament financing. Remind policymakers that there can be no development without disarmament and women’s human rights!