After the Hague Congress: Thinking From an Independent Perspective

After the Hague Congress: Thinking From an Independent Perspective

One of the most productive times in the WILPF’s history was its beginning. At The Hague Congress, WILPF founders adopted a paradigm that reflected their own beliefs. These women worked independently of the decisions of their governments, which had excluded them from policymaking. The WILPF’s founders thus enjoyed the freedom to conceive and propose resolutions that reflected their independence. The Hague Congress approved 20 resolutions, statements that influenced nine of the 14 points in Woodrow Wilson’s framework to end World War I. The League’s founders thus contributed decisively to new international laws, to a culture of resolving conflicts by negotiating, and thus to a more just order.

Separating ourselves from institutions and adopting an independent paradigm increases our ability to transform reality.

Separating ourselves from government policymaking and operations gives us greater freedom to think. This separation also increases our ability to transform what we need to transform, and some feel that it allows us to aim higher. We should remember the latter point as we lobby our governments to adopt policies and especially when we collaborate with governments (for example, basing National Plans on UN Security Council Resolution 1325).

Another lesson from The Hague is that the intent of the approved resolutions was not just to improve the status of women. As the product of the aforementioned independent paradigm, these resolutions set goals that benefit the entire population, world order, and international law. Most of the goals the WILPF founders identified as crucial to achieving permanent peace remain unmet. Three examples are pledging not to resort to war, demanding the end of secret treaties between governments (what happened with the TTIP is a good example), and universal disarmament.

The declarations and conclusions of the Manifesto approved in The Hague in 2015 are universal in nature. They aim to make the world a better place for both men and women. 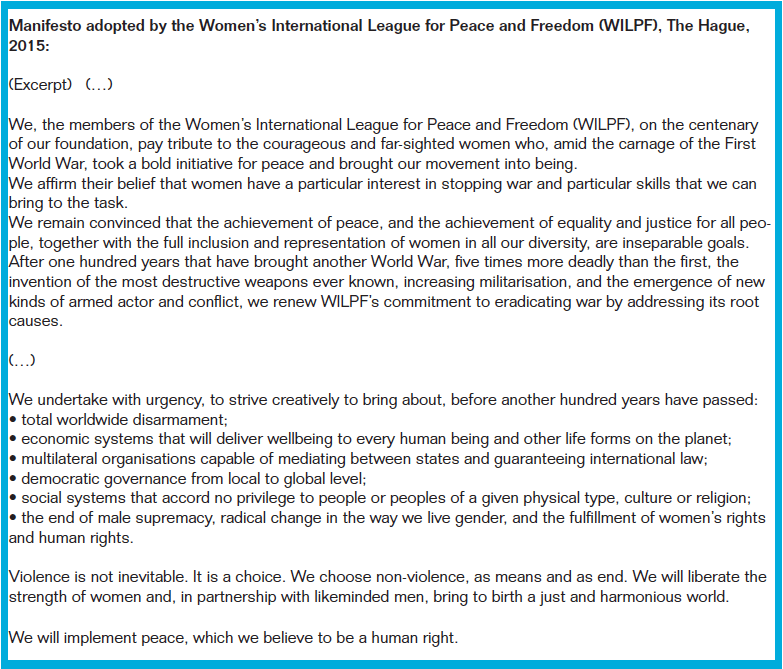 I think that we now need to reaffirm and stress the WILPF’s mission and program. They are rooted in the lives of women and in a gender perspective, but are not limited to addressing gender problems exclusively.

Our perspective, naturally, concentrates on women and gives special attention to their situation, but that perspective is not limited to women.

Expanding the concept of equality with determination to influence international politics is a WILPF hallmark. This movement consists of women who promote peace, finding support in the unity of women from various backgrounds and ideologies. We do not, however, idealise the WILPF movement. What we’ve learned and what we find rewarding is how, despite the conflicts that have arisen within the movement, it has sustained itself for more than 100 years.

Catia Confortini examined the WILPF’s history and identified a methodology for facing conflicts within the organisation that she called “Intelligent compassion.” Her summary emphasised that Intelligent compassion helps us to imagine ourselves in the position of others. It also drives us to seek empathy among our emotions without discarding reason.

From victims to promoters of peace

War victimises men and women differently. I’ve written elsewhere that I’ve always considered my father, who was conscripted to fight in the Spanish Civil War when he was just 17, was a victim. My grandparents lived in both cities and the countryside, more or less behind the front lines. Their recollections of experiencing bombings, death, and shortages made clear that they were protagonists in the conflict. They showed incredible strength by maintaining the lives of their communities.

In Colombia, women victims are demanding truth, justice, reparations, and a commitment to maintain peace. They are also Colombia’s strongest force for peace. The Women’s Truth Project conducted by Ruta Pacífica: Colombian Women for Peace has collected the testimony of nearly 1,000 women. These women’s stories show us how most of them responded to victimisation by using multiple strategies to promote peace. These women also believe that peace is inseparable from a justice that is more than just the end of violence. Justice involves land, personal safety, and safe living conditions. Colombian women have founded many organisations that united at a national summit to advance the peace process. These advocates strove to overcome difficulties and demand a place at the negotiating table in Havana. Their efforts relied on international support and various documents that feminist pacifism has secured, such as UN Security Council Resolution 1325.

In addition to making demands, women have a legacy to offer. Many historical and contemporary examples prove that women have not just been victims of subordination and violence. Many have held authority in their communities, such as scientists who supervise their colleagues, or many other types of authority. Other women, the majority, remain anonymous but develop knowledge and experience. They provide care, sustain life, and do other essential work that represents a legacy for all of humanity. The legacy that these women have built is essential to achieving peace.

Women have endured a long struggle to achieve equality, and gone from making demands to providing resources. They have thus demonstrated the power what the philosopher Alexandra Bocchetti described when she wrote:

I agree with Bocchetti, and would add that there is also no access to politics, to literature, to the economy, to or science. There is no access to language…if we don’t recognise what we have instead of emphasising what we lack: creating something new in the world requires that we start from what we have.

By Carmen Magallón, President of WILPF Spain and member of WILPF Academic Network 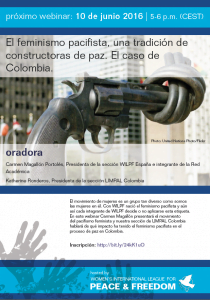 On 10 June, WILPF is hosting a webinar on pacific feminism and the case of Colombia. The webinar will be held in Spanish. Click here for more information and registration.