An Escape Route to Gender Violence

An Escape Route to Gender Violence

Angie Lorena Nieto, Diana Tatiana Rodríguez, Angie Carolina Pineda Sierra, Jazmine Adriana Martínez…the list goes on and on. They are the names of girls who have been sexually attacked and killed in Colombia since the beginning of 2019.

According to the National Institute of Forensic Medecine, in Colombia, approximately 55 girls and adolescents are raped on a daily basis, and every third day one of them is brutally killed.

WILPF Colombia works to raise awareness about this societal issue and advocates for women’s rights in the country. They insist on the idea that sexual violence is a crime against humanity and that State should guarantee victims access to justice and emotional recovery.

Listening to youth and make them part of the change

During the entire year of 2018, WILPF Colombia worked with UNICEF on collecting more than 190 testimonials of girls and adolescents about the context of sexual violence, how they perceive it and how it impacts their lives.

The project’s goal was to strengthen the capacity of community response for the prevention, protection and attention of violence against women and girls, in coordination with the competent local institutions.

Getting in touch with girls and adolescents was challenging and required WILPF Colombia to implement a two strategy approach. First, they talked with the teachers and principals of schools’ municipalities, told them about the project and asked their consent to speak with the parents of their students. In addition to socialising the project, these discussions helped to obtain the parents’ permission for their daughters to participate.

In parallel, WILPF Colombia contacted the social and women’s organisations in the territories of the project and convened a meeting to arrange these women leaders’ daughters to participate. 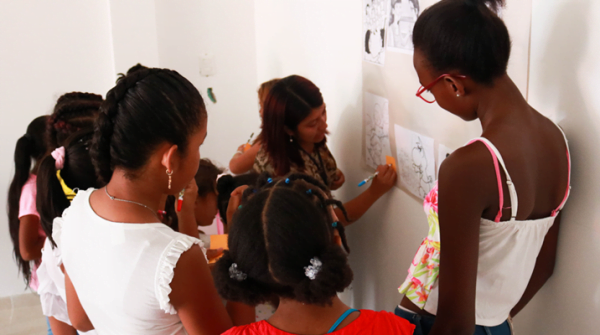 After hearing the first testimonials, it becomes clearer and clearer that despite their young ages, girls and adolescents are fully aware of the violence around them. They try to stay strong and to protect themselves. But their ways are limited. Avoiding walking alone is not sufficient. They need the support of the government and the local authorities.

Facing danger has made these adolescents grow fast. Like adults, they claim their human rights. They want to find solutions in order to nurture their dreams.

“It is important that we know that no girl or boy should fights wars, but instead they should be making their dreams come true,” said a girl during one of the project’s workshops.

Included in the brilliant solutions they proposed in the project’s workshops, are

The history of Colombia had clearly an impact on this last proposal. If something important was left from the Colombian Peace Agreement is thinking about alternative ways of justice systems. Colombian people and especially youth are keen to have a justice in favour of the dignity of victims and not only focused on the individual perpetrators. 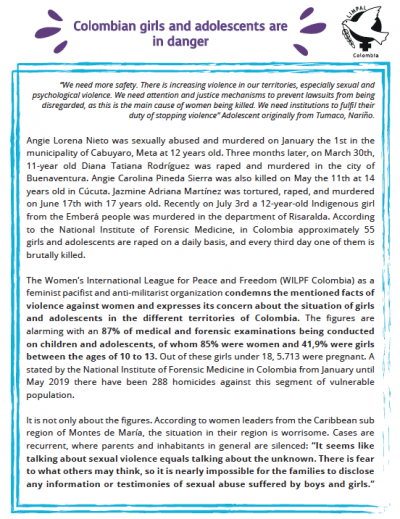 After the UNICEF project, WILPF Colombia had data to rely on and worked on a press release to raise awareness about the frightening increase in gender violence. Girls and adolescents’ future should not be tainted by sexual violence.

They contacted journalists and organisations to help them spread the press release and to bring the subject in the news.

For journalists, the figures in the press release were very important because, for the first time, data comes from local coordinators who work in territories where the violence is happening.

The information was broadcasted on one of the largest radio news networks in Colombia as well as many other local radios. WILPF Colombia Directress Diana Salcedo was interviewed on Contagio radio, a radio specialised in human rights issues.

She used this opportunity to remind that the Section calls the State to implement prevention policies and culture transformations in schools and universities so girls and boy’s rights are preserved for the future of the nation.

Read the Statement “Colombian Girls and Adolescent Are in Danger.”