Arms Are at the Centre of the Problem

Arms Are at the Centre of the Problem 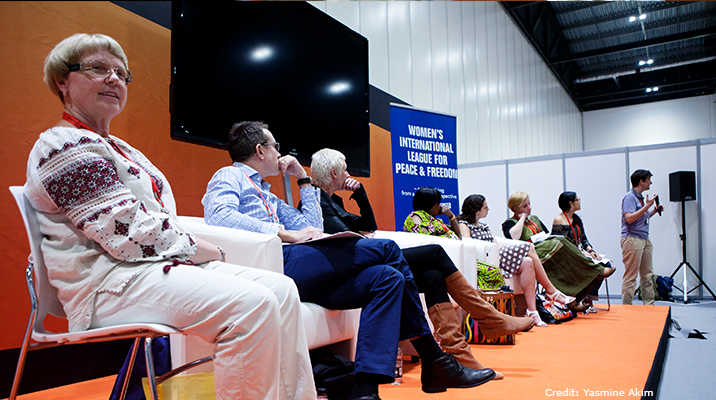 Last week WILPF hosted three fringe events at the Global Summit to End Sexual Violence in in Conflict.  One of these was the event Gender and War: Impact and Solutions, on the 11th of June.

A packed room listen intently to the discussion, which was structured in three parts– gender dynamics in pre, during and post conflict. The panel consisted of civil society experts from Syria, the Democratic Republic of the Congo, Ukraine, South Africa, Colombia and Bosnia.

Annie Matundu, President of WILPF DR Congo framed how we understand sexual violence and pointed out that violence continues after a conflict has officially ended. When the fighting stopped in the DRC, she said, the men who came back to their homes found that they had ‘lost their power’. Women have run the households independently for years and subsequently have become less reliant on their male partners.

This change in the dynamics threatens one of the core cultural norms around which traditional masculinity is constructed. As a reaction to this, many men turn to violence. Women’s security is threatened because they have challenged gendered power relations. After a conflict has concluded, these masculinity norms must be addressed as part of preventing “post conflict” violence.

Dean Peacock from Sonke Gender Justice network in South Africa spoke about norms around masculinity, violence and militarism as a driving force behind sexual violence.

He highlighted an argument that was brought forward by many women’s rights activists during the summit, which was, when discussing sexual violence we must move away from the false assumption that northern and western countries are “bringing the solution to a problem that exists elsewhere”.

The problem is global and gender is at play in multiple contexts, such as the political sphere, the private sector and in different geographical areas. We need to discuss for example, the construction and effects of masculinity norms in the male dominated arms industry, entrenched traditional masculinity norms in such industries, which indeed constitute a key player in conflicts all over the world where sexual violence persists.

“The international security system has expired – we don’t have rule of law anymore, we have the law of arms”. This is what Olena Suslova, from the Women’s Information Consultative Center in Ukraine stated when asked about the impact of arms proliferation and militarism on gender relations and women’s security.

The uncontrolled international trade in arms is one of the root causes of violent conflict, and a tool that is used to uphold unequal power relations between men and women in conflict as well as in peacetime.

Laila Alodaat, a Syrian human rights lawyer and WILPF’s MENA Agenda 1325 Project Associate, commented that arms are at the centre of the problem. Her recommendation to all exporting states is to “Stop taking arming dictators lightly!” Regardless of contractual obligations Laila Alodaat emphasised to states, that these weapons will be used to kill the people.

We must start demilitarising our every day life, was the message from the panellists. This is true not only during conflict, but also in post-conflict and peacetime. Katherine Ronderos from WILPF Colombia stated we must challenge conventional methods for implementing peace agreements. “We don’t need more militaries around”, post conflict reconstruction should rely on civilian methods involving civilian agents.

On the note of post-conflict justice, Gorana Mlinarevic, a researcher from Bosnia and Herzegovina spoke about gender injustices in post war Bosnia. The families of perpetrators of sexual violence during the war are being taken care of, Gorana remarked, while the women who survived the violence have had to struggle to achieve their basic needs such as feeding their children and finding somewhere to live.

Once again it is clear that women, including women from civil society, must participate meaningfully in all peace and justice agreements. The gendered dimension of conflict experiences must be reflected and acted on in a way that promotes equality rather than uphold patriarchal norms through unfair distribution of political power and economic resources in post conflict societies. 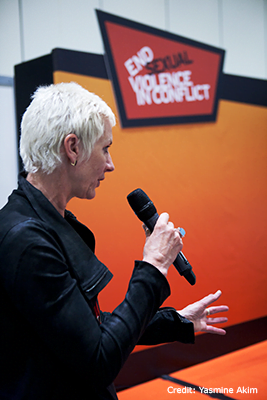 With this event, WILPF brought together advocates from various countries to show the complex gendered causes and consequences of violence that exist differently in pre, during and post conflict settings.

The event achieved its goal of creating a space at the summit on such topics, which were being excluded from discussions elsewhere.

WILPF is advocating that by recognising that the prevention of sexual violence must come with preventing conflict. Both of which cannot be achieved without disarmament, inclusion and gender equality.

WILPF Secretary-General, Madeleine Rees, ended the discussion by summing up the panels recommendations for action and inviting all to be part of WILPF’s movement – Women’s Power to Stop War!

Read the full text on key issues and recommendations discussed at the event.