Can a Movie Bring an Indictment for Crimes against Humanity? the Case of the Nobel Peace Prize-Nominated ‘No Fire Zone’

Can a Movie Bring an Indictment for Crimes against Humanity? the Case of the Nobel Peace Prize-Nominated ‘No Fire Zone’

The screening of the Nobel Peace Prize-nominated movie No Fire Zone by Callum Macrae at the UN premises during the Human Rights Council (HRC) sparked major international controversy over the issue of accountability of Sri Lanka ahead of the HRC. WILPF International attended the event, co-sponsored by Amnesty International, Human Rights Watch and the FIFDH, which raised a thorny question: can a movie bring an indictment for crimes against humanity?

The film is particularly compelling because it is the first feature-length film to document the horror of civilian killings during the Sri Lankan civil war (1983 – 2009) in a way almost never done before. Mobile phone and small camera videos recorded by both victims and perpetrators are used as evidence of the war crimes. But what makes the film compelling makes it also hard to digest: no atrocity is spared to the viewer and no fiction filter is provided to make the images of massacred bodies and people screaming less horrific.

But that is precisely the intended aim of the film: showing the horror to shed hopeful light on the truth. The Channel 4 TV documentary, as a matter of fact, is the culmination of three years of journalistic investigation aimed at denouncing the shelling of an estimated 40,000 to 70,000 civilians in the first few months of 2009 by the Sri Lankan Government. The film is intended as evidence for indictment for some of the worst crimes against humanity of recent times.

The civil war through the director’s  eyes

Watching the day-to-day account of the last 138 days of the 26-year civil war between the secessionist army of the Tamil Tigers (LTTE) and the armed forces of the Sinhalese Government, the viewer find himself asking the apprehensive question ‘when will it end?’ and the even more disturbing interrogation ‘who is responsible for that?’ The war ended in 2009, but the second question is still unanswered.

The director stresses that the film is ‘no academic exercise in historical accountability’ because the men responsible for the massacre are still in charge. He hopes the film will help bring justice. Without truth-telling and without justice, he warns, ‘history is destined to repeat itself with yet more bloodshed’. That is hardly deniable, but where exactly lies the truth of what happened?

The Sri Lankan government has its own version of the facts

At the end of the screening, when the lights turned on again and we started recovering from the embarrassment of those terrible images so far away from the comfort of the UN venue where we were sitting, the ambassador of Sri Lanka rushed into the venue to read his intervention.

He decried the ‘distorted, dubious, cynical, concerted and orchestrated campaign’ aimed at casting a dark light over what his government officially call a ‘humanitarian rescue’ operation with ‘zero civilian casualties’. He added that any accusation of war crimes and crimes against humanity against the Singhalese Sri Lankan Government undermines the reconciliation process in the country. Is that true?

The UN Panel of Experts has another opinion

At the point, it was the turn of Yasmin Sooka, member of the Secretary General’s Panel of Experts on Accountability in Sri Lanka, to speak. She stated that the Sri Lankan Government cannot be trusted to investigate itself and reminded that the military court exonerated itself. This is why she called for an independent international investigation to ascertain the exact number of civilian victims and identify responsibilities.

The 2011 report Panel of Experts on Accountability in Sri Lanka mentioned credible allegations of violations of the International Humanitarian Law committed by both the government and LTTE, some of which amount for war crimes and crimes against humanity. It detailed large-scale shelling of civilians in No Fire Zones carried out by the Sri Lankan Government and the use of civilians as hostages and buffer by the LTTE. But the list of atrocities is not over: summary executions, rape, torture, internally displaced people kept in overcrowded closed camps, forced child recruitment, point-black shooting and the use of ‘white vans’ to make people disappear add to the suffering.

The day before the High Commissioner for Human Rights, Ms. Navi Pillay, during the Annual Report at Human Rights Council, had praised the 2012 report of the Internal Review Panel which concluded that there was a grave failure of the UN to adequately respond to the crisis during the last period of the civil war in Sri Lanka. 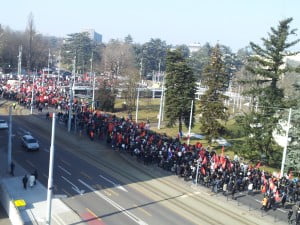 Ascertaining the responsibilities is not easy: the war was conducted in secret, as the Sri Lankan Government forced the UN and the international press to leave the war zone and silenced local media. But many share the idea that the world cannot keep looking away and that those responsible have to be prosecuted. The representative of Human Rights Watch in the venue urged the diplomats present there to respond as human beings.

At that point the venue was silent and somebody was maybe thinking about Macrae’s words: ‘without justice there can be no peace and reconciliation, and without truth there can be no justice.’ But truth discovery and justice are often a long process. Has the movie screening contributed to opening a breach into the investigation and prosecution of the responsible parties?

Only time can tell (hopefully soon).