Carrying the Torch toward Justice

Carrying the Torch toward Justice

Egyptians secured many gains in the revolution that began in January 2011, yet many suffered and many died. One Egyptian woman, Azza Hilal Suleiman, shared her traumatizing story with us at the MENA conference in June 2012 of what she suffered at the hands of Egyptian armed forces, and what she is doing now in her struggle for justice and accountability. 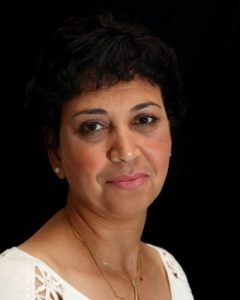 When we met Azza Hilal Suleiman in June 2012 at the WILPF Middle East North Africa (MENA) Conference in Geneva, Switzerland, we would not have imagined that this Egyptian woman, only seven months prior, had been lying on a hospital bed bruised and bloodied, fearing for her life. In the same sense, Suleiman would not have imagined that she would indeed survive, and then go on to share her testimony with women from all over the world. Her courageous story has been an inspiration to those working to achieve their aims of peace, justice and security for women in every society.

In December 2011, almost a year after the start of the Egyptian Revolution, and long after former President Hosni Mubarak stepped down, violence was still being waged in the streets of Cairo. A CNN segment shows a swarm of Egyptian soldiers beating and dragging a defenseless woman in the streets. It was at that moment that Azza Hilal Suleiman decided to intervene and was answered with a merciless beating of her own at the hands of Egypt’s armed forces.

NO LONGER A SOURCE OF PRIDE

The pride that many Egyptians once had in their armed forces has been undoubtedly shaken from instances like these that have continuously taken place since the uprising. Suleiman stated, “I grew up in an environment that respected the army: my father was a general. Two of my uncles were generals. Two of my brothers are also generals. We were raised up respecting the army and strongly believing in the nobility of our national army.”

In an interview with Suleiman’s brother, he says “Yes we come from a family of officers and yes, the army was once a source of pride for us. I am so thankful my father died before seeing my sister in this condition. It would have pained him a great deal having been a part of the organisation that attacked her.”

Despite blood clots and deep bruises that have not yet healed completely, Suleiman does not regret her decision to intervene on that December day in Tahrir Square.

“The day I helped this veiled girl I never thought of what they would do to me. All I thought was that another human being needed help. I ran to her and asked the officers ‘why this violence’?”

Shockingly enough, a few months following the attack, Suleiman’s fiancé was shot and killed by men she believes to be working in tandem with the armed forces. She is now committed to avenging his life through legal recourse.

SOLIDARITY AND HOPE FOR THE FUTURE

After the horrors that Suleiman and many other Egyptians experienced, one may expect them to feel defeated or helpless against such a powerful military force. Yet, Suleiman states, “When you go through hard times, solidarity is strongest. These attacks have proven to me the love between us, the strength we share…we must ensure we get our rights back, that we hold these people accountable.”

In the current Egyptian atmosphere, accessing civilian courts remains a challenge and many perpetrators have yet to be held accountable. Nevertheless, Egyptians like Suleiman will not give up and they will continue to struggle until they can welcome a day where their cries for justice will be answered, and the impunity of the military will come to an end.

The solidarity among women protestors is especially strong after coming together on the streets during the uprising and demanding that their voices be heard. They rallied not only against former President Hosni Mubarak, but also against any factors that have continuously kept them on the periphery of the political process in years past.

In the coming months, Egyptian women have much more to fight for to ensure an equal and inclusive society. They will struggle for increased access to education and economic opportunities, a place for women in government, unbiased media, laws against harassment and sexual violence, and the prevention of politicized religion that could potentially be used to justify their exclusion. Brave women like Azza Hilal Suleiman will not shy away from these challenges, especially when it comes to continuing the revolution and bringing her assailants to justice.

During her recovery, Suleiman would constantly voice her desire to get back to Tahrir Square. Her fiancé would tell her not to worry, that she had done what she could. He said, “Let others also carry your torch”. In memory of him and the many others who suffered the same fate, Egyptians will surely continue to carry the torch on the journey toward justice so that no life given in its pursuit will be in vain.

27 May 2011: “Second revolution” protests stem from frustration over the slow place of reforms

21 December 2011: Women march for their rights; some women beaten by soldiers

23 December 2011: Largest protest against the armed forces since the summer

9 July 2012: Parliament meets at the request of President Morsi despite earlier military ruling