CEDAW Discusses the Implementation of UNSCR 1325 in the United Kingdom

CEDAW Discusses the Implementation of UNSCR 1325 in the United Kingdom

During its 55th session, the Committee on the Elimination of all forms of Discrimination against Women (CEDAW) reviewed, amongst others, Bosnia and Herzegovina (BiH), the UK and the DRC. WILPF was actively involved in the review of the DRC and also monitored the review of BiH and the UK.

UNSCR 1325 was discussed during the three sessions. All three countries have a National Action Plan but some elements still need improvement. In the case of the UK, the participation of women in the post-conflict process in Northern Ireland and the application of UNSCR 1325 is a major concern. 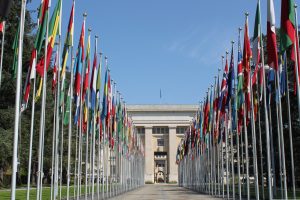 The United Nations Headquarters in Geneva where CEDAW holds its sessions.

Application of UNSCR 1325 in Northern Ireland

The Committee cited Resolution 1325 to point out the contrast between the UK’s foreign policy, which focuses heavily on sexual violence in conflict and post-conflict contexts and strongly promotes the implementation of SCR 1325, and its national policy concerning Northern Ireland.

The Troubles was a period of extreme violence and insecurity, resulting in the deaths of over 3,500 people and affecting the entire region. Irrespective of the particular legal status of this conflict, the representation and participation of women in its peace processes and in the decision-making bodies concerned with security and policies aimed to address the legacy of the conflict is undoubtedly a requirement of international law and is currently not being met.

The Committee rightly pointed out these internal and external policies are ‘incoherent’ and that while the UK’s efforts on 1325 abroad should be applauded, addressing Women, Peace and Security issues is not just important for ‘others’, but should be an integral part of each of our lives, everywhere across the world.

In its concluding observations, the Committee recommended that the UK ensure “the participation of women in the post-conflict process in Northern Ireland, in line with Security Council Resolution 1325” thus confirming the applicability of this Resolution to the case of Northern Ireland.

WHAT TO DO NOW?

You can read the concluding observations of the Committee on the UK here.

WILPF, and in particular WILPF UK, will continue to monitor the implementation of these and other CEDAW recommendations. The concluding observations are an essential advocacy tool to defend and protect human rights in these countries and in particular to implement UNSCR 1325. It will also be very important to refer back to these recommendations when the UK is reviewed by other human rights bodies.

We will keep you updated on further outcomes of this process; so stay in touch and don’t forget to follow us on Facebook and Twitter, and subscribe to our newsletter for the latest news.

As always, we’d love to know your thoughts on these issues.