CEDAW Settles the Link between the WPS Agenda, Disarmament and Women’s Rights

The Committee adopted its general recommendation 30

After more than two years in the making, the Committee on the Elimination of Discrimination Against Women (the Committee) has finally adopted its general recommendation on women in conflict prevention, conflict and post-conflict situations. This adoption represents an important step forward as it promotes an integrated approach to women’s rights that includes many elements from the women, peace and security agenda and from the disarmament agenda.

In this document, the Committee outlines the concrete measures States parties can take to ensure that women’s human rights are protected before, during and after a conflict. The general recommendation ensures that the Convention on the Elimination of Discrimination Against Women (the Convention) applies in all forms of conflict and post-conflicts settings. 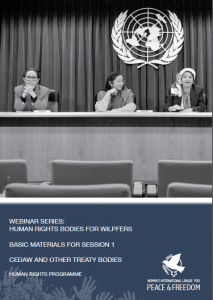 In the picture, members of CEDAW Committee as shown in the materials for the webinar on CEDAW by the Human Rights Programme.

WILPF participated to the drafting process

WILPF was involved in the entire drafting process, from the document’s inception to its adoption. The Committee used our expertise to strengthen language on disarmament, the Women, Peace and Security agenda and, especially, on the arms trade.

The Committee adopted many of our suggestions, however, our most important contribution has been the Committee’s inclusion of the Arms Trade Treaty (ATT) in this General Recommendation. At WILPF’s behest, the Committee specifically recommends all member States to sign, ratify and implement the ATT, underlining its importance for women’s rights.

The Arms Trade Treaty attempts to regulate the international transfer of arms. Thanks to WILPF’s advocacy, the treaty includes legally binding obligation for States parties not to authorize any export of arms if there is a risk the arms in question could be used to commit or facilitate serious acts of gender-based violence.

The integrated approach is featured in the general recommendation

WILPF’s integrated approach aims at bringing together issues of peace and security with women’s human rights. This approach is instrumental in addressing the root causes of conflict and violence and acknowledging that there are many factors related to security, arms flow, militarization and economic inequality that can impact  women’s rights as enshrined within the Convention.

It is worth noting that the United Nations Security Council (UNSC) adopted resolution 2122 on the same day that the Committee adopted its general recommendation. The resolution aims at removing barriers to women’s full participation in all efforts to prevent, resolve and rebuilt from conflict. The UNSC resolution makes strong references to human rights and features an integrated approach to peace, security and human rights. Another concrete illustration of the integrated approach is the participation of Navi Pillay, the High Commissioner for Human Rights, to the Women, Peace and Security debate of the Security Council. 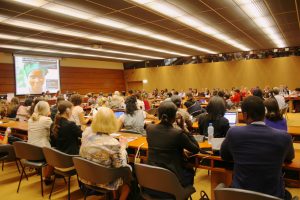 At the international level, WILPF International Secretariat fully engages with the work of the UN to promote women’s rights in conflict prevention, conflict and post-conflict situations. Here, a picture of a side organized by the Human Rights Programme to raise awareness on the role of women in the DRC.

The Convention and women in conflict prevention, conflict and post-conflict situations

The general recommendation provides authoritative guidance to States, and to some extent non-State actors, on how to implement obligations under the Convention. In other words, the Committee enlightens States and other stakeholders on how to use the CEDAW Convention to ensure and promote women’s rights in conflict prevention, conflict and post-conflict situations.

The Committee recommended many measures related to the Security Council agenda on women, peace and security, on women and conflict prevention, on disarmament (including references to the Arms Trade Treaty), on gender-based violence, on trafficking, on participation of women in the decision making process, on the security sector reform, demobilization and reintegration and on access to justice. One example is the inclusion of at a recommendation to address the gendered impact of international transfers of arms, especially small and illicit arms including through the ratification and implementation of the ATT. You can find many other recommendations in the document.

What to do next?

You can read the general recommendation No. 30 on women in conflict prevention, conflict and post-conflict situations.

This general recommendation is a great tool for advocacy, on both the national and the international level.

On a national level, WILPF sections and branches can use the general recommendation to push for their States to adopt adequate measures to promote women’s rights including the ratification and implementation of the ATT.

At the international level, WILPF and other organizations can now discuss issues related to security, arms flow, and the economic and social aspects of the women, peace and security agenda, with an even stronger legal basis thanks to this General Recommendation.

Now, we can more firmly demand that States guarantee the rights of all women by all necessary means, including reducing militarization and pursuing disarmament.