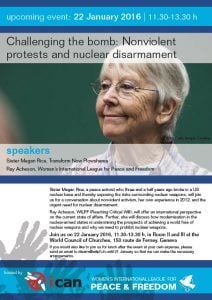 This January members of Transform Now Plowshares will be travelling and speaking in Europe to call attention to the nuclear arms race and to articulate the action they took in 2012 (breaking into a US nuclear facility) and why it remains important to continue such nonviolent resistance.

For their Geneva visit WILPF together with the International Campaign to Abolish Nuclear Weapons will hold a a debate on “Challenging the bomb: Nonviolent protests and nuclear disarmament” on Friday, 22 January 2016, 11.30-13.30 h, in Room II and III at the World Council of Churches, 150 route de Ferney, Geneva.

We will hear from Sister Megan Rice, a peace activist who three and a half years ago broke in a US nuclear base and thereby exposing the risks surrounding nuclear weapons, will join us for a conversation about nonviolent activism, her own experience in 2012, and the urgent need for nuclear disarmament.

Ray Acheson, Director of WILPF’s Disarmament programme ‘Reaching Critical Will’, will offer an international perspective on the current state of affairs. Further, she will discuss how modernisation in the nuclear-armed states is undermining the prospects of achieving a world free of nuclear weapons and why we need to prohibit nuclear weapons.

We hope to see you there!