Convening for “Feminist Movement for Change in Syria” Partners

Convening for “Feminist Movement for Change in Syria” Partners

WILPF organised a three-day face to face convening for partners of the “Feminist Movement for Change in Syria Project” with the aim of providing a safe space for the Syrian feminist organisations involved in the project to discuss cross-cutting and important issues.The face-to-face meeting was organised in response to partners’ requests to meet like-minded organisations for networking opportunities, sharing experiences and forming possible collaborations and partnerships.

The meeting was held between 1 and 3 October 2018 in Beirut, Lebanon, and 11 out of the 19 partners were able to physically attend. A video-conferencing option was set up to break the barrier of isolation and allow partners who are unable to travel, to join and participate in the discussions; 6 partners joined different sessions remotely over the period of the convening.

The convening allowed partners to share their thoughts organically, including flexible breaks to allow partners to network and get to know each other informally. Additionally, psychosocial support sessions were provided on all three days by Sabine Choucair, the co-founder of Clown Me in, in order to decrease the burn-out and allow for some breathers and fun activities in between focused conversations.

Rather than bringing external facilitation, the Feminist Movement for Change in Syria team thought it would be best to assign this task to the partners to guide the discussions among themselves on key thematic issues related to their areas of work. The four thematic sessions were held during the first two days of the convening and ranged from humanitarian relief and women’s economic empowerment, to gender equality, awareness raising, women’s active political participation, and peace-building.

The partners presented the work their organisations are undertaking in relation to the four themes, which broadened the conversation to other important issues, such as the role Syrian Civil Society Organisations (CSO) have played in defying stereotypes, awareness raising on gender equality and combating gender-based violence, how CSOs have challenged internationally imposed agendas to reflect the needs of women. Moreover, they discussed what peace-building means from a Syrian grassroots perspective, and what Syrian CSOs have done towards peace-building and the challenges they have faced. Partners also extensively addressed the issue of women’s political participation both at the local and international level, discussing the good practices required to achieve active participation and how the work being done can be supported and amplified. Dima Moussa, from the Syrian Women Political Movement, also attended the convening and brought valuable input from the movement’s experience and shared lessons learned and the tools available to civil society to impact the political process. 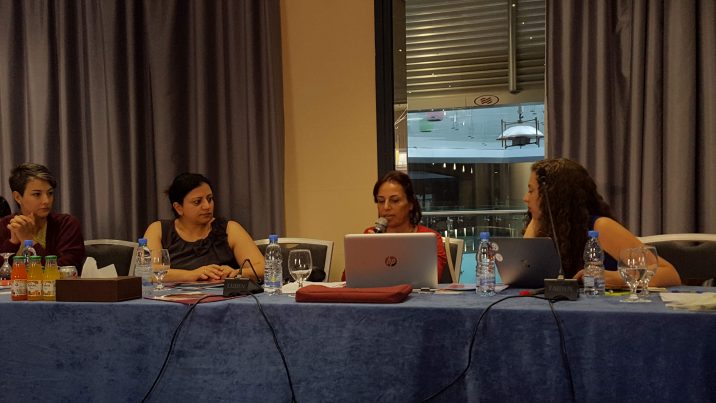 The importance of women’s presence and active participation on many levels was strongly vocalised by partners. Khawla Dunia, a member of the Syrian Women Network expressed the need for women’s active and meaningful role in politics, stating, “Women’s presence in the political sphere is insufficient, they need to be in decision-making positions. The question will remain on the women’s position at any table; women can be part of the local council, but whether they have meaningful participation is what matters.” Whereas Milia Eidmouni from Syrian Female Journalists Network (SFJN) added the importance of women’s presence on media outlets and on social media platforms. “It is important for women in the political sphere to appear on media, in order to present their opinions, additionally women should receive training on effectively using social media platforms.

On the third and last day, representatives of the Canadian, Norwegian and British embassies in Beirut, together with representatives from OHCHR were invited to the meeting with the aim of fostering communication between international organisations and grassroots CSOs, to provide opportunities for networking, sharing lessons learned, exchanging good practices and the challenges Syrian organisations are facing. A big struggle the majority of partners share is the issue of sustainability of funds, which is one of the aims that the “Feminist Movement for Change in Syria” project is contributing to. Manal Quider, Founder and Director of Damma, said, “When a project ends, there is a lack of funding, and a gap while applying for new funding, and we are in dire need for more sustainability. To respond to the priorities of the funding agencies, we are forced to work on different issues which sometimes are not necessarily our expertise, so this results in burnout of team and loss of work and effort. The struggle is we sometimes either have to shut down operation, change our policies or work within the “trend” to get grants.” Other challenges discussed were the many obstacles and limitations of legal registration for organisations working on Syria in neighbouring countries.

Anna Brown, MEL Consultant at WILPF, facilitated two sessions where partners discussed what empowerment and resilience meant to them. Flexibility and passion for what they do were feelings echoed across the room by the partners. Dr. Maria Al Abdeh, Director of Women Now for Development expressed, “We have all been flexible and resilient, and if it weren’t for that we would not be here today. Believing in what we do, and not just in the execution of projects, relying on mutual trust, and not just funds, has been crucial.”  She added that the partnerships the project built with organisations that do not work exclusively on women issues had a particular importance as it allowed them to explore, and be vocal about, their feminist agendas, and empowered women within the teams to take their ideas forward.

The last day also allowed the partners to share their honest and constructive feedback regarding the project design and implementation as well as the overall WILPF support.

The feedback on the technical support, communication and project design itself was also very positive. The partners truly appreciated the participatory approach that WILPF adopted during all the stages of the project. Doha Adi from Sawa for Development and Aid said, “The support that SAWA received from WILPF was different as it was built on SAWA’s needs; it was not ready and imposed on SAWA. This was very beneficial, as many times donors have pre-built conceptions and expectations that do not fit into the local context we are working on, or the needs which we know are required…. The partnership with WILPF had a different approach on the team itself; it was built on taking a step back, looking at the bigger picture, and how the work had been performed and how we view gender” 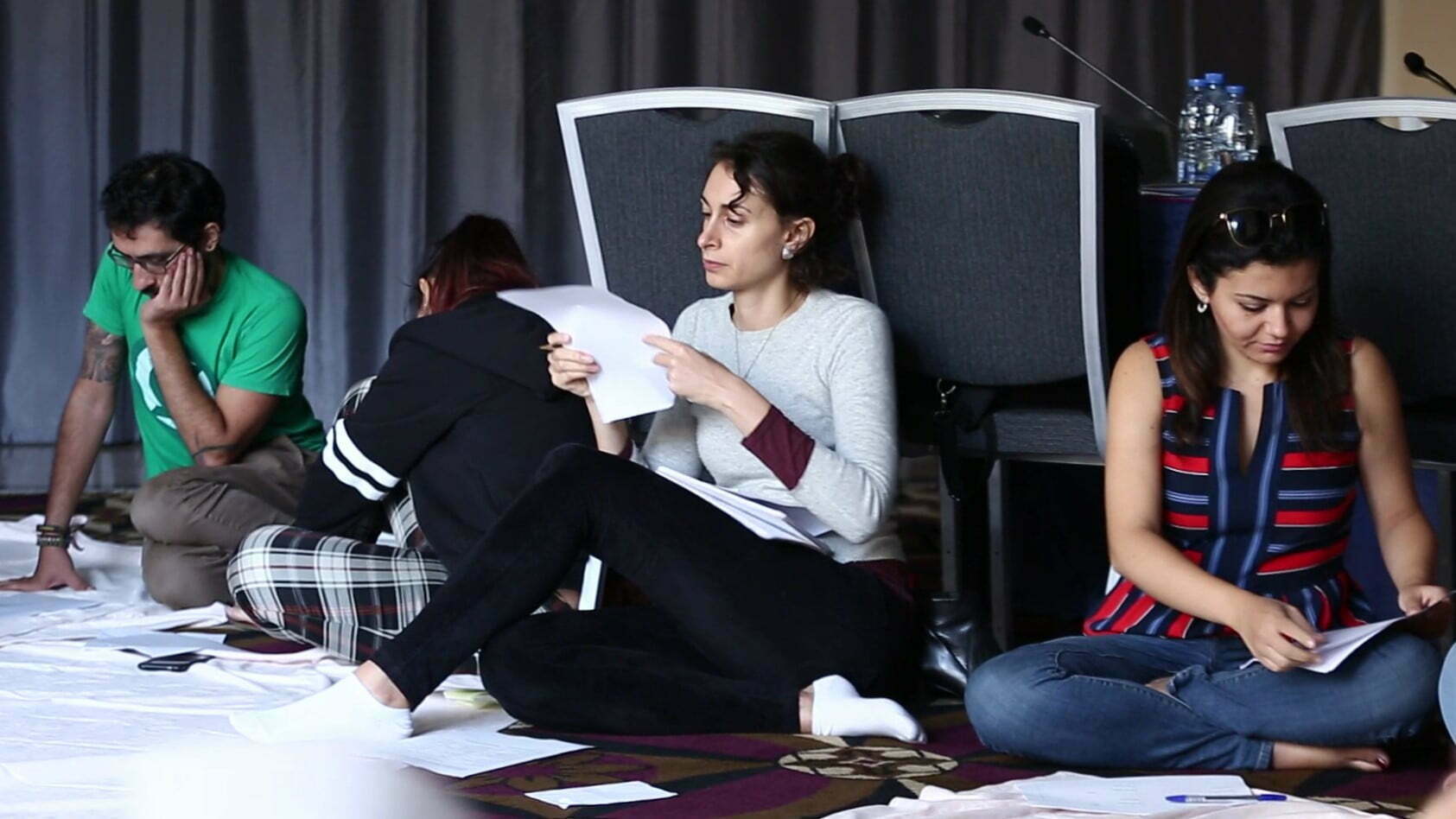 Women Now for Development provided feedback on the gender mainstreaming training, stating, “The member of our team who attended in person reported that the trainers were excellent, had an interesting approach and for the first time explained how feminism had been used and co-opted through colonialism and she will use this understanding in the training that she delivers on gender and women’s rights within our centres.”

A member of Al-Wafa organisation based in Idlib who attended the Psychosocial Support and media sessions online , because of travel restrictions, stated: “I found the Psychosocial Support training sessions truly beneficial and useful for us, and we would like additional training sessions in this area since they were very useful for us to be able to learn to cope with our reality. In regards to the media & communications, we also found the training very useful and interactive. It helped us learn how to formulate and create posts that are more sensitive to our target audience”

Alternatively, while the project responded to their individual organisational needs, partners noted that the project was short in general and there is uncertainty about sustainability.  WILPF will carry on fundraising to continue this flexible pilot project, taking into consideration all feedback received throughout the project to enhance and improve future projects.

By Charlotte Hooij|2019-07-17T11:49:14+02:0013 November 2018|Build the Movement, Leverage Feminist Perspectives on Peace|Comments Off on Convening for “Feminist Movement for Change in Syria” Partners