Cynthia Enloe, feminist writer and scholar of women and militarized cultures, participated in the recent Geneva Peace Summit, which brought together women from different war torn countries including Syria, to share their lessons, experiences, and frustrations with their often limited role as peacemakers. Dr. Enloe is also a member of WILPF Academic Network.

Below is Dr. Enloe’s entry for Day 1, the Peace Summit. Download her full writings on all the days here.

Day I of the Syrian Women’s Peace Talks in Geneva: Prelude to the Official Syrian Peace Talks.

If you haven’t been to Geneva, it’s a beautiful city straddling the far end of the very large Lake Geneva. Alpine hikers only have to take a tram to start a day of mountain walking. On one side of the bridge is the old city – think Calvin – now small shops, cafes, museums. On the opposite side of the lake, where I am, are modern apartments, the big train station, halal butcher shops, and acres of glass high rise international agency offices: the UN refugee agency, the UN labor organization, the UN human rights council, as well as the offices of Doctors Without Borders, the International Committee of Red Cross, among dozens more. 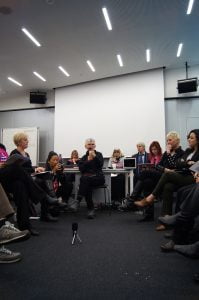 The major transnational feminist organization with its headquarters here in Geneva is “WILPF,” the Women’s International League for Peace and Freedom. Founded in 1915, in protest against the waging of World War I, WILPF is headed now by Madeleine Rees, one of the really smart feminist strategists who has been pushing for women’s rights to be taken seriously in UN peacekeeping operations and in the crucial post-conflict transitional political arrangements. WILPF is one of the organizers of this gathering.

Also here taking part in these alternative Syrian peace talks are two Nobel laureates – from Northern Ireland (Mairead Maguire) and Iran (Shirin Ebadi). Shirin explained at lunch today that she’s been forced to leave Iran now that the government has forcibly closed down her law firm because of its work for human rights advocates. With other Nobel women laureates, Shirin has created a Nobel Women’s Initiative working internationally for peace.

We all gathered at the Graduate Institute, wonderful new glass buildings just a short walk from the UN. Lisa Prugl, a well known feminist International Relations scholar and a faculty member at the Institute, had arranged for the space. The politics of space is always interesting. We all sat in a big circle – we are feminists after all! The focus was and is: How to persuade the UN officials and the US and Russian officials – as well as all the Syrian men invited to the official peace talks table (which officially begin in two days) – that inviting the only men who wield guns (and the men with brief cases who have large armies behind them) to make peace is not a formula that will work. In fact, there’s an international track record – evidence! – to prove that this “only men with guns can make peace” is not an effective formula.

Instead, the women who have come together here, as diverse as /we they certainly are (in experiences, ages, nationalities, occupations),  agree: the only productive formula for moving towards a sustainable (“sustainable” was used repeatedly – these are not “quick fix” sorts of thinkers) peace is to have at the official table (not mere “observers”) representatives of those women civil society activists inside Syria. That is, sitting at the official negotiating table should be Syrian women who have knowledge about creating peace, reducing violence, creating a genuine social contract, AND who are not coming to the official table to promote post-war political careers for themselves.

In public, the government and international agency officials have learned over the last decade how to say the polite, diplomatic things about caring about women in war zones. But, in practice, they go on taking seriously only men with guns. 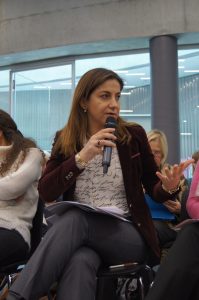 Rim Turkmani speaking at the third panel of the Geneva Peace Summit 2014.

One Syrian woman active with civil society groups working inside Syria under terrible conditions told us a story ( “civil society ” is the term used by all the women gathered here to mean: NOT militias, NOT political parties, NOT groups representing any regime; to create a civil society is to create a society of genuine citizens, not subjects).

This woman’s  name is Rim Turkmani. Rim is an astrophysics professor and local community organizer (Rim could give her name, unlike many of the Syrian women activists here, who cannot give their names or be photographed – it’s too dangerous). Rim explained  to us that she comes from Homs, the Syrian city where the non-violent movement calling on the Assad regime to open up politics for a more transparent, democratic process began in early 2011.

She said that no one in Homs ever used to identify anyone else or any neighborhood or village by its sectarian majority. That is, no one she knew in Homs called village X “Shiite” or suburb Y “Sunni.” Rim: “I had a roommate and I didn’t even know whether she was Shiite or Sunni. Who cared?”

But now, in year 4 of the violent conflict, Homs residents are being urged to think in these divisive sectarian terms. Rim blames this divisive new trend in part on outsiders, for instance, the Saudi, Qatari and Iran governments, each of which is pouring in money for their respective proxy fighters and political organizations, each of which wants to think of the Syrian war in those sectarian terms for the sake of their own regional ambitions. 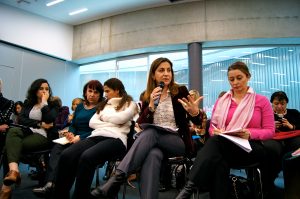 When US and other officials also start seeing any Syrian with an idea as “representing” one sect or another, then that plays right into this destructive dynamic —It also, Rim told us, reinforces Assad’s claim that only his regime represents “all Syrians,” even though he has been playing the ethnicity and sectarian “cards” for years.

Listening to Rim’s story, I was reminded of Iraqi feminists during the years of the US occupation saying that the more the US officials insisted on seeing Iraq’s troubles in sectarian and ethnic (Sunni vs Shiite vs, Kurds) terms, the more Iraqis themselves, many of whom had married, had had friendships and neighborly relations without employing such narrow identity boxes, began to think of themselves and their fellow citizens in these divisive terms!

Oh, and all of this is after just Day 1!  My wee head is bursting….