Colombia is considered the most violent country in South America. Violence against women is a phenomenon that is historically tied to the country’s culture and the construction of its identity. This acts to normalise violence and seriously affect the rights of women.

The use of weapons is considered a typically masculine trait, which bestows status and respect. In light of this, the Instituto de Estudios Comparados en Ciencias Penales y Sociales (Institute of Comparative Studies in Criminal and Social Science) has revealed that domestic violence is the only area in which the death of women exceeds that of men, a situation that is directly related to the use of small arms, given that they increase the likelihood of a partner dying, by 12 times.

Colombian masculinity associates security with weapons. Bearing in mind the processes of reintegration and security in poorer areas and the fact that an individual’s history of violence isn’t taken into account when obtaining a weapon legally, it is very easy to get hold of one. 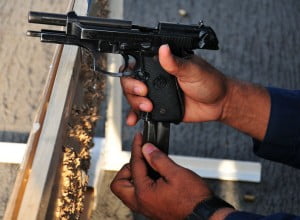 The 2011 legal medicine report revealed that people who work at home were the most common victims, with the majority of domestic violence incidents against women committed at night and during the weekend.

These were aggravated by alcohol consumption or drug use, and were not only committed by family members but also by ex-boyfriends and ex-husbands. In 2011, women represented 78.1% of the victims of domestic violence, particularly in sexual and partner abuse cases, where they represented 88.4%.

Injuries to women caused by small weapons in the home are constantly made invisible by conflict, the belief that men only use weapons against other men, the lack of institutional surveillance and the restricted access to justice.

In addition to employing legal action against the trading and legalised marketing of arms on a national and international level, we must educate and raise awareness to dispel cultural stereotypes.

The laws are important but they require action to be taken which will guarantee that they will be complied with, and which will effectively prevent violence against women.

Similarly, if the peace process is successful, it will be necessary to create effective disarmament programmes integrating veterans into civil life, in order to avoid the weapons that are used in the jungles appearing in our homes and streets.

We need and demand demilitarisation, we don’t want any more violence, and we don’t want to live in a country at war, which legitimises violence against women.

Ricardo José Leal Acosta is a human rights lawyer and graduate from the University of Cartagena, Ricardo Acosta is responsible for the communications strategy in Bolivar and has worked with WILPF Colombia (LIMPAL) as a research and development volunteer and consultant for basic associations. He has always been interested in the defence of human rights, particularly those of women and those in situations of displacement.