Day 11: Governments Must Take a Stand against Small Arms

Day 11: Governments Must Take a Stand against Small Arms

Small arms are the common tools of violence today; they are cheap, light, and very easy to carry.

The possession of small arms alone may not create the conflicts in which they are used, but when they are gathered over time the fear of insecurity grows higher within the community and this can lead to long-term violence.

The majority of injuries and deaths are caused by the use of these small arms during conflict, and mass populations suffer the most. 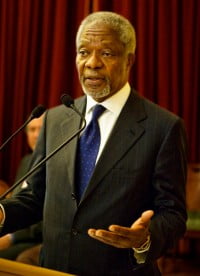 In 2000, the then U.N. Secretary-General Kofi Annan called small arms “the real weapons of mass destruction.” This is in stark contrast to the proliferation of chemical and biological weapons, which have spurred a global movement to regulate and control their use and spread.

Small arms are used to cause domestic, political, community and peer group violence and violate human rights. They are used to kill, maim, rape and inflict other forms of sexual violence, torture, as well as the forced recruitment of children by armed groups.

More human rights abuses are committed with small arms than with any other weapon. This leads to poverty, a decline in access to social services, as well as channels energy and resources away from efforts to improve human development and society.

There are no accurate figures for the number of small arms and light weapons currently in circulation globally. Sources estimate the total to be at least 875 million.

Governments have a responsibility to protect the public and their interest should be in providing security and development, which will lead to a peaceful and progressive society.

But this is hindered by the indiscriminate distribution, possession and usage of small arms. Small arms violence indiscriminately affects countries in the midst of both conflict and peace, across ethnicities, tribes and religions, among both the poor and privileged, from north to south, across east and west.

The Ecumenical Network on Small Arms (ENSA), a faith-based organization, is just one example of the many organisations that try to put an end to the small arm violence, which affects society at large. They provide material, moral, ethical and spiritual contribution. They help to inform and mobilize people to the international disarmament campaign.

The disarmament, demobilization, and reintegration (DDR) of ex-combatants is, in fact, a very important factor in broader peace-building efforts. To stop small arms proliferation and violence one must ensure the removal of these weapons from society.

Jennifer Okechukwu graduated from Ahmadu Bello University Zaria, Kaduna State Nigeria, with a diploma in physics education and a BSC in computer science.

Currently she is interning at WILPF Nigeria, doubling as the national programme coordinator and the international board alternate.