Day 5: The Recurring Nightmare of War in Gaza

Day 5: The Recurring Nightmare of War in Gaza

As we mark this year’s 16 Days of Activism, I affirm from experience that militarised violence does devastate any chance of peace in the home. The strong link between ending violence against women and ending wars was restated for me, as I watched the latest Israeli military Operation “Pillar of Defence” in the last two weeks.

I was immediately drawn back into the trauma of military Operation “Cast Lead” (OCL) which began on the morning of Saturday 27 December 2008, when Israel broke the ceasefire agreement with Hamas, as Gaza children made their way to school. As Israel’s longest and deadliest incursion into the blockaded Gaza Strip, “Cast Lead” preceded 2012’s “Pillar” in a long line of strategic military efforts to render the daily life of Palestinians “unbearable”. 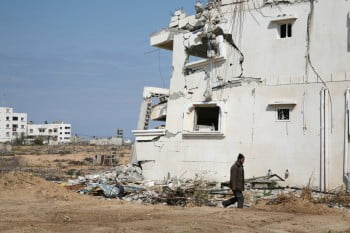 As OCL began, I was at home with my family in a flat overlooking a heavily-guarded pedestrian crossing through the infamous – and illegal – barricade that separates Palestinians in the West Bank from those in East Jerusalem. By Sunday evening, the violence reached us too: we awoke to the sound of M16 rifle fire as Israeli Defence Force (IDF) soldiers fired seemingly endless rounds of bullets at Palestinians on the other side of the barricade who were protesting the Gaza attack. Inside Gaza, more than a thousand civilians were going to die in the next 22 days.

As those days dragged endlessly on, I was glued to the internet, frantically phoning friends inside Gaza for news, gripped with fear that people I loved might not make it. When Israeli troops finally withdrew, an event that was carefully timed to coincide with President Obama’s first oath of office, it was finally possible for me to go into the Strip to see for myself what had happened.

Nothing could have prepared me for the devastation of Gaza after relentless bombardment, shelling, incursions by tanks and well-armed combat troops. The place was flattened, the ruins still smouldering. Mature orange and olive trees, a major source of livelihood and nutrition, had been ruthlessly uprooted; roads were shredded by tanks; and the Strip’s sole industrial zone had been systematically destroyed. Around USD 527 million of damage had been caused.

“To exist is to resist”, say Palestinians, and that was evident everywhere in the aftermath. Male friends told me of their admiration for women’s courage – risking their lives, they had usually been the ones to go out to find food and water in the thick of the fighting since it was known that the IDF, having labelled every male in Gaza a “terrorist”, would shoot to kill any man on sight.

Women spoke little about how they had felt in that time they were outside: they were just doing what Gaza women have done since al nakba: making their families’ lives liveable. They did talk of the courage and kindness they had seen in men. One told me how a passer-by had tried to help her family get their disabled uncle to safety during fierce shelling. He had stood and cried with them as, helpless to move the old man, they had had to leave him to die in the flames that engulfed their home. 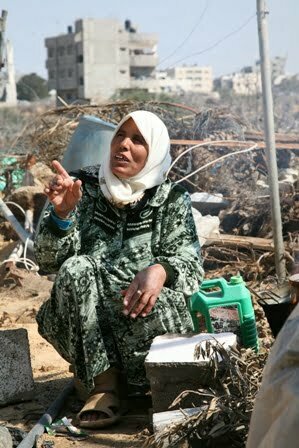 One mind-numbingly brutal aspect of the attack was that the kitchens of Gaza homes had been particularly, it seemed systematically, targeted. House after house had had a single corner – the downstairs kitchen corner – carefully bulldozed through by tanks. It was only when I saw women hunched over cooking fires in the open air that I realised just how cruel it is to destroy a family’s kitchen.

The heart of Palestinian homes, the place of familial sustenance, nurturance and tradition, had been deliberately torn out. Now, all that offered newly homeless people some modicum of comfort was a primitive fire. “They want to make us feel like savages,” said Fatma, as she struggled to cook on smouldering twigs.

It wasn’t until the months and years after OCL ended, though, that I realised how damaged Gazan families had been. Survivors began to speak of what it felt like to live on when everyone you love has died, including Dr. Izzeldin Abuelaisha, a gynaecologist well-known to his Israeli patients, whose three daughters were blown up by a shell.

Then relief at still being alive slowly turned back to fear and exhaustion as the blockade remained in place and the ceasefire trembled on a knife edge. The humiliation of not being able to protect their families meant that some men started using violence at home.

The violence extended well beyond Gaza, of course. After the incursion ended I listened, appalled, as the shrill rhetoric denying the Palestinian right to resistance and self-defence in the face of Israel’s settler colonial policies grew louder. It grew even louder as the full extent of the damage done to Gaza’s trapped and helpless civilian population was revealed.

The violence of OCL never really stopped, although its scale was dramatically lessened between January 28th and 14th November 2012 . In this latest escalation, all my memories of the horrors of OCL came flooding back as the IDF attacked Gaza from the air and sea while Hamas retaliated with weaponry effective enough to reach Al Quds, Jerusalem, where I have dozens of friends. Again, I was frantically Skyping with those inside the blockade – were they all ok? For a second time, I read the heart-breaking testimonies of mothers crazed with fear for their children and husbands. Once more I listened as Western leaders justified the cruelty and scale of Israel’s offensive in what journalist Amira Hass describes as “a tremendous propaganda victory” for Israel.

Yet again, I thought about how the cold nights and lack of food and water were adding to Gazan’s torment. As I saw the sad parade of crumpled small bodies being carried by weeping adults, I could hear children crying in fear on both sides of the border as they wet their beds in the thundering mortar fire, learning anew that nothing can be done to protect them from the terror of Israel’s military might or Hamas’s indiscriminately fired rockets.

Each time Israel attacks blockaded Gaza, each time Hamas and armed groups escalate the violence by shooting rockets back, each time either side claims that it has upstaged the other, a little more of the fragile fabric of Gaza’s life is shredded.

This 16 Days, as we stand once more in solidarity with stateless, homeless, refugee, blockaded Palestinians, let us neither forgive this war against the helpless, nor do anything more to support the angry men that wage it.

For in the end, this latest undermining of the efforts of Mahmoud Abbas to work through non-violent diplomacy for the recognition of a Palestinian State is not a show of superiority. It is only another attestation that patriarchal militarisation will never cease its violence until all other voices are silenced.