Millions of people, in particular women, are affected daily by direct and indirect consequences of use, production, stockpiling and sales of weapons. These consequences come from all types of weapons, from nuclear weapons and other WMDs, to conventional weapons and explosive remnants of war, and most significantly, small arms and light weapons. The Arms trade is big business and weapons flow in and out of countries uncontrollably. The impact of the widespread proliferation and misuse of arms heavily affects women and needs to be urgently addressed. 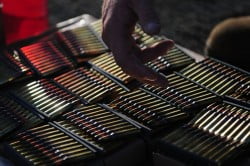 The arms trade affects everyone – men, women, boys and girls – in different ways. For women, the ongoing unregulated arms trade has devastating effects.

For example, sexual violence is often employed widely and systematically against civilians during armed conflict. The links to the proliferation and trade in arms is rarely discussed, but evidence from conflict zones such as Cote d’Ivoire and the Democratic People’s Republic of Congo shows that gender-based violence against women, perpetrated by diverse actors including state security forces and armed opposition groups, has been greatly intensified by the proliferation of small arms imports into the country.

Weapons are also used daily to facilitate repression of women and state violence, and women are disproportionately affected by high levels of firearms-related homicides and domestic violence.

The ongoing arms trade is a deadly and corrupt business. It fuels conflict, allows for human rights abuse and assists in supporting non-democratic regimes while urgent development needs lack significant resources. Somehow, the international community has never agreed on any international rules on how to regulate arms trade, in order to prevent misuse, violations of human rights and international humanitarian law, and gender-based violence.

Every government in the world has a responsibility to reduce arms trade – both through limiting the possession within its borders, to protect its own citizens from their use, and for assuring that any export of weapons are not used to violate international human rights and humanitarian law.

In July 2012 at the United Nations in New York, all the governments in the world got together to negotiate such a treaty, but failed to reach consensus on the final document. Governments will get a new chance in March 2013, when a final negotiating conference will be held, with the aim to adopt such treaty.

To be consistent with the broader UN practice of mainstreaming gender by paying attention to differing impacts on women and men in all frameworks, policies and programmes, an Arms Trade Treaty (ATT) must recognise the specific impact of irresponsible international arms transfers on women and their rights.

An ATT must require states to not allow an international transfer of conventional arms where there is a substantial risk that the arms under consideration are likely to be used to perpetrate or facilitate acts of gender-based violence, including rape and other forms of sexual violence.

Including gender-based violence in the criteria of an ATT would acknowledge that both exporting and importing countries would have a joint, though different, responsibility to prevent these crimes.

While all gender-based violence is unlawful and the primary legal responsibility of the importing State to address, it is when transfers of conventional arms are made where there is a substantial risk of violations, that the special machinery of the ATT should be engaged: that is, where a proposed end user of an export, import or international transfer of conventional arms is under consideration for engaging in harmful activity, or for failing in their duty to prevent persistent or pervasive violations resulting in gender-based violence through the use of arms.

WILPF International calls on all its members to advocate for an Arms Trade Treaty with a strong reference to the prevention of gender-based violence and which will commit states to not allowing the transfer of arms where there is a substantial risk that such weapons are likely to be used to perpetrate or facilitate acts of gender-based violence, including rape and other forms of sexual violence.

See Reaching Critical Will’s website for more information on the Arms Trade Treaty and how to engage in this issue.