“Every bit of dignity we had was shattered”

“Every bit of dignity we had was shattered”: WILPF’s Jamila Afghani and Hareer Hashim share concerns and demands after evacuating from Afghanistan

As the Taliban takeover of Afghanistan escalated in early August, WILPF Afghanistan’s president – celebrated human rights activist Jamila Afghani – and the Section’s programme manager, Hareer Hashim, knew they had to find a way to evacuate.

Across the country, women human rights defenders and other human rights activists were increasingly being targeted by the Taliban – their values of peace, freedom, and democracy an affront to a group that has historically oppressed women and denied their rights to education and free speech.

Together with their families – including Jamila’s three young children – the two women attempted to access Kabul’s Hamid Karzai International Airport for a week before they were finally able to cross the checkpoints. Aided by WILPF, other humanitarian organisations, and personal contacts, the group of 11 people were safely evacuated to Norway on 25 August.

From the hotel where they are currently in quarantine, Jamila and Hareer spoke with WILPF’s International Secretariat about their harrowing experiences, the behaviour they witnessed from US soldiers, and the failures of the international community to protect the rights and dignity of the Afghan people during the current crisis.

WILPF: What was it like trying to get through the checkpoints at the airport?

Hareer: On our first attempt to evacuate, we reached the Taliban checkpoints and found they were actually quite cooperative with us. At the checkpoints managed by the US military, we faced the most degrading, dangerous, and dehumanising behaviour. We thought the US soldiers valued human rights and democracy, but at that checkpoint we faced utter chaos.

Jamila has a disability and I was trying to protect her and her daughter, who’s young and was suffocating in the middle of the crowd because she’s so tiny. We had to hold her up and she got injured in the process. I fell and was stomped on. We were holding up Jamila’s crutches in the air, waving and screaming. The soldiers didn’t care.

I saw that in our own homeland, within the hierarchy we were at the lowest level. It didn’t matter if you were a human rights activist, if you were a person with disabilities, if you had kids. It was everyone for themselves. The people who were supposed to help did not care.

Jamila: People were not being prioritised. We heard repeatedly that criminals were being let in, while women human rights activists and others were being left behind. It was mismanaged. It was chaos. They should have had proper mechanisms in place for evacuating people in a more organised way.

WILPF: How did you finally manage to get into the airport?

Jamila: I had visas for 11 countries to get out, but every time we tried to get into the airport our attempts would fail. For about a week, we would go to the airport and wait for many hours to reach the different checkpoints. But the telephones near the gates did not work, the internet wasn’t working – all communications were down – so we were not able to communicate with our contacts inside the airport to tell them we were at the gate and someone should come and support us.

Each day, we would have to return to a different location rather than going home, and come back to the airport the next day to try again. We tried almost every possible way to get in. But they weren’t basing entry on who deserved or needed to get through.

Hareer: Through friends and family, we were able to secure a code word that was recognised by the Norwegian military, and that’s how we were able to cross. But when we crossed, we had to jump into sewage.

The military personnel were not even allowed to help us cross the bridge. We were so worried about how Jamila was going to cross because of her disability; she wears a prosthesis. We didn’t know how it would work. Luckily, my father put her on his back and carried her, but she could have fallen down and gotten severely injured.

We literally jumped into sewage, which was filled with [human excrement] and we don’t even know what else. They stripped us of everything we had. Our identity. Our dignity. The last memory we have of Afghanistan is so scathed by this memory. It’s a memory that still gives us nightmares. It was so dehumanising. Every bit of dignity we had was shattered.

Jamila: We have to find a more human, dignified way to evacuate people, to evacuate women and women human rights defenders. And in a safe way. We cannot allow others to go through what we went through. There must be a proper strategy. At the moment, the Kabul airport is out of the question – it’s extremely dangerous. We should find some alternative routes to cross people into neighbouring countries. 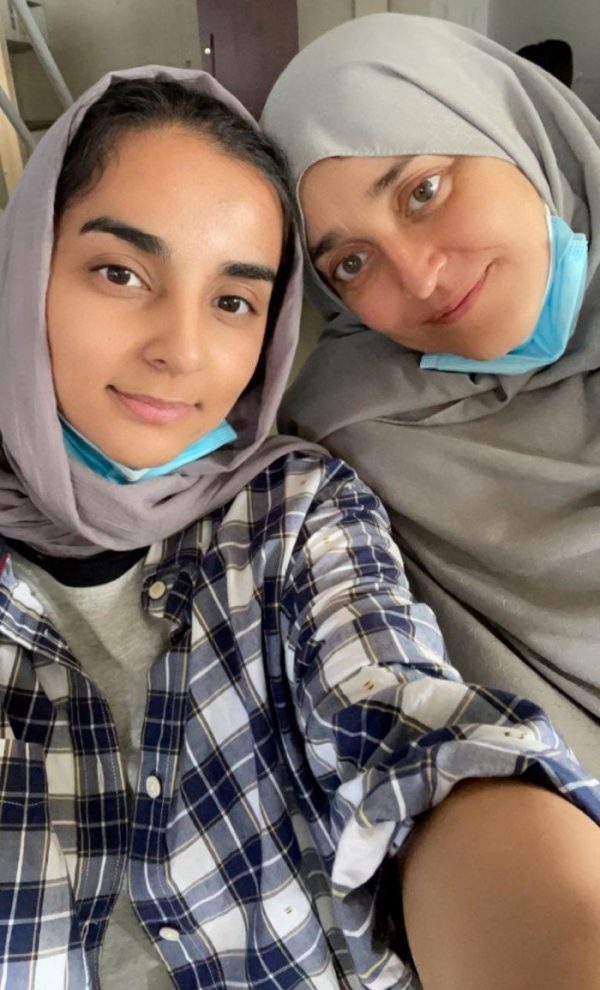 WILPF: What actions should the international community be taking right now to help Afghanistan?

Jamila: The elected government just left us in a single day without any bit of restriction on the Taliban. They created a vacuum of power in the country. I will personally never forgive them for this huge mistake, this unacceptable action. They have created a vacuum of power and now the Taliban are on the ground. Now the Taliban are in charge. They have come as a victorious group. But 36 million people are living in Afghanistan, in need of food, in need of the basic necessities of life.

I think the international community should accept this reality.

This is not an ideal scenario. This is the least we can do at the moment.

WILPF: Can you tell us about life in Afghanistan prior to this crisis?

Hareer: I felt the most alive in my motherland. I felt accepted, I felt like I belonged somewhere. There was a sense of empowerment because you’re doing something for the people of your nation, and you feel like you’re giving back to your community. You feel good and happy and so excited about everything good that’s happened, all the progress that’s been made in the past 20 years.

Kabul has a reviving vibe to it. The weather rejuvenates your soul. The people are so hospitable. They are full of hope. Despite everything we’ve been through, despite all the obstacles. We’ve been through a lot – 40 plus years of war – and we have every reason to give up but our people have never given up. Our people have never surrendered. Our people continue to struggle and look forward to life. They have the biggest smiles on their faces. It’s so inspiring.

And I feel so relieved to be Afghan. I know for a lot of people it could be a curse but for me it’s been a blessing.

That’s why it also breaks your heart when you have to leave it behind.

Listen to Hareer speak about her life in Afghanistan prior to the current crisis.

Visit wilpf.org to learn more about how you can get involved with WILPF’s efforts to advance peace and justice in Afghanistan and around the world.