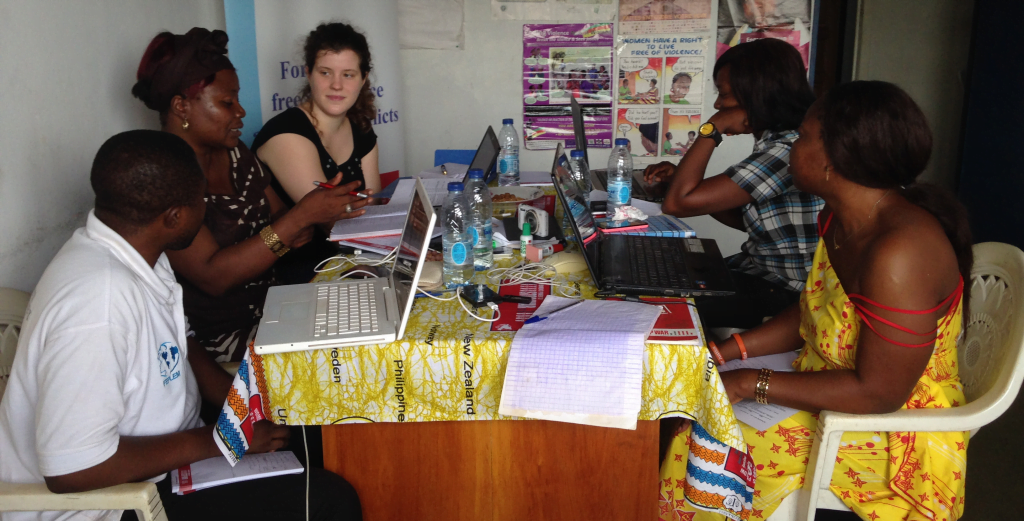 As part of the project on the implementation of the Arms Trade Treaty and the UN Programme of Action on Small Arms and Light Weapons, coordinated by WILPF’s Disarmament Programme, Reaching Critical Will, Mia Gandenberger paid a visit to WILPF Cameroon in Douala from 5-10 February.

For the project, WILPF’s Disarmament Programme has teamed up with four Sections, Cameroon, Colombia, Spain, and Sweden, to advocate for a better implementation of the Arms Trade Treaty (ATT) and the UN Programme of Action on Small Arms and Light Weapons (UNPoA), in particular with regard to the gender provisions in the ATT.

Each Section has developed their own way to go about it.

Making the ATT local in Cameroon

From discussions with WILPF Cameroon during the visit, it became clear that WILPF’s approach to advocate for peace through non-violent means is more pertinent then ever in Cameroon. Especially in times when Boko Haram attacks in the North of Cameroon are beginning to dominate the news and arms proliferation is high.

As part of the joint project, WILPF Cameroon is reaching out to the general public through (social) media, and researching Cameroon’s arms trade to identify the remaining challenges.

They have organised visits to ministries and officials and in fall 2015 they hosted a capacity building workshop on the ATT and UNPoA for authorities and civil society partners.

Making use of our time together

The WILPF Cameroon coordinator of the ATT project, Guy Blaise Dongmo Feugap, thought the visit from the International Secretariat was very important for the project, “because we were able to engage new actors from the administration, civil society and the media.” 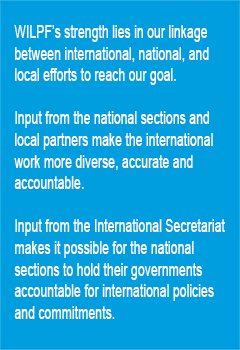 During the visit the entire WILPF team did not spend one idle minute.

The team went to see elected and appointed officials, civil society partners and coalitions, and held a well attented press conference to inform journalists about the ATT, WILPF’s work on the local and international level around it, and the addressing small arms proliferation in Cameroon.

Guy Blaise Dongmo Feugap noted “that when the International Secretariat goes to Sections, this creates a new dynamism and calls on members to take on greater challenges, since it is at the local level that the vision of a world free of violence and armed conflict has its value.”

But this goes both ways!

While WILPF Cameroon will continue its work on the local level, the upcoming meetings on the UNPoA and the ATT will provide opportunities for the International Secretariat to highlight the challenges our local Section in Cameroon is facing on the ground.

It was the first visit from a representative of the International Secretariat to a Section in 2016 and with hopefully many to follow, WILPF is in for a energizing and collaborative 2016.

This unique connection beyond borders and levels of engagement is what makes WILPF special and will hopefully soon bring about the peace and freedom we are all working for together.

If you want to see more pictures from the visit have a look at WILPF Cameroon’s Facebook page.