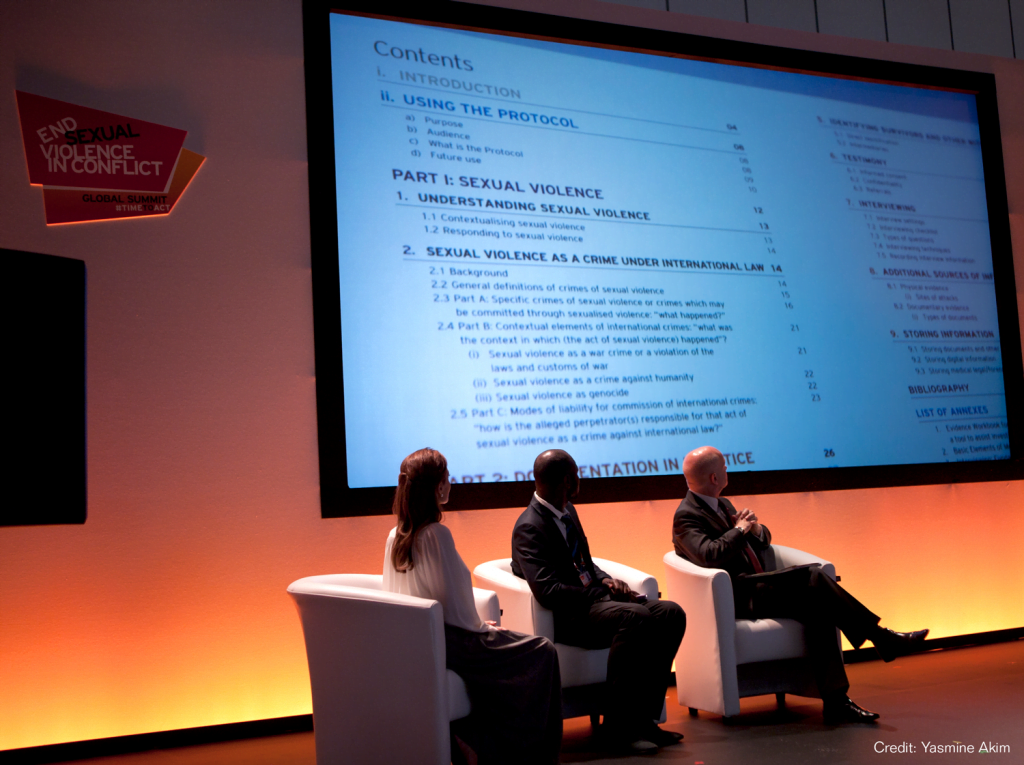 I sat in the glittery closing plenary of the Global Summit in London last week (June 10-13) , tired, saddened and outraged. I listened together with activists, governments and survivors, to the hallow words of the UK Foreign Secretary William Hague. He played to the crowd pleaser of participation, catching the interest of those who dedicated their lives to Women, Peace and Security, completely aware of the audience he would generate.

I sit listening and knowing that his promises have not translated to “practical action” (another sound-bite of the Summit hosts). I wondered as I heard the Foreign Secretary saying how saddened he was that women and women’s groups still have to ask to be included at the negotiating table. Continuing,“We should not have to be reminded, as governments, that women must have a seat in every forum of decision-making, and it should not be the uphill struggle that it is to overturn the habits of centuries and establish new precedents and norms for full female participation.”

I want to be optimist (because I am an optimist by nature) but I know what the reality is at this moment in Nigeria for example. Despite the using the right buzz words at the star studded Summit, combined with the immense mobilisation around #BringBackOurGirls, outrageously Nigerian women’s civil society and their voices were excluded from the Nigeria security meeting, held on June 12th in the margins of the Global Summit.

These Security meetings (May 17th in Paris and June 12th in London) with leaders from Benin, Cameroon, Chad, France, Niger and Nigeria, as well as representatives of the European Union, the United Kingdom and the United States aim to create a regional strategy to counter Boko Haram. We have called for these discussions to address root causes and include women’s participation, however neither of these important meetings have included women civil society- no women from Nigeria, and no representatives of the abducted girls.

Security Council Resolution 1325 at its core affirmed women’s participation in decision-making on peace and security and yet it is outrageous that its implementation is still failing. 1325 is failing the women of Nigeria.  It is vital women’s voices and gender perspectives are included now, not later. As Joy Onyesoh, the President of WILPF Nigeria said to me this week: “we –Nigeria women- have more on the ground experience, we live these realities, to us these are the issues we breathe, the fears we experience everyday. I expect women’s organisations from Nigeria and other countries involved be included from the onset of the regional security talks”.

WILPF and its partners worked tirelessly trying to shift the rhetoric to implementation in the weeks prior to June 12th meeting. Nigeria women met in Abuja, discussed, organised and drafted their messages to make the so-called commitments on Women Peace and Security work for them, for Nigerian women and sustainable peace in their communities.

We had just been through one of those “uphill struggles”, referred to by Hague, against his own UK Government. We reminded them again and again that they should include women and how best to do so. They agreed of course, but did they include women civil society? No. It wasn’t “appropriate”. Did they even keep their conciliation promise of distributing the Open Letter? No. As a total insult to our work and efforts, the UK did not even share, as promised, the specially drafted Open Letter from Nigeria women’s groups.

Today, the Chibok girls have still not been found or released despite Nigerian civil society and global efforts. How outrageous is it­ that speeches and celebrities are prioritised over substance, over reality, over implementation of already agreed upon commitments, over real meaningful participation! I am saddened because again the voices of women’s rights advocates are excluded, are disregarded, are forgotten. It makes our word in the women’s peace community more important than ever before.