We got the scoop on her thoughts and ideas for the future.

But first, a little bit about the presentation and election of Executive Committee candidates.

The WILPF 2015 Congress elected a new Executive Committee, which consists of a President, four Vice Presidents, and a Treasurer (plus our Secretary General, Madeleine Rees).

All of the nominees provided insight into the personal journeys that led them to being involved in and passionate about WILPF.

The candidates were diverse in terms of years of involvement in WILPF, experiences, and origin.

What they all had in common, however, was their devotion to speaking out for the values embedded in WILPF  – demilitarisation, human rights, women, peace and security, and social and economic justice.

When it came to ballot voting, the room was buzzing with excitement and the crowd cheered with enormous enthusiasm when Kozue Akibayashi was announced as new International President. Both candidates for President, Ms Akibayashi and Ms Hanan Awwad, are pictured below. 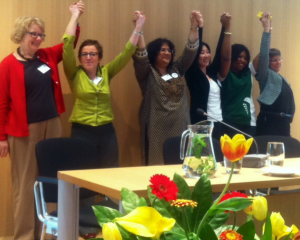 We had the chance to catch Kozue right after the votes were in. Here are her reflections on her history with WILPF, the energy of the elections in the Peace Palace, and her plans for the future.

Congratulations! Just moments ago you were elected the new president of WILPF.

How did you feel when you heard your name called out?

I was excited, I was happy.

What were the highlights of WILPF Congress 2015, your fifth Congress?

The discussion on the Manifesto. I have my own views and opinions of it, and it was great to have a discussion of the draft Manifesto, because we’d never done that before.

What are you most looking forward to as the new president?

I would like to deepen our gender analysis, which I have already started to see happen. I’m glad there has been more explicit discussion on the analysis.

Issues vary region to region, community to community, but as one of the oldest NGOs, our strength lies in our conceptual work. And it’s a real feminist praxis that when we talk about issues and problems, we extract ideas and concepts, we analyse, and we go back to how to address the issues. I think the beauty lies in the process. At the same time, of course, it is difficult.

It was good to see younger generations, since I was one of them years ago!

And it seems more professional. This shows that the organisation grew to be able to offer more opportunities to young professional women and men. And that’s very good.

What are your priorities for the next three years?

I’m not from a directly conflict affected community, but my work on hostile communities, United States military bases in Japan’s case, is unique, and I think it offers a lot. These experiences of these women who I’ve been working with, their thinking and ideas, offer more holistic, comprehensive analysis of armed conflicts.

It’s very important to make the connection clear, that so called peacetime societies are in continuum.

What are you looking forward to at WILPF 2015 Conference: Women’s Power to Stop War?

The Conference looks fantastic, has really attracted many wonderful people from different communities on the ground, but also engaged our scholars. I know I have many non WILPF friends coming which is very good, and there will be such a wide variety of meetings there.

Why did you decide to become an active member of WILPF?

I always wanted to be a peace activist, and a feminist, since I was 10 years old. I started to work with WILPF because of its perception on root causes of war. There are not many organisations that do that. But that is what WILPF started articulating, the connection between gender discrimination and war. No one else has done it and there are still only a few who promote that issue.

Do you have any final comments?

We need everyone’s help for us to go on!