Let Us Not Forget DRC

Let Us Not Forget DRC

On Wednesday 16 September WILPF (and our DRC section) in collaboration with Franciscans International, FIDH and World Council of Churches, organised and hosted an event at the 30th session of the Human Rights Council concerning the current human rights situation in the Democratic Republic of the Congo (RDC). Even though the government of DRC wants to take the country out of the attention of the UN system, we believe only continued pressure can take us to sustainable peace.

The following year and a half will be of great importance for RDC, as multiple elections will take place including the presidential and legislative elections which should take place in November 2016.

However, Reverend Kakule Molo expressed his concerns for the environment surrounding the preparation of this third electoral process, which has not been sufficiently inclusive. Concerns were expressed that there might not be enough funds to finance the whole electoral process, casting shadows on their effectiveness. 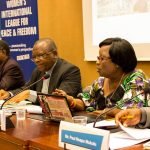 Ms. Annie Matundo Mbambi, President of WILPF Democratic Republic of Congo Section, pointed out how the uncontrolled flow of small arms are exasperating security in the country.

Small arms have an impact in exacerbating gender-based violence, causing thousand of women to be victims of sexual violence under the threat of weapons. She stressed that both civilians and armed groups perpetuate this crime; making the identification of the guilty more difficult, perpetuate this crime.

Unfortunately, sexual violence remains a phenomenon highly unpunished. Consequently, the country needs the systematic implementation of laws on sexual violence in order to ensure reparation and justice for the victims of this crime.

The risks of being a human rights’ defender

Gender-based violence is just one of the many violations of human rights that RDC’s citizens need to face, being a human rights defender is a dangerous challenge in DRC.

Mr Pauls Naspu, Ligue des Electors and FIDH, shared his experience as a human right defender and the violence he had to face. Since 2006, in fact, Mr Naspu has lived in exile to escape from repression by the security forces. In this general context of impunity, many people are threatened and many human rights violations are not persecuted, making elections a great opportunity to bring change about.

Impunity and corruption characterise also the mining sector of the country. Natural resources are extracted by international corporations or armed groups to feed the supply chains of the technological industries. However, no attention is paid to the conditions of workers extracting the minerals or to the impact that this industry has in perpetuating the conflict.

As Msgr Fridolin Ambongo argued, the mining process is accompanied by several human rights violations. To begin with, people are displaced and mines are settled without any sort of reparation. Once the mining company has taken control of the area systematic violations of human rights take place such as forced labour.

Moreover, many mining companies, using corruption and international impunity, do not uphold to their commitments, at the expenses of the Congolese people.

Representatives from the Pigmy people were also present at the event and reminded of the many human rights violations that the pigmy are subject to, including within the context of the country and as victims of expropriation for the use of natural resources.

Mr Floribert Azuluni, one of the founders of the Congolese citizens movement Flimbi, offered his testimony. In March 2015 some strong young men irrupted in the room where the movement was giving a conference and seized thirteen of its members with great violence and the rest of them were forced to live clandestinely in the country and lived with the feared of being kidnapped.

The members of Flimbi were labeled of terrorists by the government while the main objective of the organisation was to give space to young people to be involved in the democratic process within their country.