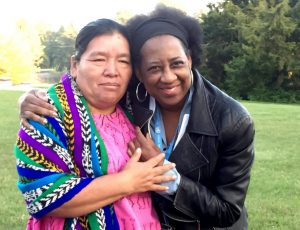 Participants from Guatemala and Haiti at the second session of the Intergovernmental Working Group on TNCs in Palais de Nations, Geneva. Photo: WILPF.

The second session of the Intergovernmental Working Group on Transnational Corporations and Other Business Enterprises (the Working Group) took place from 24 to 28 October 2016. Several issues relevant to the proposed treaty were discussed in panel debates with academic, NGO and other experts (e.g. impacts of the operations of TNCs and other business enterprises; scope of the treaty; states’ extraterritorial obligations; access to remedies).

Drawing from the analysis in WILPF’s report on artisanal mining in the DRC, we made three statements: emphasising the fundamental importance of meaningful participation of affected women and of integrating a gender perspective throughout the drafting process; recommending mandatory gender impact assessments; and highlighting the need to take into account the gender dimensions of the right to an effective remedy. A summary of our statements is reflected in the UN report of the session.

As part of the Treaty Alliance, we cosponsored a side event on obstacles to access to justice from the view of the community lawyers and advocates. At the event spoke Indigenous Mayan Q’eqchi leader Angelica Choc, widow of Adolfo Ich, who is fighting for justice in Guatemala and Canada for the murder of her husband by a mining company security guards. She is also supporting the 11 Q’eqchi’ women who were gang-raped by security personnel of a Canadian mining company’s subsidiary and who have also sought justice before a Canadian court. Their case is featured in the shadow report for the CEDAW Committee’s review of Canada presented jointly by the Plataforma Internacional contra la Impunidad and WILPF.

What happens next with regard to the treaty drafting process?

The Chair of the Working Group will prepare elements for the draft legally binding instrument for substantive negotiations at the third session that will be held in 2017.