I am writing to congratulate you on your re-election as President of the United States of America. As the election results are being tallied, it has become clear that the majority of your support came from women of all classes and races, and men of marginalized ethnic groups. Members of the Women’s International League for Peace and Freedom US chapters are among those who campaigned vigorously for your return to office. 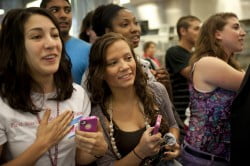 The Women’s International League for Peace and Freedom will make history during your second term in office, Mr President. In 2015, we will mark our centenary: a hundred years of organized women actively working to reduce militarization and stop warfare. The League began in the USA in 1915 as a women’s peace movement to end the First World War and soon spread to Europe. In its decades of activism it has become a global movement working to reduce all forms of armed violence and military conflict. Our work continues today in capitals and in conflict zones, and our members number in the thousands.

Your own successful election campaigns, Mr President, have taught you that mobilised women are a significant political force. Women are much more likely than men to vote for moderate political leaders and, as less powerful members of society, anticipate the negative consequences of extremist political positions with great acuity.

What you have learned in your own country is also true elsewhere. The Women’s International League for Peace and Freedom is working with politically involved women all over the Middle East and North Africa who are claiming their right to full engagement in every aspect of decision-making as their countries strive for greater and more inclusive governance. Yet the international community persists in overlooking these women and ignores the moderate, reconciliatory and peace-based policies they endorse. This indifference to women’s opinions only serves to amplify the voices of those who endorse religious extremism, oppose democratic inclusion and misuse ‘culture’ to justify the continued oppression of half the population. The impacts on peace and development are devastating, not just in the region but for all nations on earth.

One hundred years of women’s leadership in promoting peace gives a mandate to all political leaders to take women’s opinions and decision-making seriously. For one hundred years, women have persistently argued that the world does not need to be torn apart by militarised violence. Our unified voices are as clear now as they were in 1915.

Your second term of office, Mr President, gives you a magnificent opportunity to be on the side of history. We call on you to support women’s inclusion in all your foreign policy decision-making. We call on you to honour the mandate given to you by those millions of American women who returned you to office last night. We remind you that when women’s opinions are taken seriously, the world regains balance and the human family moves forward to greater prosperity for all.