Press Release: Women in the DRC at the Bottom of Supply Chains: The Invisible Reason for a Legally Binding Instrument on Transnational Corporations and Other Business Enterprises

Press Release: Women in the DRC at the Bottom of Supply Chains: The Invisible Reason for a Legally Binding Instrument on Transnational Corporations and Other Business Enterprises

New report documents gender discrimination, slavery-like conditions, deterioration of reproductive health, violence, forced displacement, and sexual exploitation experienced by women in (and because of) artisanal mines in the DRC. The timely report is released few days before the second session of the intergovernmental working group on a legally binding instrument on transnational corporations and other business enterprises, scheduled to take place in Geneva on 24-28 October 2016. 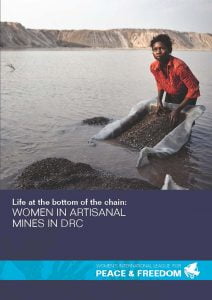 States cannot afford to continue ignoring the gendered aspects of corporate human rights abuses, says Women’s International League for Peace and Freedom (WILPF) today, following the publication of the report Life at the bottom of the chain: Women in artisanal mining in DRC.

Artisanal mining accounts for over 80% of mined products exported by the DRC, and women generally play a much larger – but often invisible – role in artisanal mining than in the large-scale mining sector. The report documents how women are among the most impacted by the insalubrious and precarious conditions and the militarisation of artisanal mining sites.

“The power of corporations and financiers has far outstripped the ability of elected governments to moderate or control them. It is time for a binding legal framework to regulate the activities of transnational corporations and other business enterprises, ” says Madeleine Rees, WILPF Secretary General, stressing that “the legitimacy of a future treaty will depend on whether and how gender analysis and participation of affected women are part of the drafting process.”

“If a future treaty is to protect and promote women’s rights effectively, then gender analysis needs to be integrated throughout the drafting process,” argues Rees, referring to the fact women experience direct and indirect consequences of mining activities in different, and often more pronounced, ways than men. This is particularly so in the case of artisanal mining. In the DRC mining sites covered in WILPF’s research, women’s roles are generally relegated to droumage (crushing, sorting and washing of minerals, sifting the crushed minerals, and processing the waste), which are the most toxic mining activities, selling the minerals, or to marginal support roles with minimal profitability.

A legally binding treaty has the potential to assign clearer responsibilities to all actors in the supply chain and to prevent violations against women. “For example, corporations should be required to ensure that their supply chains are subject to strict gender considerations and to assess whether their activities strengthen or exacerbate existing gender-based inequalities,” explains Rees.

It is part of WILPF’s work on bringing to light human rights violations relating to the activities of business enterprises, their impact on women, and their relationship with the root causes of conflicts. The upcoming session of the ‘Open-ended intergovernmental working group on transnational corporations and other business enterprises with respect to human rights’ provides the opportunity to advance towards an enhanced global regulatory framework for the accountability of transnational corporations.

WILPF is part of the Treaty Alliance.

Fact sheet on women in artisanal mining in the DRC, gender analysis, and the treaty on multinational corporations and women’s human rights

Publication Life at the bottom of the chain: Women in artisanal mining in DRC (French and English)

Pictures under the common creative license can be found on WILPF’s Flickr account. Please credit the photographer.

By WILPF International|2020-03-18T09:10:11+01:0021 October 2016|Uncategorized|Comments Off on Press Release: Women in the DRC at the Bottom of Supply Chains: The Invisible Reason for a Legally Binding Instrument on Transnational Corporations and Other Business Enterprises