This past Wednesday WILPF attended a panel organised by the UN Working Group on the Use of Mercenaries, focusing on the use of private military and security companies (PMSCs) by the United Nations.

The Working Group is aiming to create higher standards of accountability for this industry, in recognition of the increasing role these companies play in issues of international peace and security. The goal is to create a General Assembly Resolution to be adopted this year, creating a set of guidelines for the UN in hiring these companies, which it has been doing increasingly in recent years. 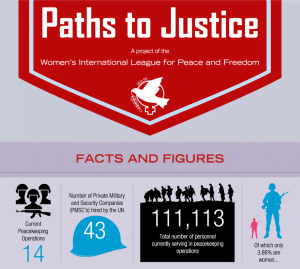 Paths to Justice infographic. To see it in full click on the image.

WILPF is very much engaged in the issue of UN accountability through our ‘Paths To Justice’ project, which focuses on improving peacekeeping accountabilities for sexual violence and abuse against local civilian populations through advocacy.

Right now, victims of these horrific abuses have close to no access to justice, as we have made clear in our infographic. Have a look and see just how difficult the path to justice is for victims right now!

Therefore, with this work in mind, we were quite disappointed to see the panel focus on the risks unregulated PMSCs pose to ‘UN staff, its operations, and its image’, rather than the greater risks a culture of impunity poses to the civilian, often vulnerable populations peacekeepers are actually supposed to protect.

More broadly, the panel seemed stuck in the old-fashioned, militaristic and patriarchal way of thinking about the role these private contractors play, invoking concepts like the ‘loyalties’ of PMSC staff multiple times.

Instead, the Working Group and the UN in general, should rather approach these issues from a human rights perspective, making sure peace-building through the protection of human rights is the primary focus of all peacekeepers, whether privately contracted or otherwise.

Only when peace-building is integrated with human rights in this way can UN peacekeeping operations be truly successful.

Hope for the Future?

On the bright side, a number of people at the event, including State representatives and members of the Working Group, seemed very interested and open to our message.

Further, although the panel did not address the security of civilians in depth, this preoccupation was indeed underlined by the Chair of the Working Group on the use of Mercenaries which indeed reminded that the final stakeholders of the work being done by the UN are the civilians and that their security is often threatened by the uncontrolled and unregulated use of PMSCs.

Now that this initial contact has been made, we will try to meet with the Working Group and have our perspectives included in the GA Resolution, as one small step in the right direction.

To learn more about these issues take a look at our Paths to Justice Project.