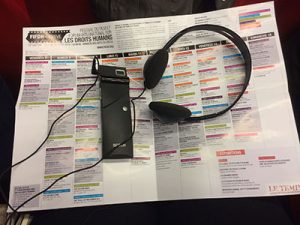 FIFDH prepared for Russian to English and French translation

It is that time of year again, Geneva is hosting the International Film Festival and Forum on Human Rights (FIFDH). The festival, renowned for providing a platform for discussion on human rights, is dedicated this year to Ales Bialiatski of Belarus and Sombath Somphone of Laos.

Ales Bialiatski is a human rights defender currently imprisoned, which is believed to be an attempt to hinder his efforts to support human rights. Similarly, Sombath Somphone is an Laotian human rights defender who has been missing for over a year. These men are real life demonstrators for the need of festivals like FIFDH and its continued occurrence to raise the profile of human rights atrocities all over the world.

The festival this year is to host some 40 films, spanning the genres of creative to fictional. On the 9th of March, WILPF attended Pussy Riot: A Punk Prayer, a documentary detailing the arrest and prosecution of three members of the punk bank after their infamous performance in Moscow’s Cathedral of Christ the Saviour.

The event concluded with a panel discussion planned by FIFDH with Maria Alyokhina (Previously jailed member of Pussy Riot), Denis Bilunov (Russian Journalist) and Zoïa Svetova (Independent Journalist) moderated by Thérèse Obrecht Hodler (President of Reporters Without Borders Switzerland). Topics on the table for discussion stretched from the theme of the movie, to the current work of Maria Alyokhina after her release from prison in December 2013.

Pussy Riot was founded in 2012 after the current President of Russia, Vladimir Putin was appointed to his third term. Spurred on by what is widely thought as an unconstitutional move, the feminist punk band formed and unveiled their trademark fluorescent ski masks to make political statements about the current state of policy in their native Russia.

Shortly after their formation the group shot to international headlines after their performance of ‘Virgin Mary Put Putin Away’ on the alter steps of the tallest Orthodox Christian cathedral in the world. Causing great offence to the portions of the Russia population, Maria Alyokhina, Nadezhda Tolokonnikova and Yekaterina Samutsevich were arrested. The three were charged with disrupting social order, wearing inappropriate clothing in the cathedral and trespassing and were found guilty of hooliganism.

Since their trial, Yekaterina Samutsevich was released on a suspended sentence during an appeal in late 2012 while Maria Alyokhina and Nadezhda Tolokonnikova were released in before late December 2013 under amnesty granted by the Russian government, in what is widely seen as a venture in preparation to the Winter Olympics in the Russian resort city of Sochi in an attempt to gain the good graces of the international media.

The documentary is directed by Mike Lerner and Maxim Pozdorovkin in a dual UK and Russian undertaking. It follows the story of the group and the three arrested members through the initial performance, the trial and sentencing.

It shows exclusive interviews with the families of the arrested members, and by doing so provides integral insight into the logic behind the group and the cathedral performance. The women have their pasts conveyed through archive footage of their childhood giving reason to their current interest in political affairs. Without providing spoilers, it gives insight into the paths taken by the women, for instance in the case of Yekaterina Samutsevich, depicting a childhood of soviet era indulgences leading to an adolescence of soviet destruction influencing her down the path of activism.

The audience is transported on the journey with Maria Alyokhina, Nadezhda Tolokonnikova and Yekaterina Samutsevich through to late 2012. The date of production of the film unfortunately makes the facts slightly outdated, however this has no effect on the degree to which viewers are impacted by the story.

Alongside the other panelists, Denis Bilunov and Zoïa Svetova, Maria Alyokhina spoke of the current status of Russian President Vladimir Putin’s power. Referencing the current situation in the Ukraine, they spoke of the punishment inflicted on political demonstrators in Russia and their imprisonment. The gradual suppression of free speech within society, coupled with the stamp down of oppositional dialogue is what is perceived by the panels and the bolstering of control by the current administration. These human rights abuses, according to the panelists, are the resulting consequences of Putin reinforcing his power, a crackdown so to speak in modern Russian society.

Maria Alyokhina speaking with the panel on life after prison

But what does the future hold for Maria Alyokhina? After the film we learnt that during her incarceration, Maria experienced conditions deemed inhuman and so with her release she has taken up the plight of the oppressed and persecuted women in the Russian penal system. By taking the fame brought to her, Maria Alyokhina wishes to use it to promote these injustices, repeating the words of the women she left behind in prison.

Although released, it does not mean that Maria Alyokhina and Nadezhda Tolokonnikova are free from harassment. A few days before appearing at the FIFDH, both women were attacked, leading to Maria needing stitches in her head and treatment for a concussion, not to mention the green paint splattered all over their faces.

Have a look below at the trailer for Pussy Riot: A Punk Prayer!