The recent brutal rape of a 23-year-old student in Delhi has left both India and the international community reeling. It has sparked unprecedented debate about the treatment of women in India and the social stigma attached so intrinsically to rape.

Shirin Marker spoke to Ila Pathak, President of WILPF India, to find out what WILPF has been doing there in wake of the girl’s death, and if attitudes are really changing towards rape.

– The demonstration was held jointly between WILPF India and three other organisations. These organisations were AWAG (the NGO to which I belong), Gujarat Mahila Federation (a network of women’s NGOs in our State) and All India Mahila Sanskritik Sangathan (active on socio-cultural issues).

There were numerous aims to the demonstration. These were: 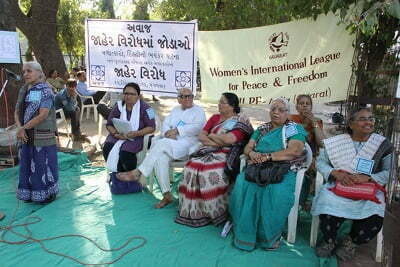 More than 150 women and men gathered for the demonstration.

Since the protests in Delhi received international media coverage, I thought that it was very important for WILPF’s India Section to join in the demonstrations.

Many of the women in the other participating NGOs are also WILPFers.

The rape case has received an incredible amount of international media coverage. Why do you think that now, as opposed to any time previously, people seem more willing to address the problem of the treatment of women in India?

– For this specific case there was insistent and loud uproar for a great number of days. What we saw on our TV screens during the course of those days has guided my understanding of the issue.

It is important to note that a large number of the protestors were young people. They shared the victim’s dreams and ideas.

The victim was their age; she had the same dream of carving a career for herself through studying. She was also someone who did not care for traditional concepts, like ‘a girl should not leave her home after dark’, ‘a girl ought not to move around with a boy’ and so on. 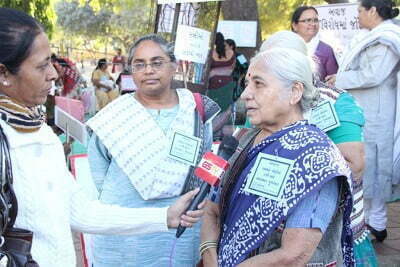 I see this uprising as one that opposes the backlash against the women’s movement. Girls are now studying and are visible everywhere: on roads, in buses, behind counters in malls, in offices and so on. The traditional mind set cannot accept the liberated woman and tries to strike back with sexual violence.

This is why the number of rapes has increased recently all over India. The advice now given to girls echoes the patriarchal mindset that wants to restrain women within their homes, and punishes them if they attempt to go out.

What has WILPF India been doing in light of the death of the girl?

– On the day the victim died, WILPF India joined in a candlelit vigil and afterwards, a discussion club where I was invited to initiate the discussion.

I presented the changes we had demanded in the legislation concerning rape, the overhauling of the system of policing and fast-tracking justice.

These demands were prepared and sent to a committee set up by the Government of India.

Having thus responded to the call of the Government of India, we turned our attention to our State of Gujarat. 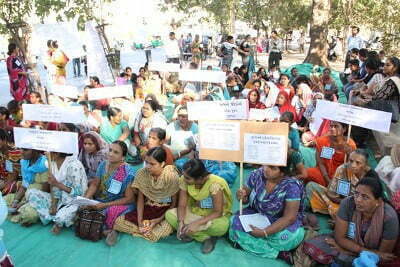 Legislation of this type of offence is not state concern, but policing and fast tracking of justice are. In order to have responses from a large section of society we held a meeting of state wide NGOs and members of civil society.

Because we want to prevent rape and murder, we have asked the Government of Gujarat State to overhaul investigating and implementing agencies and set up fast-track courts with concrete deterrent punishments for violators of women’s bodies.

The final draft will be presented to the Government of Gujarat next week.

What do you think is the most important thing for the Indian government to do now, to focus attention on social stigmas attached to rape and to improve attitudes towards women?

– As far as social stigma is concerned we largely tend to believe that the spread of education for equality will have more of an impact than anything else. We have asked for improved textbooks in schools, ones that are void of patriarchal dictates.

The State Government is planning to further educate the police force, and members of AWAG (my NGO) are being asked to join as faculty members.

There are, of course, no quick fixes in sight, but history tells us that society does move forward after such backlashes.