Reclaiming Economic, Social and Cultural Rights in Bosnia and Herzegovina

Reclaiming Economic, Social and Cultural Rights in Bosnia and Herzegovina

This year we have seen many new and old conflicts arise around the world. As usual, the narrative surrounding these conflicts has been focused on men with guns. While men with guns have a prerogative to have their interest represented in peace talks and negotiations, the perspective of the civilian population suffering from the violence, predominantly women and children, is ignored and their voices silenced.

Since 2013 WILPF has been spearheading a ground-breaking initiative called ‘Women Organising for Change in Syria and Bosnia and Herzegovina’. The initiative focuses on the importance of representing the experiences of women who went through, or are going through, an armed conflict. It works to change the dominant narrative that women are victims and rather bring to the forefront their vision of peace.

Through this initiative we advocate for women’s rights to be represented at all levels in the peace building process, we put the spotlight on the peace activism of women during war, we defend the human rights of women and promote social, economic and political justice.

Our vision of peace

This summer, as a continuation of the activities organised under this initiative, Bosnian women peace activists met to discuss how they could reclaim their economic, social and cultural rights that were so seriously circumscribed in the Dayton Peace Agreement and whose lack of implementation is threatening the peace in the Bosnia and Herzegovina.

The workshop was focused on three particularly vulnerable categories in the country – survivors of wartime sexualised violence, families of missing persons and internally displaced persons and returnees. The overall discussion was on how the society can reclaim economic, social and cultural rights in a situation where access to them is being hampered by the lack of political vision and outright looting of Bosnia by political elites, resembling mafia more than anything else.

The workshop was introduced by WILPF’s General Secretary Madeleine Rees, who gave an overview of economic, social and cultural rights and spoke of how their implementation appears in post conflict societies, what it should look like, why it is not like that and what needs to be done in order to change that situation.

Her introduction was followed by Bosnian activists on how access to economic, social and cultural rights looks in Bosnia today from the perspective of the three groups mentioned above.

Strategising for the future 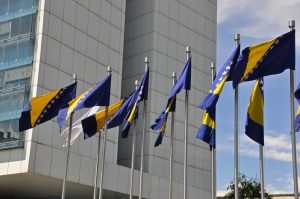 The discussion highlighted many problems arising when reparations for victims of war are placed in the context of the social protection system that is inadequate to fulfil non-war related needs, and insufficient to fulfil those needs stemming from the gross human rights violations that took place during the 1992-1995 war in Bosnia.

The discussion also showed that although the three categories mentioned above are the most vulnerable, the access to economic, social and cultural rights is hampered for all citizens of Bosnia and Herzegovina. While some of the economic, social and cultural rights do exist within the Bosnian legal framework, many of these rights are inaccessible due to complicated administrative set-up of the country and poor implementation of the laws.

The inability of local politicians and the international community to deal with the situation where too many Bosnians find themselves in dire poverty is a serious threat towards the process of building sustainable peace in the country. Bosnian activists concluded that immediate action is required if a complete collapse of the Bosnian society is to be deterred.

It was thus decided that in the absence of a political vision for how to resolve the many economic and social problems the country finds itself in, the organisations and activists gathered around this initiative will start working on their own proposal for reparations programme for the victims of war.

This programme will constitute a first step towards ensuring appropriate and effective legislative and administrative procedures for fair, affective and prompt access to economic, social and cultural rights, removing the competition between the different groups in need that is currently built in the Bosnian social protection system.

Please read the report for full summary of the discussion and conclusions.