Reflections on the CSW

Reflections on the CSW

Following the end of the first week of Commission on the Status of Women (CSW), there is much to reflect upon. Inside the UN, member states have been negotiating the agreed conclusions; a document intended to provide the next practical steps to realizing gender equality, and implementation of the Beijing Platform for Action.

But as the negotiations progress, it is clear that the obstructive states, including Russia, Iran the Holy See and others, remain committed to derailing the process. Not only do these actors seek to undermine new progressive language, but also to regress long established international commitments on women’s rights and gender equality. 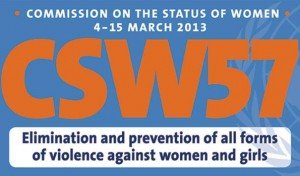 Along side this we are also seeing the failure of progressive states to present language on militarization, military spending and arms proliferation. Though there are pushes for the inclusion of the women peace and security resolutions, to date there is no connection being made between gender inequality, violence against women, and militarization. We are moving backwards from the progress made at Beijing in 1995. Especially given this years CSW is immediately followed by the new round of negotiations on the Arms Trade Treaty, it is difficult not to be entirely cynical about the failure and hypocrisy of the international system to be any real force for positive change.

Yet outside of the UN, more than six thousand women, from civil society are organizing around these very issues. This is a new record for CSW, and really speaks the commitment and power of the global women’s movement. Over the past week, I have attended numerous side events, and spoken with women from all over the world who want to see a new global agenda for change. They are speaking to the need to drastically reform the economic, political, security and social structures that not only support, but depend upon the perpetuation of gender inequality for their survival.

Women here are sharing their stories, and relating the intimate connections between violence against women and militarism they experience in their societies.  The stories vary, but the manifestations are the same, across cultures and contexts. I have been physically shaken listening to so many of these stories, and overwhelmed by the powerful voices of the women relaying them.

So then, with this great divide between the talk of member states within the UN building, and the radical voice of the women (and some men) organizing around the UN, I ask myself – how can we remain hopeful? How can we use the power of our voice to influence real change?

I do not have the answers, but I do have some cause for hope. Last year a study was published, which showed the single most effective means to achieving gains in women’s rights and gender equality is solidarity and organized women’s movements. Six thousand women are here in solidarity, speaking across a range of issues, but with united voice. It seems likely that we will leave CSW with no agreed conclusions – but the solidarity of the women’s movement will only be strengthened – and we will continue to work, and to speak with united voice until we have the radical change we seek.