Remembering Our Past and Rebuilding Our Future: Accounts of Pacifist and Antimilitary Women in Colombia

Remembering Our Past and Rebuilding Our Future: Accounts of Pacifist and Antimilitary Women in Colombia

In Bogotá, Colombia, on 22 May 2015, close to 300 academics, diplomats, journalists, women’s rights defenders, feminist activists and students attended the one-day event organised by WILPF Colombia to commemorate and celebrate WILPF´s 100-year anniversary. The event also served to mark the history of pacifist and antimilitary women in Colombia as part of a series of worldwide events organised by different WILPF Sections 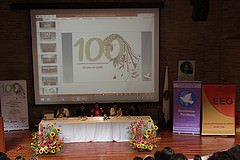 The conference combined the academic research of important representatives on the analysis and historical review of the pioneers of pacifism internationally and in Colombia, together with examples of activism carried out by brave women who chose to transform the existing violent structures using initiatives involving women at the local level to promote peace. This conference allowed the voices and political views of the Afro-Colombian, indigenous, peasant and mestizo/urban women to come together. One of the main messages of the day was the need to strengthen partnerships between these groups of women, academics and activists, in order to strengthen our work and our voice in building peace in Colombia. The proceedings of the workshop will be available in the coming months along with some short videos of the panels presented.

The event was held in alliance with the Department of Gender Studies at the National University of Colombia. As part of this event, speakers were invited to reconstruct, honour and make visible the lives and work of pacifist and anti-military women who have struggled to build peace in Colombia throughout the 60-year armed conflict. Guest speakers included Carmen Magallon Portoles, President of WILPF Spain, Dora Isabel Díaz, professor of the Gender Studies Department at the National University, and Diana Espinosa from UN Women.

Since its inception in 1998, WILPF Colombia’s main work has been carried out in three regions: Bolivar, Meta and Bogota, supporting and empowering women victims of the armed conflict, forced displacement and sexual violence. As part of the 100 year celebrations in Colombia, the Cartagena office organised an afternoon event on 26 June 2015, to honour the work and lives of many women human rights defenders that have worked with WILPF Colombia throughout its history.

The event “Women’s Power to Build Peace” included speakers such as Marlene Barrios, one of the first women leaders to have worked with WILPF Colombia when projects began in various towns in the region of Bolivar including San Juan, Revivir, and San José de Los Campanos. The speakers shared their experiences working with WILPF Colombia and their challenges as women’s rights leaders in a possible post-conflict setting.

The event closed with an art exhibition of the participants’ understanding of what women’s power to build peace means to them.

A brief history of LIMPAL Colombia

WILPF Colombia has been in operation since 1998 and its projects are based on principles of dignity, freedom, peace, justice and solidarity. Our aim is to be part of a pacifist and social women’s movement committed to the reconstruction of a just, egalitarian and inclusive society.

WILPF Colombia seeks to become one of the leading women’s rights organisations committed to building a peaceful and just society where women and girls feel empowered to claim their rights. WILPF Colombia has offices in Bogotá and Cartagena, and aims to soon open a new office in Villavicencio.