Right to Food – a Matter of Gender Equality?

Right to Food – a Matter of Gender Equality? 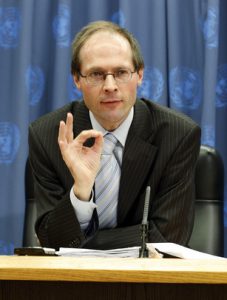 The Special Rapporteur on the Right to Food presented his report to the Human Rights Council last week, stressing that ending hunger and malnutrition is actually all about gender equality.

He started his address by citing a study which concludes that 43% of the reduction of food insecurity in developing countries in recent years can be attributed to the progress in women’s access to education. The difference this progress in women’s education has made in reducing hunger and malnutrition is more significant than that of the increase in global agricultural production.

In other words, ending hunger and malnutrition is not an issue of increasing the world’s food supply. It is rather about ensuring equality amongst the consumers and producers of that food supply.

In fact, all studies the Rapporteur has recently come across point to this strong correlation between gender equality and food security, which is why he dedicated his entire rapport to this correlation.

This correlation can mostly be explained by the ‘feminization of agriculture’. In short, this means there is a general trend in developing countries for men to leave their farms and go to the city to find alternative work. Meanwhile, women, because they are generally less educated in developing countries and because of ingrained gender roles in society, stay behind, looking after the children and the farm.

Women are therefore now more than ever tasked with not only looking after the family and household, but also being responsible for the farming and agricultural production. In practice, due to a lack of access to resources and services and an undervaluing of their work in the domestic sphere, this means not having enough time for both. Regardless of this, women have proved to be more successful in reducing food insecurity as they have increasingly taken up the farming and agricultural work.

The solutions the Rapporteur suggested in his report are therefore two-fold:

He concludes his remarks by noting that the most valuable investment we could make in reducing hunger, malnutrition and even poverty is an investment in supporting women as farmers. We need to strengthen their bargaining positions within the household by a better sharing of tasks and bolstering their access to property, credit, education and economic opportunities.

Gender equality is therefore not only a goal to be achieved on its own, but is also a shortcut to ending hunger and malnutrition globally.

The Resolution on the Right to Food was later introduced in this Human Rights Council session and emphasized the need for this gender approach to the Right to Food to fulfil the specific needs of women and girls. It however fell short of acknowledgement of the positive contributions that gender equality can bring about for food security. The resolution was subsequently unanimously adopted.