Russian Feminists Rise up for Peace in the Ukraine

Russian Feminists Rise up for Peace in the Ukraine

No one could have failed to take notice of what is happening in Ukraine and specifically the Crimea. Arguments for the rights of all parties are being thrashed out in the Russian media, in the Western media and international fora and there are truths and lies in both.

International lawyers voice different opinions as to the legality of the actions of both the Russian authorities and the Ukrainians. Of course, its what lawyers do; justify the action of your client.

But with rhetoric being ratcheted up on all sides, with militarism now escalating, and more lives being lost, where are the voices of reason? Those who reject violence as a means of dispute resolution?

Below is a strong message from Russian feminists who are doing what WILPF did in 1915: standing up against the narrative of war, and providing a truthful reflection of its reality for women.

They are taking risks to say this.  It might even be that giving them support increases that risk. What we must be doing is getting our own voices heard with our own governments, supporting a political settlement and eschewing the threat or use of force. 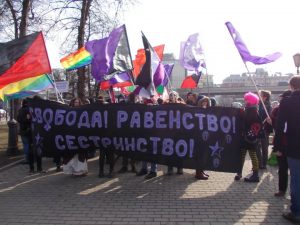 On International Women’s day this year in Moscow, Russian feminists gathered in an antiwar protest supporting Ukraine women and a resolution to the violence. The activists were attacked by onlookers, thus marking the second year of peaceful protests prosecuted, as the previous year they were targeted by police.

Below is their statement, kindly translated by Valerie Sperling from the original text.

War is always frightening. Even if it’s a war of liberation, a “civilized” war, a war “on a higher level” – it brings death and violence regardless. War is a proclamation of the power of force, military diktat, the cultivation of aggression, impunity for “collateral” crimes, and so on — it is patriarchy in pure form.  Feminists are against war by definition. Not because of some ephemeral, ostensibly congenital, women’s pacifism and other nonsense about women’s “destiny” to only give birth and care for others, but because it’s women who turn out to be the most marginal – it’s us who are going to be raped by the occupiers and the liberators, it’s our children who we carried and nourished with our own bodies, who are going to be killed; it’s we who have to work the machines while the men are off killing each other; it’s us who will be chased into military brothels to satisfy the “natural needs” of soldiers, and it’s we who will be told to push away our demands for equality, and meekly give birth to more new sons of the nation and be obedient helpers to men.

We support the Ukrainian women in their efforts to bring order in their country. We support their protest against the occupier-aggression of Russia.
We saw how the efforts of women on Maidan were neutralized, and how attempts were made to instill in them the idea that they were only there to bring sandwiches to the “real fighters and revolutionaries” and clean up after them, and how they were insulted by proposals to sexually satisfy the comrades and the Berkut (riot police). We know that without women the Maidan would have fallen, and that each activist woman of Maidan is a heroine.

No war or revolution has any sense for women if it’s not a war against patriarchy, if it’s not a feminist revolution. We’re going to be seen only as a resource and as servants for men until we start putting our demands forth, and until we continually put forth our rights each time we’re told that something else is more important at the present time. We are half of humanity! Nothing can be more important than our rights!
Feminism, freedom, women’s solidarity!

For the original Russian text view the flyer