Side Event: Women’s Multidimensional Insecurities Amidst the Shrinking Civil Society Space in Yemen and Libya

Geneva, Switzerland- On the margins of the 36th session of the Human Rights Council, the Women’s International League for Peace and Freedom (WILPF) and Women Peacemakers Program (WPP) hosted a delegation of women activists from Libya and Yemen. The side event gave these brave women the space to address the issues and concerns they are facing as women and women led civil society during the difficult times of conflict. 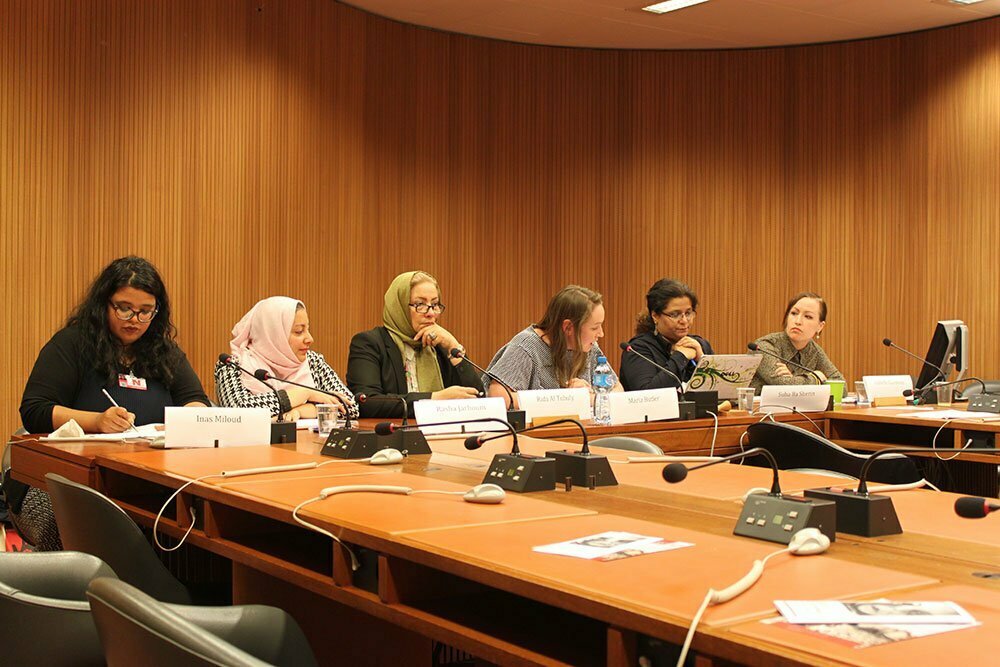 The panel: Experts on Libya and Yemen

The event brought together women activists from Libya; Dr. Rida Al Tubuly and Inas Miloud, and Yemen; Rasha Jarhoum and Suha Ba Sherin. The four panelists discussed the different aspects of women’s multidimensional insecurities and how they are manifesting similarly or differently in each context.

Another key panelist was Isabelle Geuskens, the Executive Director of Women Peacemakers Program, who has worked extensively on Counterterrorism financing and the impact on gender equality. Geuskens talked about how the new trends of financing are resulting in shrinking spaces for women led civil society organisations (CSOs) and what can be done to counter this impact.

The international community and more disappointments

Dr Rida Al Tubuly, Director of Together We Build It Organisation, shared the feeling of disappointment regarding the international responses and the exclusion of women from the peace negotiations in Libya despite many commitments made by the international community to gender equality and women participation.

Al Tubuly, touched on how Libyan women should not be seen as victims but activists lobbying and pushing to make their voices heard and their needs met. She concluded by urging the international community and donors to be more flexible in funding grass root organisations.

Difficulty of being a woman activist during conflict

Inas Miloud, Libyan activist and member of Together We Build It Organisation, highlighted the struggles of women activists in Libya, who put their life on the frontline every single day.

She discussed the recent phenomenon of targeting women activists and questioning their agency, which is inevitably resulting less space and visibility for their work. Miloud concluded by listing the achievements of Libyan activists and stressing how they should be supported.

The different roles Yemeni women are taking up during conflict

Suha Ba Sherin, a Yemeni gender expert, focused in her talk on the current dire situation in war torn Yemen, including the lack of humanitarian assistance and its impact on Yemeni civilians.

She shed a light on women’s involvement in hostilities through both political affiliation with warring parties and direct recruitment by armed groups.  Ba Sherin stressed that understanding and acknowledging this phenomenon is key to a comprehensive action to transform such involvement into peacebuilding rather than serving a political agenda.

Another key panelist from Yemen was the social researcher Rasha Jarhum. Jarhum focused on the positive role Yemeni women are playing during the armed conflict. She highlighted the work of women in helping releasing detainees, preventing child recruitment and sending aid to besieged cities when international organisations have failed to do so.

The armed conflicts in Libya and Yemen have a grave and disproportionate impact on women and girls who face “multidimensional insecurities”. As armed violence and the absence of rule of law continue to grow local efforts of women activists and women led civil society organisations is being jeopardized by the “shrinking civil society space”.

Women activists and CSOs have played an important role in both countries in pushing for peacebuilding and in mitigating the consequences of war on everyday life. WILPF and WPP urges the international community and donors to support the peaceful work of the civil societies, by protecting their existence and funding their grass roots activities.