The Gender Impact of Explosive Weapons in Syria and Nigeria

The Gender Impact of Explosive Weapons in Syria and Nigeria

On 17 March 2015, as part of the 28th Session of the Human Rights Council, WILPF held a side event exploring the specific impacts that the use of explosive weapons have on women.

At the event, WILPF’s Disarmament programme Reaching Critical Will presented their 2014 report Women and Explosive Weapons which provides a gender based analysis of such weapons. In addition, MENA Agenda 1325 project associate Laila Alodaat and WILPF Nigeria member Eze Oluchi Patience spoke on the specific impacts of explosive weapons on women in the contexts of Syria and Nigeria. 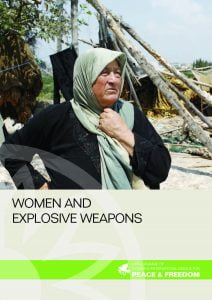 WILPF undertook a gender specific approach with the Women and Explosive Weapons Report. Our research proves the importance of strengthening a gender perspective in disarmament and arms control by demonstrating the impact of explosive weapons on women. The report is now also available in Arabic.

According to Reaching Critical Will, reports on armed conflict show that the main casualties of explosive weapons are civilians. However, most data available does not identify whether the civilians killed are women, men, or children.

With no gender or age specific data, the very real impact of explosive weapons on women remains invisible and women are further forgotten in responses to conflict.

This is troubling because the use of explosive weapons in populated areas can have a unique impact on women. Women can for example be  more exposed to attacks in residential areas because they are the ones most likely to conduct task revolving the household and in public spaces such as marketplaces.

Women are also severely affected  by the indirect costs of explosive weapons such as through the destruction of infrastructure, homes, and the loss of access to livelihoods. These stresses are compounded by discriminatory labour markets and  patriarchal structures that disadvantage women.

Also, because men are the centre of norms of conflict, when attacks do take place emergency care for men and active fighters are prioritised leaving women with less access to health care and social services.

The Experience of Explosive Weapons in Syria

At the side event, WILPF project associate Laila Alodaat described how the increasing use of explosive weapons such as barrel bombs have a devastating impact on civilians. 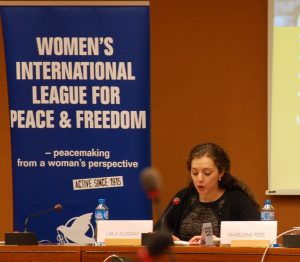 Laila Alodaat called on the Commission of Inquiry on Syria to examine the long term implications of the conflict on women, including the impact of explosive weapons, rather than focus narrowly on sexual and gender based violence.

According to a 2013 report by Action on Armed Violence, in Syria nine out of every ten of  explosive weapons victims are civilians. Worryingly, the latest Commission of Inquiry Report on Syria found that the use of barrel bombs has doubled since mid-2014.

The use of explosive weapons have a particularly high impact on women. A 2015 Human Rights Watch report stated that several doctors treating refugees have found that approximately 60% of all victims they treat are women and children, and that the majority of the victims were injured by fragments of explosive weapons.

Laila Alodaat pointed out that the devastating impact of the use of explosive weapons on women is not obvious because of a lack of segregated gender data. Without such data, it is impossible to anticipate the needs of women.

Following the presentation on Syria, Eze Oluchi Patience took over to describe the case of Nigeria where the use of explosive weapons has increased dramatically since the insurgency began in 2011.

According to her, women and girls are highly affected by the use of explosive weapons in public spaces such as marketplaces where they are more likely to be selling their farm products, running micro businesses, and performing household tasks such as shopping. 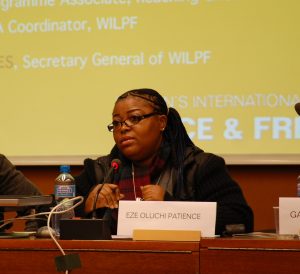 In fact, Eze Oluchi Patience reported that it is girls between the age of 10 and 12 years who are most likely to be killed by explosive weapons. This is because they are put at risk while completing household tasks which gender norms prescribe for them.

The ever present danger of explosive weapons in marketplaces also creates indirect effects as women no longer have access to goods or resources.

Communities which are displaced by explosions also have limited food or health care services. The burden of caring for families falls to women in these situations despite the lack of resources available to women.

While women are disproportionately affected by these weapons, they are still denied the agency to participate in decision making processes. This is why WILPF Nigeria is piloting a project to train women at the grassroots level to act as election observers to monitor the upcoming elections. Such monitors will seek to ensure that women are not excluded.

The Importance of a Gender Perspective

Reaching Critical Will Associate Gabriella Irsten spoke on the necessity of strengthening a gender perspective in disarmament and arms control. To understand the true impact of explosive weapons, we need better causality recording that includes gender specific information.

Better causality recording on explosive weapons that includes gender specific data will make visible the toll of explosive weapons on civilians. This data would help us tailor our response in order to help everyone affected by the crises.

Analysing the effects of weapons through a gender perspective can help improve needs assessment efforts, ensure that all people affected by the crisis are taken into equal consideration, and allow for a more appropriate and effective response and prevention measures.

WILPF strongly believes that to mitigate the impact of the use of explosive weapons, we must be able to see the entire picture. It is necessary to campaign for training in gathering segregated data according to sex so that reporting on the civilian impact of explosive weapons contains data on how women are affected. A gender perspective is also necessary to ensure that women are seen as active agents of change rather than simply victims.