The Global Responsibilities of a Feminist Government

The Global Responsibilities of a Feminist Government

Last week, Sweden was scrutinised by the UN Committee on Elimination of Discrimination Against Women (CEDAW) regarding its implementation of the CEDAW Convention. WILPF International and WILPF Sweden (IKFF) have been actively advocating for key issues to be asked by the Committee and have closely monitored the review that took place on 18 February 2016.

Living up to being a feminist government

The Head of the Swedish delegation, Pernilla Baralt, declared in her introductory statement that the rights of women and girls are maybe more important than ever in the world, in particular due to the current conflicts and the rise of extremism. She also stated that Sweden has a feminist government and as such, that it also needs to live up to the expectations that this entails.

The CEDAW Committee experts have recognised and praised Sweden for its record on women’s rights and for its leading role on the global scene as an advocate for the rights of women and girls. However, the experts were not complacent in any manner and have scrutinised and questioned the Swedish delegation in an expert and thorough fashion. In addition, CEDAW expert Ms. Biancamaria Pomeranzi, made an important statement recalling that Sweden bears national responsibility, but also global responsibility with regards to the transnational feminist community. This message is at the heart of WILPF’s advocacy to ensure global accountability and respect for women’s rights by States, not only within their borders, but also extraterritorially. 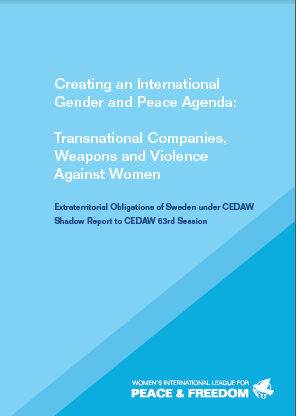 Click on the cover picture to read the report.

We have been very pleased to see several experts from the Committee asking questions about the topics raised in WILPF’s alternative report for the CEDAW review of Sweden. In particular, Ms. Jahan questioned Sweden about its policy and implementation of the gender criterion of the Arms Trade Treaty (ATT) in its authorisations of arms sales overseas. Ms. Jahan also posed a question on the extraterritorial obligations of Sweden and in particular, on whether Sweden has made a gender impact assessment of its new asylum laws and their impacts on women and children, who are particularly impacted by the conflict.

Another expert, Ms. Pomeranzi, raised the issue of women workers’ rights violations in Bangladesh in particular in the textile industries and asked how the Swedish government is tackling this issue. Ms. Pomeranzi also asked whether the Ministry of Labour is included in the Swedish government’s work regarding human rights due diligence of Swedish enterprises. On this topic, Ms. Acosta Vargas also asked Sweden to explain whether Swedish companies operating outside Sweden have any monitoring mechanisms to ensure the evaluation of safety in their whole supply chains.

Finally, Ms. Gladys Acosta Vargas stated that a strong international feminist policy implies living up to UN Security Council Resolution 1325 on Women, Peace and Security and respecting General Recommendation 30 of the CEDAW Committee. The expert asked whether these criteria will be well reflected in Sweden’s upcoming National Action Plan on Women, Peace and Security and asked when the plan will be adopted.

Sweden beats around the bush on key issues

Sweden answered to the experts’ questions above in a very formalistic and legal manner describing the current policies and laws in place, as well as plans for future legislative reforms. However, we found these responses unsatisfactory in so far as they were very general and did not address the substance of the questions.

For instance, regarding the question on arms exports and gender-based violence assessments under the (ATT), Sweden simply indicated its procedural state of play and that legislative work will likely be initiated in 2017 to review the Military Act. However, the Swedish delegation did not explain its current assessments of arms exports, nor its reasoning for the future law. The response thus failed to alleviate our concerns regarding Sweden’s ongoing arms exports to countries in conflict situation and their impacts on women’s safety.

Secondly, on the issue of the impacts of Swedish companies on women’s rights, the lack of clarity and commitment of the Swedish government was even more striking. Sweden just responded that the government adopted a National Action Plan and encourages Swedish companies to establish due diligence processes to prevent human risks. Although the Swedish government indicated that this issue is at the top of their agenda, no specific information on concrete policy or legislative measures was given to tackle this highly problematic issue. We do not believe that corporate voluntary measures, which still seem to be Sweden’s approach, will be sufficient to eliminate safety risks and human rights violations for women workers in textile factories in Bangladesh.