The movers, shakers and peacemakers of WILPF Togo

The movers, shakers and peacemakers of WILPF Togo

The WILPF movement continues to gather pace with the introduction of a new group: WILPF Togo. By taking a multipronged approach and engaging all actors of Togo’s society, the feminist peacebuilders of the group seek to establish a culture of peace in their homeland.

Currently, the factors disturbing this prospect of peace exist in a variety of forms.

Located between Ghana and Benin, Togo’s borders have been described as porous and vulnerable to external influences. In recent years, fears have started to rise about the spillover of violent extremism into Togo from West Africa. Moreover, 60 percent of Togo’s population of 7.18 million people live in rural areas. Of the rural population, some 70 percent live in poverty and the access to secondary and tertiary education is sparse. The brunt of this burden disproportionately falls on women and other marginalised persons of society, including children and youth.

These are exactly what WILPF Togo sees as the “root causes of violence, terrorism and extremism,” tells Bassiratou Idrissou-Traoré, the group’s President. While the image may seem bleak, it should not be considered separate to the positive forces such as these 10 members (and counting!) ready to drive change.

The WILPF Togo group came to life through networks of women united in their ambition for peace. Bassiratou shared with us her perspective into how the group found its footing.

At a workshop for peacebuilding, Bassiratou happened to strike up conversation with Feu Botre. He was working as part of the UN Regional Centre for Disarmament and Peace, and had come across WILPF through Sylvie Ndongmo, the President of WILPF Cameroon. Ideas quickly set into motion and one month later, Bassiratou was in contact with Sylvie as well as Régina Ouattara, the President of the WILPF Burkina Faso group. Hearing the inspiring stories of women’s peacebuilding efforts through WILPF Sections across the continent, Bassiratou was set in her determination that a similar initiative could be started in Togo.

Next, Bassiratou recalls a “breathless” process, with constant back and forth between herself, the WILPF International Secretariat and women encouraging her along the way. She met on several occasions with women across Togo who were already working on the theme of peace, security and UN Security Council resolution 1325.

It turned out Bassiratou was not the only one with the idea – Pilakani Chantal Faya had previously been in touch with WILPF to inquire about setting up a group in May of the same year. The two women met on 13 August 2019, and spent hours discussing their shared passion for peace. Bassiratou remembers this fondly, a meeting of kindred spirits.

Not more than a few weeks later, WILPF Togo was born. The group now comprises women from all across Togo, including the Savanes, Maritime, Kara and central regions. And as for the Plateaux region, Bassiratou says that registration slips have been sent out and the group is waiting for their return. This will be a group to represent all women of Togo, not just the few.

Setting up WILPF Togo was only the start … the group’s members are now thinking about what steps to take towards the future. Their vision is that of a Togo where communities live together in harmony and approach their differences with compassion and tolerance. This is befitting a country with some 40 ethnic groups and a population slowly approaching 8 million people.

Where conflicts may occur, WILPF Togo’s peacebuilders seek to establish an early-warning mechanism for their detection. To do so will require consistent dialogue between “state, non-state and grassroots actors and communities,” Bassiratou recognises. In the prevention, management and regulation of conflicts broadly, the group will advocate for women’s crucial role to play in each element. This is essential to eradicating violence in all its forms and entrenching the peaceful conditions necessary for development – an understanding WILPF has stood for since its inception.

Thinking of the various groups in Togolese society, Bassiratou states that the most vulnerable are too readily being lured into the “webs of extremist violence.” The rise in radicalised youth and women comes as an unfortunate by-product of the widespread nature of poverty and lack of opportunities for those without access to education. WILPF Togo wants to address the issue in practice by finding means for women and young people to achieve financial independence and tending to the needs of abandoned orphans. 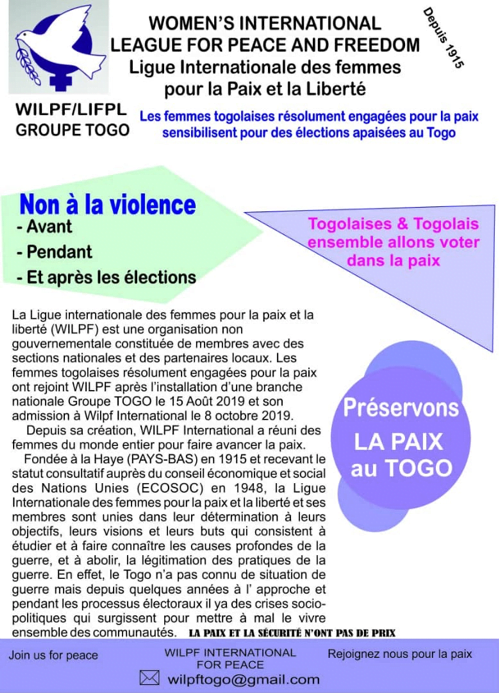 The concerns of the group presently are the elections which are due to take place on 22 February 2020. In the past, the election period has stirred troubles, with post-electoral disputes and outbreaks of violence. These moments of turbulence should not be taken lightly. They have damaging impacts on “national cohesion and the ability to live together as peaceful citizens,” posing risks to the development of Togo.

Bassiratou states that it is important to not lose sight of how security challenges in Togo’s neighbouring countries – including violent extremism, deadly attacks and abuse by armed jihadist groups – have made the lives of populations uneasy. “We don’t want to go through hell and deadly heartbreak at home,” she says.

But members of WILPF Togo have come prepared. They have gone from schools to mosques to remind people of the virtues of peace, tolerance and non-violence. Standing next to traffic lights and waiting for a red light, you can find Togo’s feminist peacebuilders passing flyers of peace to anyone willing to give them a chance.

While the avenues that the WILPF Togo Group embarks on remain to be seen, these first steps are already positive indications of a bright future to come. Here’s to a very warm welcome to our new members of the WILPF community!

If you are keen to get in touch with our feminist peacebuilders in Togo, you can say hello by emailing wilpftogo (a) gmail.com. We wish to thank Bassiratou Idrissou-Traoré for helping us to write this piece.

Inspired by this story? Thinking of starting a WILPF Section in your country? Find out more on how to do so on our website.