The Women of Syria Advocating for Peace

The Women of Syria Advocating for Peace

The Ending Sexual Violence in Conflict Summit that took place in London Between 10 – 13 June 2014 was a great platform for international NGOs and grassroots women organisations to show the impact of sexual violence on civilians and discuss the programmes they are leading to combat this impact.

In Syria, the impact of ongoing violence on women goes beyond the direct victims to affect all women in the society. Whether living inside or outside Syria, women are losing their basic rights and hard-earned status due to the continuous violence.

WILPF invited 6 Syrian women to share their experiences on how the ongoing violence affected their lives and status and what they are doing on the local and international levels to limit this affect. 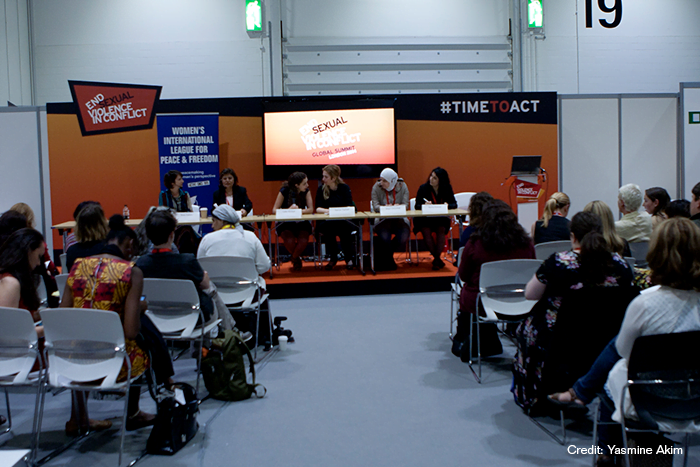 The panel of Syrian women

Sema Nassar a researcher at the Women’s Rights Division in the Euro-Mediterranean Human rights Network shared the findings of her report “Bleeding Wound in the Syrian Conflict”. Sema explained the patterns of sexual violations and stressed the need for accountability of perpetrators, she also highlighted the difficulties faced by activists to document sexual violence inside and outside Syria and the need for raising capacity on documentation and ensuring access to affected areas.

That was emphasised by Rola Hallam who has been visiting Syria regularly to provide health aid as a volunteer physician for Hand in Hand for Syria. Rola spoke about the horrors facing women and children in Syria and advocated the need for immediate delivery of humanitarian and medical aid inside Syria. 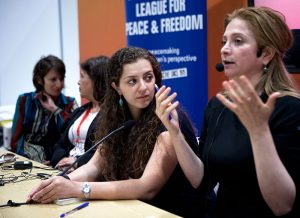 Samar Yazbek: a Syrian writer and journalist shared her observations during the several visits she made to the most affected areas in the north of Syria. Samar highlighted the great efforts made by women grassroots organisations for peace, and how that motivated her to launch Souriyat for Development organisation in 2012 aiming to empower Syrian women economically and socially. The organisation currently runs 4 centres, with the objective to empower women in Lebanon, Turkey and Damascus Suburb and aims to open more centres inside Syria and in neighbouring counties.

An influential statement about the importance of non-violence was made by Majed Chourbaji, a non-violent activist who was arbitrarily detained by the Assad forces and later left to Lebanon where she cofounded “Women Now” centre that helps raising capacity of Syrian refugee women in Lebanon.

“I was nonviolent when the uprising started, remained nonviolent when I was arbitrarily detained by the Asad forces, and still believe in nonviolence now after I had to flee the country”

Sabah Hallak, a board member of the Syrian Women’s League spoke about the efforts made by members of the Syrian Women’s initiative for Peace and Democracy to ensure the inclusion of women in all levels of negotiations and peaceful transition.  Sabah also spoke about the great efforts by Syrian women in international advocacy and lobbying, including the recent shadow report that will be presented to the CEDAW committee in July.

“Syrian women of all backgrounds sat and agreed on the need to stop violence and hold all perpetrators accountable, those are the ones who will change the dynamics of the Syrian conflict and should be supported” 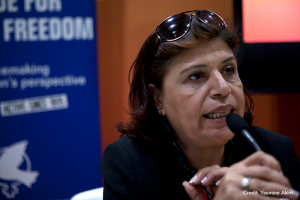 Laila Alodaat, a Human rights lawyer and the MENA associate at WILPF moderated the session and spoke about the failure of the rule of law and the systematic use of the legal system as a tool of repression. Laila explained the impact of this failure on women who face a new spectrum of violations while they completely lost their access to justice.

The Syrian women presented a great example of proactive individuals and groups who oppose the weak and victimised stereotype, they showed how they can positively contribute to the peaceful transition in Syria and contribute to a democratic society that is free from violence and human rights violations.