This Week, We Start to Ban the Bomb

This Week, We Start to Ban the Bomb

Today at the United Nations, history is being made. The majority of governments, together with international organisations and civil society groups including WILPF, are gathering to start negotiations of a treaty banning nuclear weapons.

It took incredible amounts of determination, creativity, and courage to get here. We have seen decades of activism against the bomb. Endless engagement with nuclear-armed states. The collection of baby teeth. Millions of people marching in the streets. Commitments made and broken. Pleas from survivors of nuclear weapons use and testing. Many, many conversations in various UN forums. Countless UN resolutions. Multiple joint statements. Three humanitarian impact conferences. Two open-ended working groups. One Humanitarian Pledge. And then, the adoption of an historic resolution in the UN General Assembly last October.

One of the most spectacular things about this is that we are doing it without the nuclear-armed states, and without other states that include nuclear weapons in their security doctrines. These states—the minority—are refusing to participate in the UN talks and have condemned the negotiation of this treaty as destabilising for the status quo. But this is exactly the point. 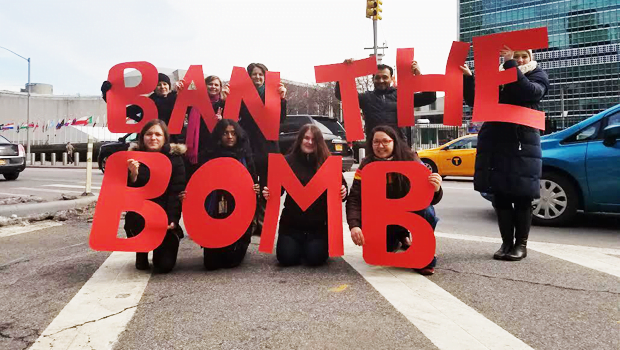 Smashing the patriarchy by banning the bomb

This process of banning nuclear weapons is a direct challenge to the patriarchal world order and patriarchal discourse.

Right now, nine states possess nuclear weapons. The rich (mostly white, northern) countries of the North Atlantic Treaty Organisation (NATO) as well as Australia, Japan, and South Korea, include nuclear weapons in the security doctrines. They mounted a firm opposition to the development of this treaty. They have hurled vitriol at governments and NGOs championing this process. They have ordered allies not to attend. They have accused us of undermining existing international law. They have even suggested these negotiations might lead to the use of nuclear weapons—presumably out of spite.

Much of the opposition to the nuclear ban process has been highly gendered. Those talking about humanitarian consequences of nuclear weapons and calling for the prohibition of these weapons of mass destruction are accused of being divisive, polarising, ignorant and even emotional. Opponents to the ban say that they support “reasonable”, “realistic”, “practical” or “pragmatic” steps, and that anything else is irrational and irresponsible.

Most women and others will recognise this rhetorical assault. When men want to assert their power and dominance and make women (or other men) feel small and marginalised, they accuse us of being emotional, overwrought, relentless, repetitive or irrational. This technique has been employed for as long as gender hierarchies have existed.

This is also generally reflective of the traditional nuclear weapon discourse, which is full of terms with gendered meanings. That discourse continues to be mired in dichotomies such as hard versus soft security, strong versus weak, active versus passive and national security versus human security. With remarkable consistency, the masculine-identified sides of these pairs are tacitly attributed more value than the other.

Nuclear weapons are themselves loaded with symbolism—of potency, protection and the power to “deter” through material “strength”. For many, such symbolism obscures the real point of the existence of these arms—to destroy—and their horrendous effects. Taking a human-focused approach to disarmament and challenging a state-centered approach to international peace and security are good first steps. An understanding of the gendered meanings and characterisations embedded in the discourse and politics of nuclear weapons will support that process.

Despite all of this, there is an acute lack of gender diversity in disarmament talks. There is a disparity in the level and volume of participation of women, men, and others in disarmament and arms control discussions, negotiations, and processes. Recent research has shown that at any given intergovernmental meeting on disarmament, only about one quarter of participants are likely to be women and almost half of all delegations are likely to be composed entirely of men.

Thus the prohibition of nuclear weapons is something women’s groups should be able to celebrate. Women have been at the forefront of the anti-nuclear resistance since the beginning of the nuclear age. WILPF was one of the first civil society groups to condemn the bombings of Hiroshima and Nagasaki. Women were leaders in the campaign to ban nuclear weapon testing in the United States, including by collecting baby teeth to show evidence of radioactive contamination. Women led the Nuclear Freeze movement in the 1980s, calling on the Soviet Union and United States to stop the arms race. Now, women are the leading edge of the movement to ban nuclear weapons. In both governments and NGOs, women have been the most present and vocal in campaigning for a total prohibition of the bomb.

Next week and in June-July, when the negotiations at the UN will continue, women will continue to be in the forefront of the resistance against the bomb. We are leading both in the conference room and in the streets. As part of our efforts to ban nuclear weapons, WILPF is organising a public march and rally on 17 June 2017, during the midst of the second round of negotiations, to bring together an intersectional, diverse and inclusive group of people who want to see the end of the nuclear era!

You can join our Women’s March to Ban the Bomb in New York City or set up a sister march in your city and become a partner of our initiative. It’s going to be a great time to mobilise against nuclear weapons and for human security!

Hard work is still ahead of us, of course, to achieve an international instrument that prohibits nuclear weapons. Inside the UN, we must now move to details and decisions. We are tasked with developing a strong treaty that stigmatises and categorically prohibits the most dangerous weapon ever created in order to facilitate actual change in the policies and practices of states that have so far perpetuated global injustice and the spectre of mass extinction by supporting nuclear weapons.

While it may seem daunting, fulfilling this task is fully within our means. In theory, it is an obvious thing to ban something so abhorrent. We have banned chemical and biological weapons, landmines and cluster munitions, and we even preemptively banned blinding laser weapons. We did this even without the support of users and producers of some of these weapons. We are motivated by the catastrophic humanitarian consequences of nuclear weapons, the risk of their use, and the deplorable waste of resources currently being sunk into the on-going arms race. We understand the global injustice these weapons represent, and we are morally, ethically, and legally compelled to categorically prohibit these weapons of mass destruction once and for all.

Civil society groups with the International Campaign to Abolish Nuclear Weapons (ICAN), which is largely responsible for shepherding this process alongside governments, have some ideas of what states should consider. ICAN has put out four briefing papers for governments to consider ahead of negotiations. WILPF, which is a member of the campaign’s international steering group, put out a longer discussion paper on the principles and elements of a nuclear weapon ban treaty. It looks concretely at how this instrument could build on existing norms and reinforce existing legal instruments but also strengthen the rejection and stigmatisation of these weapons.

The treaty banning nuclear weapons is born of humanitarian and environmental concerns. Its principles, objectives, prohibitions, and positive obligations will need to reflect this. This is an opportunity for governments that reject nuclear weapons to change the way nuclear weapons are treated in law, politics, economics, and in the eye of the public. Thus above all else, it is imperative that this treaty makes all aspects of the possession, use, threat of use, or preparation for use of nuclear weapons categorically illegal, without exception, in order to help propel us towards a nuclear weapon free world.

It is a moment to celebrate, and we must throw our determination and creativity now into developing the strongest ban treaty possible. It’s an exciting time and the world is ready! Let’s ban the bomb.
Negotiations will be on at the UN from 27-31 March 2017 and 15 June-7 July 2017. To follow the negotiations, you can subscribe to WILPF’s ban treaty mailing list to receive daily updates from our disarmament programme Reaching Critical Will. You can also follow us on social media with the hashtag #nuclearban and the Twitter accounts @RCW_ and @nuclearban.