When Home Is Not the Safest Place – Where Should Women Go?

When Home Is Not the Safest Place – Where Should Women Go? 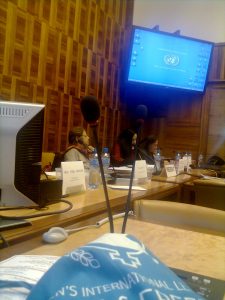 That was the question rhetorically asked by Permanent Representative of WILPF to the United Nations Dr Krishna Ahooja-Patel at the side event of Protecting and Promoting Women’s Rights.

The conference took place at the United Nations Office in Geneva. Organised by the International Council for Human Rights (ICHR) and the International Human Rights Association of American Minorities (IHRAAM), this full-day side event included speakers from all over the world, from as far as Hong Kong and as near as Geneva. And it was not only filled with the presence of women, but a significant number of males attended as well.

Aiming to address women’s human rights in conflict areas, the conference was comprehensive in the topics covered, with specific focus on areas with particular urgent attention such as Kashmir and India, and shedding light on secluded minority groups such as the aboriginal peoples of Canada as well as members from the Kenaitze Indian Tribe in the United States.

The conference aimed to suggest measures and policies for protecting women’s human rights in conflict areas. Similarly interesting, it focused on the role of the media as a growing culture in depicting the hidden and acting as evidence of crime.

It is not a new phenomenon- but the rising trend of women’s insecurity in the household, in the streets and in the work place raises the theme question of the conference: where should women go?

For example, a few weeks ago in India two women were raped when hailing a rickshaw in a popular shopping centre in their hometown, not to mention the heinous crime of the rape of a 23-year old girl in December 2012 resulting in her tragic death. In Kashmir rebel groups are using rape as a weapon in wartime. The outcome is that girls grow up with a feeling that they are a ‘burden’ and many families opt for the easiest solution of giving them up for early marriage, only for them to become victims of another family.

Through the discussion Professor Frances Heidensohn from London School of Economics answered humorously by stating that it is not a question of where women should go but rather “ask the men to stay home”!

But it was suggested and agreed by most panellists that to avoid sexual assault and violence against women  more female staff are needed in law enforcement institutions, more police patrols are also required especially in far-off areas; and that research should be conducted through feminist approach.

In the case of indigenous groups and minorities elsewhere the respective governments have a vital role in protecting their neglected citizens and interventions are needed to rectify the human rights violations against women and children in these areas.

The outcome of the conference was positive, not only because the next day was International Women’s day, but according to Chief of Women’s Rights and Gender Section Office of the UNHCR Ms. Isha Dyfan, “women are now being heard”.