Yesterday morning, the headlines on my computer read ‘Kerry Makes Statement on Syria’, flashing breaking news across my screen. It was the news U.S. Secretary of State John Kerry confirmed the use of chemical weapons in Syria on a large scale, calling the indiscriminate slaughter of civilians by chemical weapons a moral obscenity. The speech is believed by many to be a signal the U.S. is readying itself to take action in Syria. 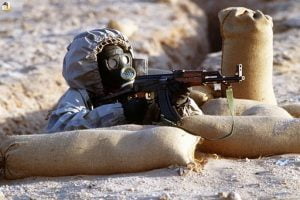 Specifically, Kerry said: “This is about the large-scale indiscriminate use of weapons that the civilised world long ago has decided should never be used at all. A conviction shared, even by countries that agree on little else. There is a clear reason why the world has banned entirely the use of chemical weapons. There is a reason why the international community has set a clear standard. There is a reason why no matter what you believe about Syria, all peoples and all nations who believe in the cause of our common humanity, must stand up to assure there is accountability for the use of chemical weapons so that it never happens again”.

One way in which we can see why this is important is our recent work on explosive weapons. Since 2012, WILPF has been a member of the International Network on Explosive Weapons (INEW), which calls for immediate action to prevent human suffering from the use of explosive weapons in populated areas.

‘Explosive weapons use blast and fragmentation to kill and injure people in the area where they detonate, as well as to damage objects, buildings and infrastructure. When used in populated areas, they tend to cause high levels of harm to individuals and communities. Destruction of infrastructure vital to the civilian population, including water and sanitation, housing, schools and hospitals, results in a pattern of wider, long term suffering. Victims and survivors of explosive weapons can face long-term challenges of disability, psychological harm, and social and economic exclusion. Media monitoring by Action on Armed Violence has identified the use of explosive weapons in populated areas in 73 countries and territories between October 2010 and May 2011. Of the 13,400 people killed and injured in those incidents, approximately 87% were civilians.’

WILPF is contributing to this network by producing a paper on the effects of explosive weapons on women, as approaching peace and security from a gender perspective is our expertise. As relatively little has been written on this subject so far, we wanted to make a preliminary analysis of the issue by highlighting the stories of women who have been directly impacted by explosive weapons. 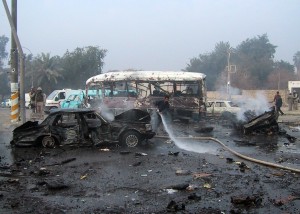 The aftermath of a car bomb in 2004 in Baghdad, Iraq. Flickr/ James Gordon

Given the lack of research on this topic, we decided to conduct three interviews ourselves, with women from Nigeria, Bosnia and Iraq, and collected interviews with women in Syria, conducted by other non-governmental organisations.

In these interviews, the women gave us insights on what type of effects explosive weapons have on their daily lives, a subject previously largely unexplored. In describing their experiences, they covered everything from fighting back against constant fear and insecurity, their feelings of disempowerment and helplessness when seeing a picture of themselves in the local media where they were merely described as ‘a victim’, to the fact that local committees set up to combat such violence had no women on them.

Based on these interviews, the paper will analyse the devastating effects on women’s lives and livelihoods explosive weapons in populated areas can have. Covering issues such as forced displacements, risks of being exposed to sexual and gender-based violence, the erosion of social capital and the destruction of basic infrastructure, we will try to come to an understanding in what different ways women are affected: as victims, survivors, and often as single heads of households.

We hope to publish this paper featuring the stories of these women before an upcoming experts meeting on the use of explosive weapons organised by the United Nations Office for the Coordination of Humanitarian Affairs and Chatham House. In this way, we aim to contribute to setting international norms against explosive weapons that violate the common humanity of us all.