WILPF and MADRE Presents: A Conversation With Radhika Coomaraswamy

WILPF and MADRE Presents: A Conversation With Radhika Coomaraswamy

Following the official launch of the Global Study on the implementation of UNSCR 1325, WILPF’s Women, Peace and Security programme, PeaceWomen, in collaboration with MADRE, and the Sorensen Center held a conversation with Radhika Coomaraswamy, independent lead author of the Global Study, moderated by Madeleine Rees, Secretary General of WILPF. 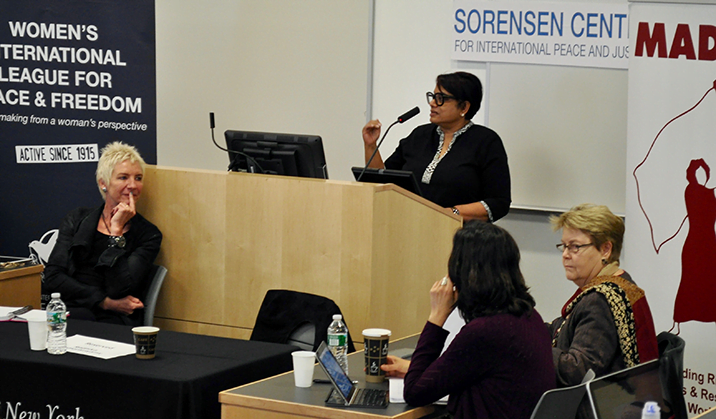 Radhika Coomaraswamy is speaking at the event, while Madeleine Rees, Yifat Susskind, and Charlotte Bunch are listening. Photo: PeaceWomen

The panel discussion sought to both celebrate the successes of the Global Study, and progress made within the Women, Peace and Security (WPS) Agenda as well as to strategise on next steps within the Agenda that will mobilise commitments into action.

Panelists and attendees all praised the success of the Global Study in increasing discourse and raising awareness about WPS. However, many present expressed concern about the changing nature of the WPS agenda at the United Nations, primarily the increasing linkage between WPS and counter-terrorism as well as shrinking civil society space.

Those present agreed that there is a need to shift back to pushing for a transformative agenda that affects real change. For example, Nobel Peace Prize Laureate Leymah Gbowee addressed the issue of women’s participation in peace talks. There has been an increase in women present at the peace table over the past 15 years, but they are often mere observers rather than full participants. Governments need to be held accountable to ensure women’s full and effective participation.

Another takeaway from the discussion was that the WPS Agenda would fail unless results are seen at a country level. There are significantly more references to women in Security Council Resolutions than in 2000 when UNSCR 1325 was implemented, but this has not necessarily translated to increases in safety and economic empowerment on the ground.

The Women, Peace, and Security Agenda has had many successes over the past 15 years, however, the framing of the WPS agenda and the approach of those pushing for it will have to evolve in order to maintain this success. The launch of the Global Study was a historic opportunity for WPS and hopefully this momentum will carry WPS forward for another fifteen years.