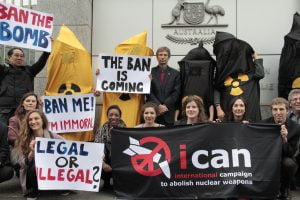 The UN Open-Ended Working Group taking forward multilateral nuclear disarmament negotiations (OEWG) concluded last Friday 13 May with a clear majority of states supporting a ban on nuclear weapons as the next step.

WILPF’s disarmament programme, Reaching Critical Will participated in the May session of the OEWG and published a daily report, which you can read here.

More than 80 states participated in the meeting and the discussions were clearly dominated by talk of a nuclear weapons ban. The nine nuclear-armed states chose not to participate.

The Community of Latin American and Caribbean States submitted a working paper calling for states to begin negotiations on a legally binding instrument to prohibit nuclear weapons.

States that rely on nuclear weapons in their national security postures repeated their support for the so-called “progressive approach” and emphasised the need to include the nuclear-armed states in negotiations.

More statements and documents from the May session can be found on the RCW website.