WILPF Colombia, or LIMPAL Colombia in Spanish, celebrates 20 years as a WILPF Section on 8 November 2018. During two decades, the Section has continuously promoted women’s rights in a country destabilised by violent internal conflict. Sections’ members will gather for this special day and launch dedicated material about peace movement in Colombia.

Since 1964, Colombian people and women have faced 54 years of civil war and armed conflict between government forces, leftists guerilla groups and right wing parliamentarians. The conflict formally ended in November 2017.

The consequences of the conflict often most severely affected women and girls, and today the gender-specific impact on women makes it important for Colombian women to advocate for and be included in disarmament initiatives.

Within this context LIMPAL Colombia works as a social movement. The Section is committed to build a fair and inclusive Colombian society through the promotion and defence of human rights. Under these conditions only women’s empowerment and gender justice are possible. 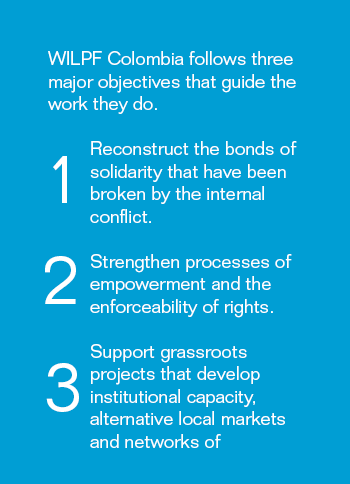 Striving Towards Peace and Disarmament

A long history of armed conflict has made the work of peace organisations incredibly vital in Colombia. “When the opportunity of the Peace Agreement appeared, there was already a women’s movement that was against the war and had worked for peace for a long time” says Katherine Ronderos, director of LIMPAL Colombia.

Together with other organisations and women activists, LIMPAL Colombia strives to eradicate poverty and work for social justice. Examples of their crucial work over the past 20 years include political advocacy, gender justice, economic justice and institutional development.

One of the biggest achievement is their involvement in the 2016 peace accords between the government and the Revolutionary Armed Forces of Colombia – People’s Army (FARC-EP). They have ensured the political participation of women in the implementation phase of the accords and advocated to include a gender perspective in the discussions. 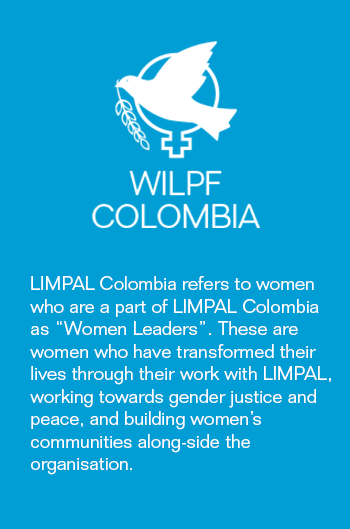 In preparation for the anniversary, LIMPAL Colombia has met and interviewed Colombian women leaders, whom they work closely with. This has resulted in a photo exhibition and podcast series, where the women leaders talk about their experiences living within the context of conflict, and how working with LIMPAL Colombia has enabled them to become leaders and activists in their communities.

“Our aim was to tell the history of LIMPAL through the voices of the different women who took part in our projects,” said Emilia Morales of LIMPAL Colombia, “Many of these women have been working with us for a long time, but they never had the opportunity to share their testimonies on how they feel and what it means for them to work with our organisation. We wanted to give them this opportunity since they represent the target of our organisation.”

These stories will be projected at the anniversary cocktail on the evening of 8 November. Three of these interviews are already available below, with English subtitles for non Spanish speakers.

Sara Matilde talks about what disarmament means to her and how she supports her community in many different ways:

Adriana Rodas empowers women that have been a victim of gender-based violence:

On 8 November, LIMPAL Colombia is holding a forum today and is launching a report carried out with the FARC-EP.

The report analyses how ex-combatant women can reintegrate into civilian life after more than 50 years of civil war in the country. It investigates the implementation process of the Peace Agreement, and includes several highlights on the experiences of the women who participated in the peace agreement reintegration meetings, spaces intended to aid the reintegration of ex-combatants.

The report features testimonies of ex-combatant women, which reflect their commitment to building peace without arms, and to change social and economic inequality through their collective work.

One of these women, an ex-combatant from Agua Bonita (Caquetá) expresses her desire for peace, saying, “We continue with our heads held high because we don’t want to be involved in the war anymore and we’re showing the Colombian people that what we want is for the war to end. We’re ready and waiting for the dawn so we can work the land.”

The report “Fighting for the Dignified Reincorporation of Women: A follow-up report on Resolution 1325 with recommendations for reincorporation processes” will be available on LIMPAL Colombia website: http://www.limpalcolombia.org