Every year on the 21st of September, WILPF Costa Rica celebrates International Day of Peace by participating in Costa Rica’s Peace Festival.  Organized by the Peace Network and sponsored by Costa Rica’s Ministry of Justice and Peace, this festival promotes peace by hosting folk dances, songs, and various other activities for Costa Rica’s children.  Located in San José’s Plaza de la Cultura, organizations such as WILPF host booths designed to educate and engage children on the issue of peace. 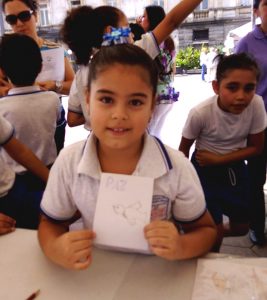 Schoolgirl with picture of peace from WILPF booth at the Peace Festival in San José, Costa Rica.

This year, WILPF Costa Rica helped children articulate peace by having them draw pictures of what peace meant to them. Mitzi Stark, a member of WILPF Costa Rica, wrote that that a class of children came and made, “drawings of all kinds, some simple, some artistic, some very clever and all done with thought.” The children’s pictures ranged from the familiar to the abstract, with drawings of family members and pet cats to trashcans full of guns.

Once a child finished his or her drawing, WILPF members stored the picture under a plastic cover on top of the table to help inspire other children.  Even though heavy rain ended the day early, sixty-two boys and girls made pictures for WILPF’s Drawing for Peace project. In addition to organizing this project, WILPF members handed out both literature on WILPF and colouring books on a culture of peace.

WILPF Costa Rica also advocated for peace this International Peace Day by encouraging women leaders to join the organization as future peace activists. Mireya Gonzalez represented WILPF Heredia, a chapter of WILPF, at a meeting that included 90 women activists and leaders. In an effort to inspire potential new members to join WILPF as advocates for peace, Ms. Gonzalez spoke of the organization’s goals and activities.

Feel free to share what your section did to celebrate this day of peace, below! This International Day of Peace, the International President of WILPF, Adilia Caravaca, also wanted know, “What does it mean for you to be a peace builder?” Read the responses of peace activists on our Facebook page.