The 35th regular session of the Human Rights Council (HRC) took place from 6 to 23 June 2017. At this session, we centered our advocacy activities on the gendered impacts of: the armed conflict in Syria; austerity measures in Ukraine; the Israeli occupation of Palestinian territory; arms transfers; and corporate abuse. We also joined a statement on Shrinking Space for Civil Society Space delivered by the International Commission of Jurists drawing attention to the now virtual absence of seats in the HRC plenary room reserved for NGOs.

The following are some of the highlights of our activities and of the relevant HRC outcomes in our priority areas.

On 14 June, the Human Rights Council held an interactive dialogue with the Commission of Inquiry on the Syrian Arab Republic (CoI). On this occasion, WILPF delivered a Statement on Weapons Transfers to Syria and Their Impact on Women underlining the disproportionate impacts of explosive weapons on women, supporting the CoI’s repeated calls to curb the proliferation and supply of weapons to warring parties, and urging the Council to act on those calls.

On 21 June, during the interactive dialogue on Ukraine, we made a Statement on the Upcoming UPR of Ukraine  recommending that states use the opportunity of the upcoming Universal Periodic Review (UPR) of Ukraine to make recommendations aimed to address the disproportionate impact on women of austerity measures linked to conditionalities by the International Monetary Fund (IMF). This statement reiterated the concerns we raised in: a joint submission on the Effects of Intervention by International Financial Institutions on Women’s Human Rights in Ukraine to the CEDAW Committee, a joint submission on the Obstacles to Women’s Meaningful Participation in Peace Efforts in Ukraine for the UPR of Ukraine, a written statement on Ukraine – the Impact of Interventions by International Financial Institutions on Women to HRC35, and an oral statement on the Effects of Intervention by the IMF on Women in Ukraine to the Council in March. Ensuring the respect, protection, and fulfillment of women’s economic and social rights in Ukraine is a crucial end in itself but is also vital to enable their participation in the peace process and post-conflict reconstruction efforts in Ukraine, in line with UN Security Council resolution 1325 and subsequent related resolutions

Violence against Women: The Case of Palestinian Women under Occupation

In conjunction with the presentation to the HRC of the Special Rapporteur on violence against women’s reports on her missions to Israel and Palestine, WILPF held a side event on the specific impacts of the occupation on women. This event was co-organised with the Women’s Centre for Legal Aid and Counselling (WCLAC), Community Action Center- Al-Quds University and The Palestinian Center for Development and Media Freedoms (MADA). The panelists underlined the impact on women of property destruction, demolition, and the lack of quality housing; targeting of civilians and punitive measures (including night raids and restriction on movement in West Bank); expansion of settlements and settler violence; forcible transfer of Palestinians from East Jerusalem, residency revocations and forcible transfer as a form of collective punishment; targeting of women human rights defenders and journalists. These are issues that have been elaborated further in a joint submission for the upcoming UPR of Israel, which will be available on WILPF’s website in English and Arabic in September.

At this HRC session, the High Commissioner for Human Rights and the Special Rapporteur on extrajudicial, summary or arbitrary executions presented their respective reports, Impact of arms transfers on the enjoyment of human rights and a gender-sensitive approach to arbitrary killings, both recommending more stringent regulation of arms sales to prevent human rights violations. For an overview of the content of these two reports and about WILPF’s contribution to them, read the following article.

On 6 June, we made a statement on Continued Scrutiny of the Gendered Impact of Arms Proliferation Is Needed in the interactive dialogue with the Independent Expert on protection against violence and discrimination based on sexual orientation and gender identity and the Special Rapporteur on extrajudicial, summary or arbitrary executions. In that statement, among other things, we called on states to implement the recommendations by the Special Rapporteur on extrajudicial, summary or arbitrary executions for increased research on the gendered effects of the use of explosive weapons in populated areas, and support to international efforts to develop a political commitment to end such use. In an oral statement on Human Rights Concerns Must Come Ahead of Profit in the Arms Trade made on 14 June, we welcomed the OHCHR report and highlighted the particular significance of the recognition in it of the impacts of the arms trade on gender-based violence against women[1]. In praising the Human Rights Council’s increasing attention to human rights violations linked to arms transfers, we urged it to fulfill its mandate to prevent human rights violations and to act on the recommendations in the OHCHR report. In particular, the HRC should recommend that states conduct rigorous and transparent gender risk assessments prior to any authorisation of arms sales or transfers and deny such authorisation when there is a risk that they would be used to commit or facilitate acts of gender based violence, in accordance with provisions of the Arms Trade Treaty. 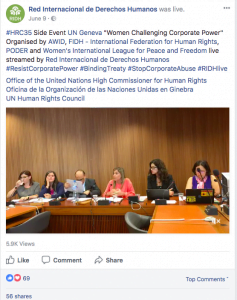 The side event “Women Challenging Corporate Power” was live streamed. You can click on the picture to watch it.

WILPF is a member of the Treaty Alliance, a global civil society alliance calling for a treaty on transnational corporations and other business enterprises and human rights. As part of this process, WILPF has been advocating for a gender perspective to be reflected in the treaty and for the experiences of affected women to be reflected fully in the treaty drafting process.

WILPF co-organised a side event with Association for Women Rights in Development (AWID), International Federation for Human Rights (FIDH) and Project on Organizing, Development, Education, and Research (PODER) on 9 June. Discussions in the side event focused on presenting a feminist analysis of corporate human rights abuses and the panelists discussed how to make the treaty meaningful and accessible to communities, in particular to women.

What Else Happened at the Council at Its 35th Regular Session?