On 10 September 2016, WILPF held our main event at the AWID Forum, entitled ‘Feminist Playbook for Peace‘, one of four major sessions aimed at spotlighting opportunities for cross-movement engagement and building collaborative action.

Where are We Now? Toward Rebuilding a Splintering House for All

MADRE Executive Director, Yifat Susskind, introduced the session by asking participants to build on successful strategies for alternative #FeministFutures across movements – such as the LGBTQ movement – to create change: not just among nation states, but in hearts and minds.

Susskind invited participants to think about our current world as a house that protects some and leaves others out. The house can be understood as our current institutions, especially neoliberalism and the nation state. However, today, cracks are showing. Within this context, Susskind asked: “How do we repurpose our strategies?”

Context: From Militarism and Exploitation to Gender Justice and Peace

At the WILPF 100th summit, activists analysed root causes of war and violence, and called for action to address these root causes for sustainable peace and gender justice. This included analysing gendered power in our world, how militarised economies of violence and war based on violent masculinities create economies of war rather than peace, and how feminist movement building is critical to overturn patriarchy, racism, and corporate power.

“We must reject the assumption by our governments that they have our consent for violence and hold them accountable,” stated Alodaat. “We are committed to rejecting the heroism of war, and recognising the heroism of peace.”

Knowledge is with Everyone: Engaging Diverse Actors for Transformative Change 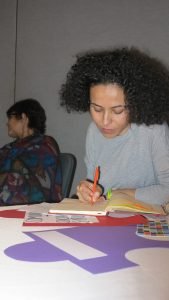 After introductory context, participants broke up into discussion groups around key actors and institutions that must be addressed to realise feminist futures for peace. Participants were invited to explore trends, work needed, and cross-movements opportunities in each group.

Recognising that we all carry knowledge and expertise, they then were invited to report back and discuss together how different engagement strategies with different actors could be put together like different puzzle pieces to strengthen synergies across movements for transformation and sustainable peace, freedom and justice.

“Militarisation is an expression of patriarchy.” – Katherine Ronderos, WILPF-Colombia

“Women have devised strategies for confronting militarisation and armed actors. For example in India, women have stripped and protested rape and killing, took a pledge to honour our women, and submitted India’s first feminist political party to ensure women’s human rights and peace.” – Binalakshmi Nepram, Control Arms Foundation of India

“We must identify actors and their role, and lead our countries to sign and ratify the Arms Trade Treaty and engage women in negotiations about peace.” – Annie Matundu Mbambi, WILPF-DRC 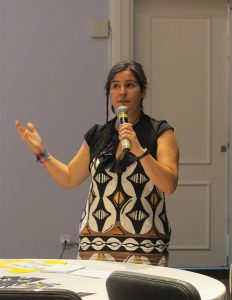 “There has been a hostile take-over of the state: a rise of corporate power and a reduction of state power to provide women’s human security through militarized and exploitative growth that puts profit over people and planet.” – Abigail Ruane, WILPF / PeaceWomen

“We need to give back the power to the people and to agencies that represent people, perhaps through a global strike. There needs to be a new system where we move the money from military to social expenditures so we can cultivate happiness and listen to our indigenous sisters in protecting mother earth.” – Maria Munoz, WILPF/ Human Rights

“In Africa, there is extractivism and exploitation of natural resources, and economic structures that do not favour the environment. We have to go to the field, go to people without internet, and report this on and offline, and make companies responsible.” – Bexi Cruz, WILPF-Colombia

“Let us help women break the silence: help them have the power to solve their own solutions.” – Amalkher Djibrine, WILPF-Chad

“The answer is in the room: women are able to find their own local strategies that lead to peace, prevent conflict, and find solutions to current problems. All that is needed is to support the women who are already doing the work.” – Oula Ramadan, Badael Foundation 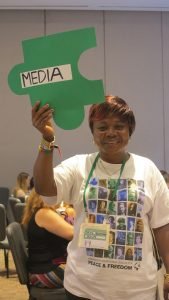 “Media production is driven by men and male gaze. We need media and stories led and produced by grassroots women, where women can tell their own stories, in their own words, about what it means to be a woman or man in terms of power and influence. We need to strengthen funding for culture change, and use the power of storytelling to change hearts and minds.” – Jamie Dobie, Peace is Loud

“There are men who are identified as advancing the rights of women, but they have refused to be called feminists, because of the misconception of what feminism is.” – Chioma Okezie, WILPF-Nigeria

“We need to build idea of men being allies to the feminist movement. Need different strategies for working with men from local community to UN standpoints.” – Marcos Nascimento Promundo, Brazil

“We must give media the correct tools to engage boys and men, in order to understand, respect, and align their rights to women’s rights.” – Annie Matundu Mbambi, WILPF-DRC

Putting the Puzzle Together

WILPF Secretary General Madeleine Rees reflected on how we synergise our strategies among actors for transformative change. “The only way of getting the revolution to happen is for each person to look up,” she stated. “We need to look up and keep our linkages to ensure we are going in the same direction.”

“If we put all this together, we can create a system that is repaired in the way that we want it to be,” Rees affirmed. “From the community, to the international, from the financial and economic, to the funding of grassroots, we must fund real human rights attainment for political realisation of our ideals.”

“We also need to move the money,” said Rees. “We can move the money by intelligently working with those who have the money – the Sustainable Development Goals, the trillions of dollars in international financial institutions, development banks, and otherwise – so this money is used as drivers for social change not conflict.” 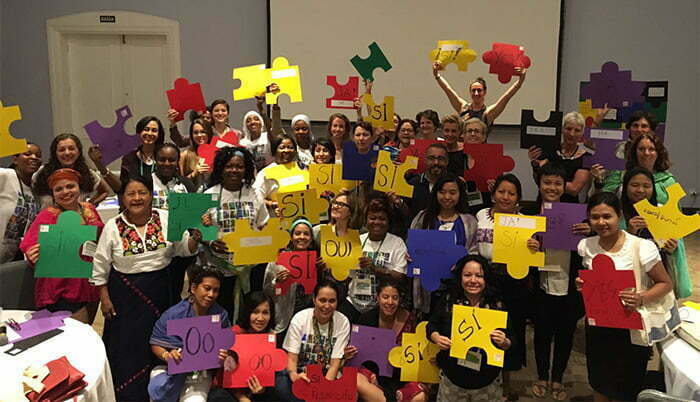 Join us in sharing the video (available in English, Spanish, Arabic, Portuguese and French) and social media memes, and calling for your government to #MoveTheMoney!